New Delhi is quietly reclaiming its space in Asia by forging alliances with China's neighbours.
In a way, India is converting its much-talked about Act East Policy to Engage East Practice, says Nitin Gokhale, the well-known strategic affairs expert. ​As the world's attention remains focused on the increasingly bitter standoff between India and China over a stretch of plateau that belongs to the tiny Himalayan kingdom of Bhutan, New Delhi is quietly reclaiming its space in Asia by forging alliances with China's neighbours.

In a way, India is converting its much-talked about Act East Policy to Engage East Practice.

Vietnam and Myanmar -- to name just two countries -- have of late reciprocated India's effort to recalibrate their respective relationship.

Myanmar, sandwiched between China and India, is another country seeking to balance its ties with the two Asian giants.

New Delhi, aware of deep inroads that China has managed to make amongst the top military leadership in Myanmar since the late 1980s, has been making conscious effort to woo the generals back into its fold for some years now.

And what better way to reach out to the junta than to engage in some military diplomacy?

And fittingly, he is being accorded a red carpet welcome by the Indian defence establishment.

The senior Myanmarese general will arrive directly in Gaya. The optics is important to note here.

For most Myanmarese nationals, a visit to the sacred Buddhist shrine at Bodh Gaya is a high point in their life. The general and his wife are scheduled to perform a puja at the shrine on Saturday, July 8.

In a significant gesture, General Rawat has flown down to Gaya. He will host a dinner in the visiting general's honour before he flies to Ahmedabad.

In the Gujarat capital, the Myanmar military chief is scheduled to visit solar farms, take a look at some small and medium industries and then fly to Pune on his way to the Indian Army's Armoured Corps School and Centre at Ahmednagar.

From there he will fly to Vishakhapatnam to hold talks with top Indian Navy officers at the Eastern Naval Command headquarters before coming to New Delhi.

In the capital, the senior Myanmar general is scheduled to call on Prime Minister Minister Narendra Modi, National Security Adviser Ajit Doval among others.

On the last day of his stay in India on July 14, the NSA is expected to host a dinner for the senior general. This will be their third meeting in the past two years.

In July 2015, Doval and Foreign Secretary S Jaishankar had flown to Myanmar to brief the senior military leadership about India's surgical strike against a north-eastern insurgent group.

Within a month of that meeting the senior general had made a trip to India visiting Goa and Bengaluru among other places in July 2015.

That he is visiting India again -- this time on a longer trip -- is one indication of the gradual recalibration on ties between India and Myanmar over the past few years.

Vietnam is another country India is vigorously engaging with in recent years.

On Thursday, July 6, in what is seen as a strategically significant move, Vietnam renewed a license granted to an Indian oil company, ONGC Videsh, to explore oil block 128, Reuters reported.

The oil block is in the South China Sea, an area that has seen several disputes between China and her neighbours like Vietnam and the Philippines.

Part of that block is in the U-shaped 'nine-dash line' which marks the vast area that China claims in the sea, a route for more than $5 trillion in trade each year in which the Philippines, Brunei, Malaysia and Taiwan also have claims.

Given that India had more or less withdrawn from the exploration effort some years ago, but has now expressed renewed interest in the block is clear indication that the decision is driven by strategic rather than commercial considerations since return on investment in the area is minimal.

India-Vietnam ties have been on the upswing over the past decade. However both New Delhi and Hanoi are less reticent in talking about their growing strategic relationship than before.

Vietnamese Deputy Prime Minister Pham Binh Minh told a forum in New Delhi this week that India was welcome to play a bigger role in Southeast Asia -- and specifically the South China Sea.

Hanoi's growing defence and commercial ties with India are part of its strategy of seeking many partnerships with big powers while avoiding formal military alliances.

India is also seeking to upgrade its military assistance to Vietnam.

Last year Prime Minister Narendra Modi, who became the first prime minister to visit Vietnam in 15 years, announced $500 million worth of line of credit to Vietnam to buy military equipment.

This coming on top of a $100 million assistance given by India to buy naval patrol boats in 2014 has taken the India-Vietnam strategic and defence partnership to the next level.

Beijing, prone to bullying smaller neighbours into submission through a mix of cheque book diplomacy and military heft, is surely watching these maneuvers by New Delhi even as it seeks to find an honourable exit from the Sikkim standoff.​ 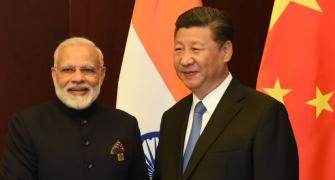 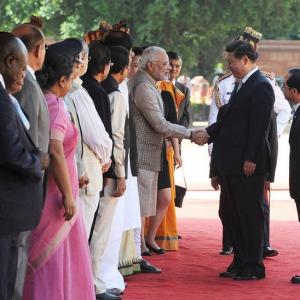