News
Business
Movies
Sports
Cricket
Get Ahead
Money Tips
Shopping
Sign in  |  Create a Rediffmail account
Rediff.com  » News » India is profoundly sick and I don't know if it will get better

'When a country's humanity and morality levels are this low, it has a disease so deadly that it could die,' says Mitali Saran.
Illustration: Uttam Ghosh/Rediff.com 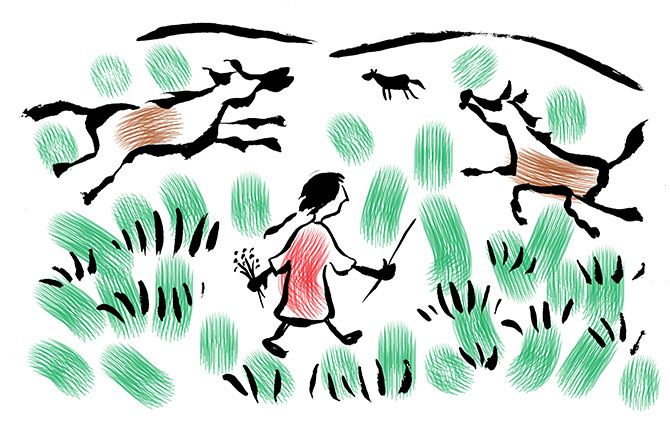 I hadn't scheduled a health check in 14 years, because between one thing (drinking) and another (smoking), I hadn't had the time.

My mother nagged me so much that finally last week I bit the bullet and had a top-to-toe medical exam, shaking in my shoes because the Internet had already confirmed that I was mortally ill.

It came as a great surprise to me, therefore, and greater still to my mother, to learn that I'm healthy as a horse.

And yet this week I am sick as a dog. Sick to my stomach, in pain, and physically nauseated.

I am ill with rage and horror. Because I am reminded yet again that India is profoundly sick, and I really don't know if it is going to get better.

I cannot get away from the bright little face of the eight-year-old nomad girl in Kathua who went looking for her horses.

I can't stop thinking of what she might have thought or felt during the week that she was abducted, tortured, starved, drugged and gang-raped before she was murdered.

I cannot get past the fact that the men who conspired to rape and kill her and cover up the crime are policemen and ex-government officials.

I cannot stop reciting the barbarism detailed in the chargesheet.

I cannot forgive the lawyers and politicians who marched in support of her assailants, or the people attributing outrage to communalism and political opportunism.

I cannot take my eyes off the political leader who talks about the importance of every Indian but hasn't found it in his small, sterile heart, lodged in that 56-inch chest, to say one word about this little girl.

I cannot get away from the 16-year-old girl in Unnao, seeking justice against her smirking BJP politician rapist whom the police have declined to arrest.

Her father, who went to appeal to the police, died in police custody.

I don't want to get away from any of it, and I hope you don't either.

Forget turning away -- don't even blink, because we cannot afford to miss any fragment of this.

Prop your eyelids open with matchsticks if you have to, to recognise how this country mauls its women and children and throws them away like garbage.

It hangs them from trees, shoves iron rods into their bodies, rapes them, melts their faces with acid, keeps them poor and ignorant, culls them and obsessively controls them.

It has done this for so long that we call it 'social and cultural tradition'. All that worshipful hooey about mothers and goddesses? That is called 'overcompensation'.

Nirbhaya 'asked for it'.

The Unnao victim is 'low class'.

The child in Kathua was just some poor kid -- scrap paper on which one group of men drafted hate mail to another.

They were all treated like dispensable junk. There can be no justice just enough.

You know what is worse? The fact that now it takes pro-rapist marches to get us going. That is how apathetic we have become towards the regular, undefended, rapes of children as young as a few months, which happen everyday, just as women, the poor, Dalits, and minorities are terrorised and killed every day.

We are unmoved by barbarity, and now we are starting to valorise it.

My doctor said my vitamin D levels are low, and gave me a course of tablets.

But when a country's humanity and morality levels are this low, it has a disease so deadly that it could die.