'Modi is larger-than-life, but not invincible. Yet,' says Saisuresh Sivaswamy.
Illustration: Dominic Xavier/Rediff.com The 5-state election results are a mixed bag for the Opposition. Uttar Pradesh went true to form, standing firmly by Prime Minister Narendra Modi who it backed overwhelmingly in 2014, as did Uttarakhand which ejected the Congress for the BJP.

Punjab sprang a surprise in giving a clear majority to the Congress, despite the old newbie Aam Aadmi Party's presence in the fray.

Goa seems like a close battle, as does Manipur.

It is the electoral outcome in Uttar Pradesh, which gave a two-thirds majority for the BJP, that should come as a huge cause for worry for the non-Bharatiya Janata Party Opposition.

Nay-sayers had their own theories as to how the BJP would perform, but no one, it seemed -- neither journalists nor psephologists, or even the 'experts' -- could see how well the BJP would do in the state.

All the crowing in the saffron camp, and the pall of gloom that has descended over the Opposition ranks will suggest that all is lost, that there is no stopping Modi the campaigner.

The strong and clear verdict from Maharashtra's local elections last month, as well as from Odisha, only reinforces the view that Modi is unbeatable.

Definitely, the prime minister's aggressive campaign style, plus his high energy that belies his 66 years, has left the Opposition scrambling to save their seats.

But the tactic to stop the Modi juggernaut lies in the little clues that dot this very electoral outcome, and the Opposition needs to pay attention to it to stay in the game.

Either that, or be reduced to the ridiculous spectacle of Mayawati weeping on live TV that the electronic voting machines have been tampered with.

So what should the Opposition do to stave off the Modi threat and to remain relevant?

Junk outdated rhetoric like 'secular forces versus communal forces', it is as anachronistic as 'garibi hatao.'

The voter has changed, the voter's concerns have changed, and Modi has been quick to grasp it.

So why does he still resort to using phrases like 'qabristan/shamshanghat/SCAM' or his major domo Amit Shah talk of 'KASAB,' you wonder? Because that is the trap the duo is laying for the Opposition, to keep them trapped in the same old lingo while they themselves move on.

For Modi and Shah, these are strictly one-use catchphrases which remain stuck with the Opposition far longer.

Go all guns blazing. For the BJP under Shah-Modi, it does not matter whether it is a parliamentary election it is fighting or the zilla parishad poll, the amount of hard focus and mobilisation it puts into each battle, treating it as if it is the last one, is worthy of emulation.

The party organisation is thus a veritable wermacht, with absolutely no respite. There can also be no better way than this to prevent complacency setting in, or the cadres getting restive at the inactivity and lack of seriousness in purpose, which afflict many political parties.

Modi is not your target, so don't turn him into one.

You may not have noticed it, but since 2002, when Modi became Gujarat chief minister, he has always faced tremendous criticism, non-stop verbal attacks, even abuse.

Even now social media is full of apoplectic Indians showering epithets on him, and political leaders too pitch in every now and then with their own gems.

Again, you may not have noticed it, but since 2002 Modi has not faced a single electoral setback.

You would think all this ganging up against him would lead to a consolidation of votes against him, but on the contrary he only seems to have gone from strength to strength.

The harder you hit, the stronger he grows. So avoid making him your target.

Akhilesh Yadav certainly tried to provide a far better administration than his father did, or what he himself was allowed to do in the first part of his government.

Can good governance assure re-election? Not by itself, no.

With BJP 2.0 in place, there is need for a combination of factors to win elections, and good governance is only one element.

After all, what do you crow about when your administration is crap?

Not only do you have to craft a message, you also have to motivate the electorate into buying into it.

Political parties are still stuck in votebanks and captive votes, when Shah-Modi have shown that all these constructs can be smashed to smithereens, so it is a game anyone can play.

Bihar's Nitish Kumar first saw the Modi threat looming, and realised that the ground under his feet had shifted.

So he did the next smart thing, and went over to political adversary Lalu Yadav to convince him to join hands to take on a common enemy.

Good for him that the latter, being an astute politician despite coming across as a jester, saw the threat too and went along, and that's how Shah-Modi blitzkrieg was halted in Bihar.

To be fair to him, young Akhilesh Yadav too saw the same threat in UP, and also realised that like in Bihar only a common front can prevent the BJP from rolling into his state.

Unfortunately for him, the party he chose to link up with, and give away 100+ seats to, was a spent force.

The electoral outcome in UP would have been vastly different had the SP, Bahujan Samaj Party, Rashtriya Lok Dal and Congress tied up and put up common candidates.

A one-on-one, Nitish and Lalu had shown, has the potential to halt the BJP chariot in its tracks.

Given these figures, what if the SP, BSP, Congress and RLD had formed an alliance in UP, given their 52.2% voteshare on paper?

Even making allowances that alliances don't mean vote transfer, the combination itself would have been formidable, and unnerved the BJP.

So, to the question 'Can Modi be halted?' the answer is, yes, he can be stopped.

But will it happen?

No. For, given that our political parties usually put ego before survival, it is highly unlikely, and Shah-Modi will continue to have a merry run. 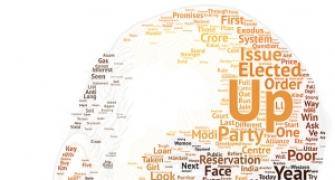 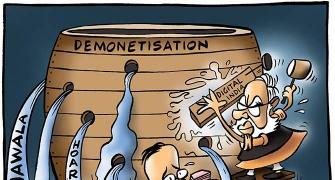