News
Business
Movies
Sports
Cricket
Get Ahead
Money Tips
Shopping
Sign in  |  Create a Rediffmail account
Rediff.com  » News » How the world was Trumped

'An America at war with itself, groaning under a mounting debt, with woolly-headed economic policies of a neophyte president who is more feared and suspected among the comity of nations does not augur well for the world.'
'It would be well justified in asking,' says Shreekant Sambrani, '"Is this how you expect to make America great again, Mr President?"' 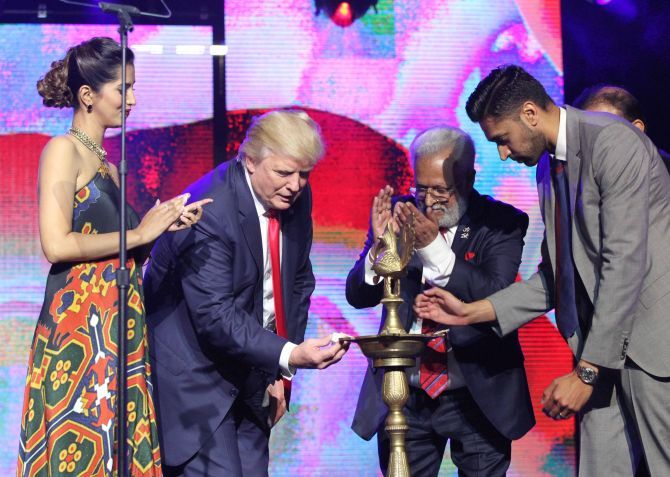 Three weeks ago, after the last presidential debate between Donald Trump and Hillary Clinton which she had won according to instant polls (as she had the earlier two as well), I wrote 'A (Trump) victory in November, though not impossible, now seems in the realm of statistical improbability.'

Well, that improbability is now a reality and come January 20, 2017, Donald J Trump will be the 45th president of the United States, warts and all.

Two issues need to be addressed: How did this result, which can only be termed bizarre in light of all available evidence, come to pass (as well as its corollary, how did everyone except the staunchest Trump loyalists got it all wrong) and what does this forebode (I use the word advisedly) for the world in general and America in particular.

When Donald Trump announced his candidacy for the Republican nomination, no one gave him much of a chance to get it.

The field was already crowded with experienced candidates of proven pedigree. What could a maverick who had no experience of any electoral or appointive public office or military do, except be of nuisance value, was the general line of thinking.

There had never been a candidate like him before.

Even Reagan, otherwise an outsider, had been the governor of California for eight years before he ever entered the race.

Emerging victorious over 16 other Republican candidates was the first upset Trump caused. He did so with a hitherto unknown mix of swagger and crudeness.

He had sensed that Middle America was seething with anger at the establishment. Those with relatively poor education had seen their blue collar jobs either disappear or remain low paying, while bankers and other highflyers were leading the easy life.

Immigrants, they thought, were crowding them out of their rightful claims and boosting crime in the bargain.

So the Trump promise of building a wall at the southern border to keep the bad Latino hombres out and banning Muslim immigrants was sweet music to their ears.

President Barack Obama and his chief lieutenant, Hillary Clinton, were prime villains of the piece.

The Republican establishment had surrendered meekly to them. Only Donald Trump with his vast experience of running a multi-billion business empire (according to his own, largely unsubstantiated, claim) could set this right.

But he was still an underdog against the Democratic candidate, the former secretary of state Hillary Clinton, with her tremendous experience. After all, in President Obama's words, she was 'the most suitable candidate for president ever, better than me, better than Bill.'

She was in preparation for the job ever since Bill Clinton won the presidency in 1992. Her road was certainly long and winding. She had to overcome many a scandal and persons to get there: Whitewater, Vince Foster (the lawyer whose suicide remains unexplained), Travelgate, White House intern Monica Lewinsky, the special prosecutor Kenneth Starr, all in the last century, and then Barack Obama, Benghazi, e-mails on a private server, Bernie Sanders, Donald Trump, James Comey the boy-scout FBI director, and that ever clear and present danger, William Jefferson Clinton himself, he of the countless 'bimbo eruptions.'

So Trump did what he was best at: Engage in invective. No insult was too low, no group worthy of respect, and no tradition worthy of honour for this misogynist racist bigot of a candidate of the party of Abraham Lincoln.

Defying all expectations, he retained the rock solid support of 40 per cent of likely voters throughout the long, gruelling campaign. This base did not trust politicians, media, big business or any part of the establishment. Trump appealed to their basest fears.

Revelations of his tax dodges, or his serial sexual overtures, or his extreme positions, or his abusive language had no effect on his loyalists.

Despite the ups and downs of the campaign, his challenge remained serious.

Clinton's own indiscretions, chiefly the cavalier manner in which she dealt with her e-mails during her tenure as secretary of state added fuel to fire Trump lit.

To him she was a criminal who needed to be locked up and should not have been allowed to run.

The campaign then slid into an exchange of insults and innuendoes, the very worst in modern history.

Elections are normally considered beauty contests among rivals; this one turned out to be a right royal unpopularity contest.

Apart from the scandals from the first Clinton White House and the email imbroglio, Clinton's copybook was smudged largely because of her husband.

The nexus between her many foreign trips during her stewardship of the state department (often followed or preceded by Bill Clinton's) and the highly lucrative business and/or speaking deals benefitting Clinton cronies as well as the Clinton Foundation and Mr Clinton himself raise disquieting questions of conflict of interest or worse.

Her own highly paid speaking engagements with large financial institutions after 2012 do not sit well in the post recession era. There may be no smoking gun, but as Peter Schweizer says in his 2015 book Clinton Cash, 'The Clintons aren't stupid people. They know the law and take pains to operate within it.'

That still left an odour, strong as it turned out.

The Trump candidacy was pure television. The ever-present Cyclops of TV loved this one-time reality show presenter. His puff of orange hair, his accent and his repeating for emphasis all grew on audiences. Why, even this writer who was never a Trump fan found amusing his remark 'I am here by myself -- no guitar, no piano, only me' and the gestures that went with it following Beyonce's appearance for Clinton.

The media, in short, lapped up every insult he dished out, every injury he inflicted and every misrepresentation he offered.

By the time it resumed its expected adversarial role and started unearthing and checking facts, as it had done in all earlier campaigns, the Trump candidacy was too well-entrenched.

Any inconvenient facts became to him and his legion of followers further proof of media bias and corruption.

All accusations of wrongdoings, often with some evidence in support as in case of victims of his unwanted sexual advances or his famous Access Hollywood tape, were so much water off a duck's back.

Trump's tarring and feathering did not stop with Clinton. It extended to almost all of Washington DC, which he termed a swamp in need of draining, his critics within his own party, the administration and even the judiciary.

He famously asserted that the elections are rigged without even a shred of evidence and demurred from expressing readiness to accept an adverse result on November 9.

In the final analysis, the 2016 result is as much a tribute to Trump lone-wolf bravado as it is a scathing criticism of the failure of the far better funded and orchestrated Clinton campaign.

Despite the galaxy of celebrity surrogates from the president to Hollywood and rock stars, it failed to enthuse its core constituency as much as was expected.

In state after state including some Democratic bastions of yesteryear -- Florida, Ohio, Pennsylvania, Michigan, Wisconsin, to name some -- it could not galvanise the Obama coalition of the two previous elections to the extent needed to overcome the late Trump surge.

Scholars will doubtless spend years sifting through evidence to discover the minutiae of reasons for this most astounding upset of all times (not excluding the Brexit surprise earlier in the year), but the sum and substance of it would not be much different from the above.

This election result evokes the overwhelming reaction of weariness following an exhausting campaign.

The choice was always between two odoriferous candidates.

Worldwide elation greeted Obama's election in 2008. He was a fresh young candidate, highly intelligent, squeaky clean and an incredibly effective communicator. Above all, he embodied hope and his slogan, 'Yes, We Can!' became a clarion call for change everywhere.

To say that the Trump victory is the polar opposite of Obama's would be an understatement. It induces a great deal of fear and loathing as a first reaction, and there is no exaggeration.

The global stock markets taking a huge beating as a possible Trump became clearer is an indication of this.

Consider most of Trump's policy pronouncements: Renegotiate trade relations, including those with China, make long-time allies in Europe and East Asia pay for America's security cover, deport millions of illegal immigrants first and ask questions later, among others.

Any one of these is so radical a departure as to cause headaches to most global leaders. Add to that the fact that almost nothing is known about who his advisors and cabinet members would be.

Statecraft is not something that can be done cavalierly, in the manner of the ever-dubious functioning of Trump businesses, many of which have been stupendous failures.

The bitterness of the campaign will linger on in Congress. It would not be surprising if the Democrats smarting from the unexpected defeat in the presidential and Congressional election were to give a short shrift to the conventional honeymoon period.

The experience of the Obama presidency and Indian parliamentary proceedings makes it abundantly clear that winning a popular vote does not guarantee smooth governance.

An America at war with itself, groaning under a mounting debt, with woolly-headed economic policies of a neophyte president who is more feared and suspected among the comity of nations does not augur well for the world.

It would be well justified in asking, 'Is this how you expect to make America great again, Mr President?' 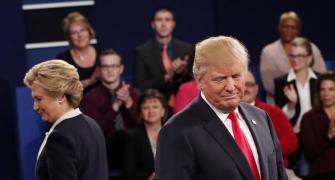