'The stage is set for increasing tensions in a highly volatile region as crucial as ever from a geopolitical standpoint,' predicts Claude Smadja. 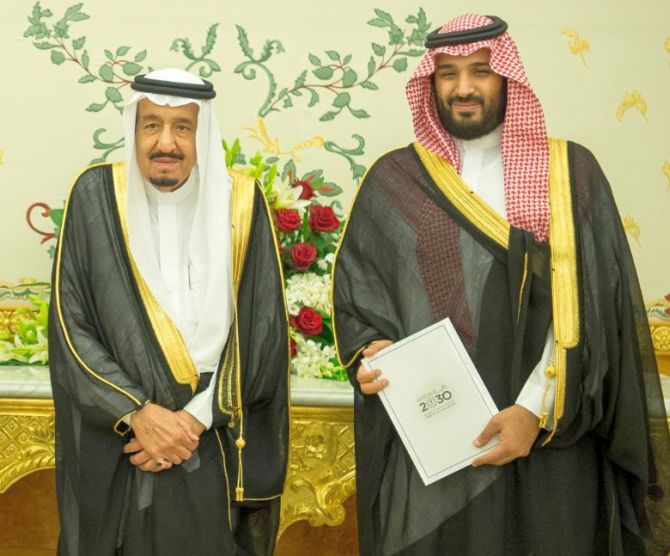 Crown Prince Mohammed bin Salman is not only trying to reorient Saudi Arabia, but also endeavouring to reshape the geopolitics and balance of power in West Asia. And he is in a hurry.

While MbS, as he is nicknamed, is a very shrewd, ruthless and bold individual as well as a risk-taker -- evident from his breaking away from the traditional mindset of Saudi rulers -- yet successfully tackling domestic and international challenges will require his utmost capabilities.

Since elevated as co-crown prince by his father, King Salman, MbS has systematically established himself as the de facto ruler of Saudi Arabia, without waiting for the abdication or death of his octogenarian father.

Becoming rapidly the key decision-maker for the kingdom's economic, foreign and defence policies, he eliminated the other co-crown prince, his cousin Prince bin Nayef, snatching also from him the control of the security services.

He has restricted the pervasive power of the religious police and allowed Saudi women to drive -- a very potent symbol of change -- scoring points with the country's middle class bristling at the strait-jacket imposed on Saudi society by the Wahhabi clergy and the ultra-conservatism of the monarchy.

MbS knows that these kind of moves -- and similar ones that will have to follow -- are absolute prerequisites if his ambitious programme of economic reform to wean the kingdom away from an unsustainable over-dependence on oil is to stand a chance of success.

The latest step, three weeks ago, has been the most spectacular -- the arrest of more than 200 top personalities (princes, business leaders, former top officials) considered until now as untouchable on the accusation of corruption.

This was the perfect way of killing three birds with one stone: Neutralising potential opponents as he prepares to ascend to the throne; showing to the middle class and other segments of the population that he is serious about fighting endemic corruption, creating a modern economy and making the country enter the 21st century; and, last but not least, taking from Prince Miteb bin Abdullah, now in prison for corruption, the control of the National Guard, the elite unit in charge of the protection of the monarchy, and thus bringing the whole military and security apparatus under his control.

Many Saudis and foreign observers have been worrying at MbS' brashness and the destabilisation risks that his moves are creating for Saudi Arabia and, indeed, West Asia.

However, he might not have any other choice than moving fast and taking the risks given the daunting challenges he is facing and the fact that he needs to 'lock in his power before his father King Salman's abdication or death.

And there is some systematic approach behind the brashness and impatience as, in the past few months, MbS has been putting people loyal to him in a number of key positions in Riyadh as well as in the kingdom's provinces.

Transforming an economy based on oil rent and corruption and a society whose acquiescence has been either bought by subsidies or ensured by the Wahhabi obscurantist propagated not only requires major structural changes but also a radical cultural and societal transformation.

Since the launch of the Reform 2030 programme, deadlines for achieving some objectives have now been pushed back as unrealistic and some previously abolished subsidies had to be reinstated because of the social unrest their abrogation had created.

In the same way, the fight against corruption, which has been an intrinsic part of the system, is bound not only to be a difficult process but also to create many enemies waiting for the first opportunity to strike back.

There will be no shortage of members of the royal family, not speaking of rent-happy businessmen, willing not only to limit the scope of reforms but also to do whatever they can to bar the crown prince from ascending the throne.

This is where the international challenge undertaken by MbS comes into play.

The crown prince, in alliance with UAE leaders, is determined to draw a line against the expansion of Iranian power and influence in the region, and to reassert Saudi Arabia as a number one regional player.

He intends to reverse the strategic gains achieved by Tehran in Iraq and Syria with the defeat of ISIS and the consolidation of regimes in Baghdad and Damascus ever more closely allied to Iran and acting as its proxies.

MbS and the UAE rulers' decision to strangulate Qatar and force the regime there to distance itself from Iran has illustrated the decision to actively contain Iranian influence.

But the Saudis have also been very alarmed by the growing encroachment of Hezbollah -- another Iranian proxy in Lebanon and by the rapprochement between the Palestinian Authority of Mahmoud Abbas and the Iran-supported Hamas.

Hence the bringing back to Riyadh of Prime Minister Saad Hariri who had been unable to stop Hezbollah's advances, and the announcement, from the Saudi capital, of his resignation (Hariri has since returned to Lebanon and withdrawn his resignation).

Ditto for the summoning of Mahmoud Abbas to Riyadh to let him know in no ambiguous terms that Saudi Arabia will not allow the rapprochement between the Palestinian Authority and Hamas to be a cover for Tehran gaining more influence in Palestinian affairs.

MbS and his Gulf allies consider the expansion of the Shiite -- Iranian -- crescent of power encompassing Afghanistan, Yemen, Iraq, Syria and Lebanon a lethal threat to their regimes and seem ready for an open confrontation with Tehran.

They feel supported by the Donald J Trump administration which does not believe in any possibility of a 'grand bargain' between the US and Iran -- as the Barack Obama administration implicitly did -- and has taken a much more confrontational policy toward the Iranian regime.

All these moves may be taking Mohammed bin Salman into uncharted waters: The war in Yemen is going nowhere with ever higher casualties and the increasing desolation inflicted to the country. Not to speak of the drag on the Saudi finances already under stress.

Iran will continue to support the Houthi, Shia-led insurrection in Yemen and will not abandon its broader goal of asserting its prominence in the region.

The missile launched from Yemen, which landed close to Riyadh airport a few days after the Hariri's resignation, and the blasting of an oil pipeline in Bahrain look like warning shots from Tehran about the risks Saudi Arabia would run in case of a direct confrontation with Iran.

So far Tehran's response to the Saudi counter-offensive has been shaped by the desire to preserve its nuclear agreement.

However, neither Iran will renounce its objective of prominence in the region nor will Saudi Arabia, under MbS' leadership, backtrack on its will to block and reverse the Iranian/Shiite power grab.

The stage is thus set for increasing tensions in a highly volatile region as crucial as ever from a geopolitical standpoint.

Crown Prince Mohammed bin Salman has embarked on a course that, beyond his own personal future, will define the evolution of West Asia, with massive repercussions beyond the region.

Don't expect quiet moments in the period to come. 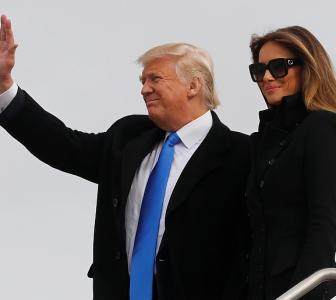