How JP helped the RSS

'Though the RSS honours Sardar Patel, who actually banned it, the real hero in the story of its rise is Jayaprakash Narayan,' says Vir Sanghvi. 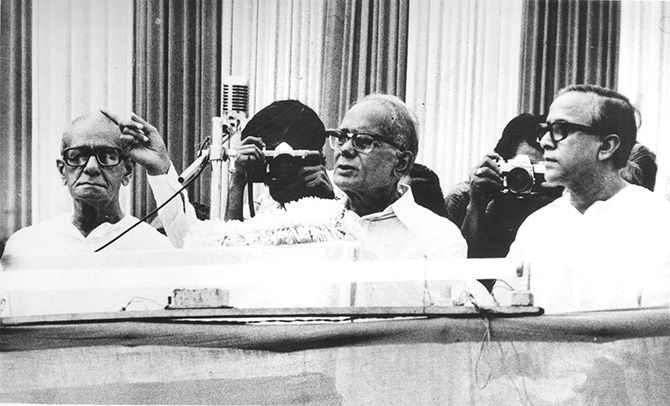 IMAGE: In just two years, Jayaprakash Narayan, seen here centre, with Marxists Jyoti Basu, right, and M Basvapunnaiah, took the RSS, which he once loathed, from the fringe to the centre of the political establishment.

When a book about the Emergency goes from quoting Jayaprakash Narayan on page one to talking about how Narendra Modi stoked 'Hindu majoritarian resentments against minorities to ride to power' in 2014 on page three, the reader may be forgiven for wondering about the motives of the author.

Gyan Prakash, the blurb tells us, is a professor of history at Princeton, but, equally significantly, was a member of the Subaltern Studies Collective and even co-wrote the screenplay for the film Bombay Velvet.

But such fears are misplaced.

This is a significant and thoughtful book that, while faithfully retelling the events of the Emergency, develops many themes about post-Independence India to put the Emergency in context.

In fact, I found the narrative portions about the Emergency the least interesting part of the book.

Does anyone really want to read 48 pages about the history of the Indian automobile industry and the Maruti project?

I guess it is important to understand Sanjay Gandhi's small car project, but does it need to take up eight per cent of the text?

The most readable and perceptive parts of the book are the ones where Prakash tries to explain how the Emergency was allowed to happen and where he suggests that the biggest gainer of that period was, actually, the Rashtriya Swayamsevak Sangh.

Prakash's thesis (entirely convincing and well argued) is that when independent India was created, its founders were intimidated by the size of the task they had taken on.

Prakash says of Nehru: 'While deeply conscious and proud of India's past, he was also aware of its stultifying grip, not least its ancient cruelties of caste and landed power. Somehow a population of multiple tongues, regional, religions and cultures had to be fused into a nation.'

Nor was the Congress's vision of an independent nation the only one.

There were competing visions and a real threat from the Communists who were advocating violent revolution and organising insurgencies.

Both Nehru and Sardar Patel believed that ordinary laws would not be enough to end the insurgencies.

Though the Congress had fought bitterly against the British Raj's preventive detention law, it brought the same law back in the 1950s.

Patel quoted Motilal Nehru to justify the law: 'When men would not be men and law would not be law, we feel justified invoking emergent and extraordinary laws.'

B R Ambedkar said that just as the US Congress had the power to suspend habeus corpus so must the President of India.

'Democracy in India,' he said, 'is only a top-dressing on an Indian soil which is essentially undemocratic.' 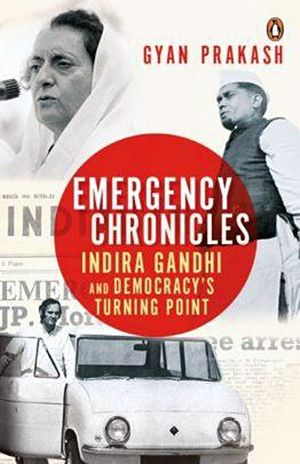 Prakash says that all three men believed that popular sovereignty alone would not be enough to keep the infant State free from instability and the horrific legacies of the past.

'The consequence,' he notes, 'is that the Constitution spoke in two voices -- that of the sovereign people and of the administration... The very plan of constitutional transformation required a powerful administrator.'

Nehru, Patel and Ambedkar had given the government vast administrative and coercive powers because they believed that no transformation of society was possible without a strong state.

Ambedkar and his fellow lawmakers "expected that the state would accomplish from above what society could not do from below."

In the hands of honourable men, these powers would be exercised responsibly.

After the assassination of Mahatma Gandhi, which led to widespread revulsion against Hindu fundamentalism, Patel banned the RSS.

He only revoked the ban when the RSS said that it would stay out of politics and remain a social and cultural organisation.

(Somewhere up there, Patel is probably giggling at the irony of his resurgence as an RSS icon!)

But once the coercive powers of state fall into the hands of someone without the scruples of Nehru, Patel and Ambedkar, you end up with the Emergency -- venal and immoral, yet fully sanctioned by the Constitution written by Ambedkar.

If you follow Indira Gandhi's rhetoric from the 1970s, a recurrent theme is her belief that the RSS is a dangerous organisation.

She believed (and perhaps Sonia and Rahul Gandhi still believe it) that the battle Nehru, Patel and Ambedkar were waging against the tyrannies of the past was being refought in India every day.

In her mind, the Congress and the political establishment represented the modern values for which the founding fathers had fought.

The RSS epitomised many of the things they had fought against.

JP was no lover of the Hindu right.

In 1968, he had written that the RSS had spawned the Jana Sangh only because it was under a shadow after Gandhi's assassination.

Later, Prakash quotes him as saying, 'The RSS people are outright reactionary, if not fascist. Jana Sangh would pounce upon Muslims.'

Nor was this an isolated view.

JP was merely repeating the conventional wisdom of the political class from 1948 to 1974.

Yet JP, more than anyone else, rescued the RSS from its position as an outcast and gave it the legitimacy it needed to enter the mainstream.

By 1974, JP had realised that his anti-Congress movement needed foot soldiers.

In March 1975, not only did he enlist RSS cadres, but he attended a Jana Sangh conference and thanked its members for their active participation in the movement.

When people pointed to his earlier condemnation of the RSS, he countered defensively: 'How can any party which has lent its support to Total Revolution be called reactionary or fascist?'

Pushed further, he said that if the RSS was fascist then 'I am a fascist, too.'

Mrs Gandhi, who had known JP since she was a child, wrote to him to protest.

But JP would not abandon the RSS.

In doing so, he became, at least in Indira Gandhi's mind, one of them; an advocate of the people who had opposed the new India that her father, Patel and the rest had dreamt of.

The RSS did well out of JP's sudden love for it.

The cynical view was that JP had become so determined to keep his Total Revolution movement alive that he was prepared to drop a lifetime of opposition to communalism and to the RSS to get the Sangh's cadres to swell the ranks of his followers.

But that, of course, was not how JP saw it.

When elections were called in 1977, JP asked the Jana Sangh to join the new Janata Party, cementing the RSS's position in the mainstream.

The RSS gained from this association.

During the Janata phase, the chief ministers of Rajasthan, Madhya Pradesh and Himachal Pradesh were all Jana Sangh men.

In just two years, from 1975 to 1977, JP had taken an organisation he once professed to loathe from the fringes of civilised society to the centre of the political establishment.

It was never clear that the RSS was as committed to JP as he was to it.

In 1975, a few months after the Emergency had been declared, RSS chief Balasaheb Deoras wrote to Mrs Gandhi from his prison cell, asking her to revoke the ban on the RSS.

Deoras began his letter by complimenting her on her 'balanced speech befitting the occasion' of Independence Day.

(The speech was the usual pro-Emergency propaganda.)

Three months later, he wrote to her again, asking once more to lift the ban on the RSS.

He began by congratulating her on winning her election appeal in the Supreme Court.

(She had changed the law retrospectively so there was no way she could have lost; but Deoras was not being sarcastic.) 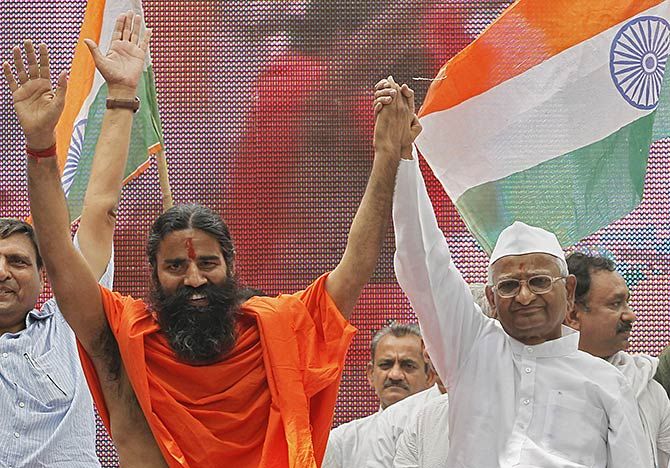 IMAGE: Kisan Baburao 'Anna' Hazare made common cause with Baba Ramdev, only to be overshadowed by Modi and the RSS. Photograph: Adnan Abidi/Reuters

Deoras did not have to worry for long about the ban on his outfit.

By 1977, when Indira Gandhi lost the election, the RSS was on the ascendant.

Since then, except for once (in 1984 when the BJP, the successor to the Jana Sangh, was reduced to two seats in Parliament), it has never looked back.

And though the RSS honours Sardar Patel, who actually banned it, the real hero in the story of its rise is Jayaprakash Narayan.

Prakash pulls out many instances of the critical role played by the RSS in the years since then.

It was not Narendra Modi who polished off the United Progressive Alliance in its second term.

That task had already been accomplished by Anna Hazare who successfully painted the government as irredeemably corrupt with his movement for the Lok Pal Bill.

Did the RSS provide the crowds for that movement?

Many people believe it did.

And certainly, Hazare was happy hosting the unspeakable Sadhvi Rithambara and, later, even made common cause with Baba Ramdev.

Eventually, Anna Hazare was forgotten and Modi and his RSS colleagues swept the country.

So yes, it is odd to find Narendra Modi's 2014 victory on page three of a book about the Emergency.

But Prakash makes it work.

He sometimes spends too long telling us what happened during the Emergency.

But he is at his best when he explains why it happened and where it took us.

This is an important book and one that deserves to be read and remembered. 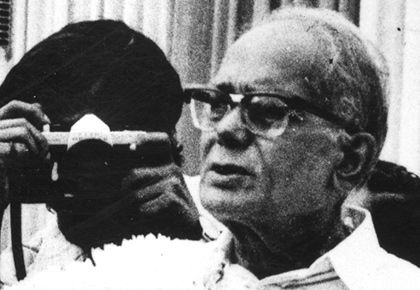 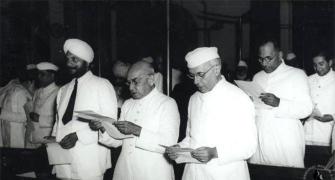 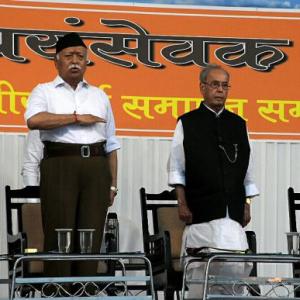 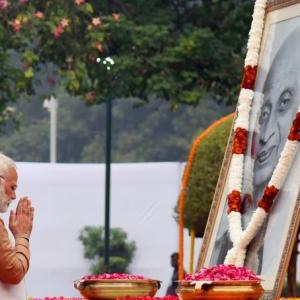