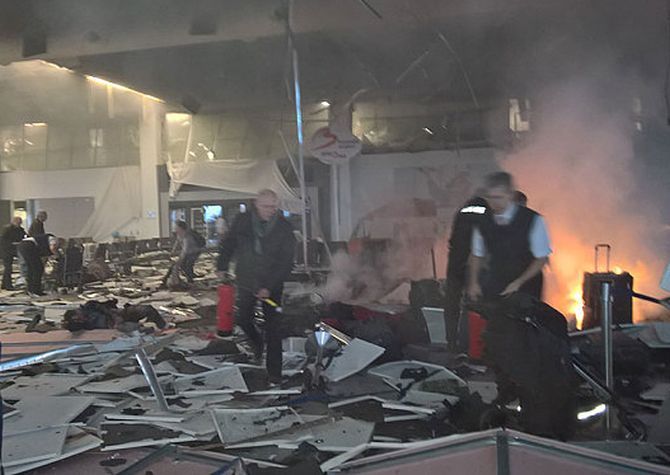 IMAGE: The scene at Brussels airport after the explosion. Photograph: Pavel Ohal

The Brussels terror attacks have several messages for the world and India.

Whatever happened in Brussels is nothing new for Indians as India has been living through this terrible experience for well over three decades. Yet, there is a blunt message for New Delhi.

It is this: The formidable terror outfit Islamic State or Daesh can strike at will, wherever and whenever, if only it is allowed to flourish and have a network of first sympathisers and then a terror module, or multiple terror modules.

This happened in Brussels because of its suburb Molenbeek which for long has been a beehive of jihadist activities.

Molenbeek has been a soft underbelly of the Belgian counter-terrorism apparatus and been touted as 'Belgistan' with Belgian security agencies doing little even after it came to light that many perpetrators behind last November's Paris terror attacks hailed from this area.

India's counter-terrorism network needs to keep potential jihadists under a scanner all the time. This is an arduous task, given the vast tracts of Indian territory being potential hubs of terrorists of the jihadist hue.

The Indian intelligence establishment is well aware of potential jihadist trouble spots across the country, and it goes to its credit that while Daesh has been bombing targets in the Western world with impunity, India has so far remained unscathed.

There is no room for complacency for the Indian security establishment, however.

The ongoing battle of jihadist forces against the West brings to the fore the irony of the West's convoluted logic of 'good terrorists' and 'bad terrorists.'

Obviously, Daesh cadres are 'bad terrorists' for the West. By the same logic, these terrorists should not be 'bad' for India as the Indian hinterland has not been targeted by them as of now. But this logic is laughable.

The Brussels terror attacks ring out several warnings for the developed world.

First and foremost, these attacks and the Paris attacks convey that Europe has become a prime target for jihadist forces. It is veritably a war of civilisations and the likes of Donald Trump stoke this fire on a daily basis.

Second, it has exploded the myth of the West turning the tables on Daesh. Three days before the Brussels attacks, the Belgian authorities captured Salah Abdesalam -- who was involved in the Paris attacks -- an event described as having broken Daesh's back.

Ironically, the Western intelligence community was agog with reports that the masterminds behind the Paris attacks were hiding in Belgium and planning more acts of terror. Despite that, they failed to prevent the Brussels attacks.

The fact that two public locations in the heart of Brussels were targeted close on the heels of Abdeslam's capture reveals that the jihadists are not only deeply entrenched, but also way ahead of the security agencies in this deadly cat-and-mouse game.

The Americans need to be worried about this. Though the United States has successfully prevented high profile terror attacks on the American mainland since 9/11, there is no room for complacency.

The jihadist elements wreaking mayhem in Europe and in Turkey, a NATO ally, may knock on American doors as well.

This is the most galling message to the West from the Brussels attacks. The time has come for the West to re-assess its 'good terrorists versus bad terrorists' theory. Terrorists are terrorists and they know no boundaries.

The question from the Indian perspective is whether the West will wake up to the reality of hardcore terrorism without going into the semantics of terrorists being good or bad! 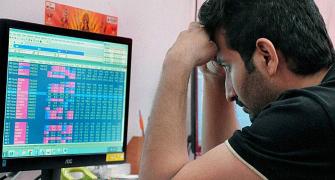 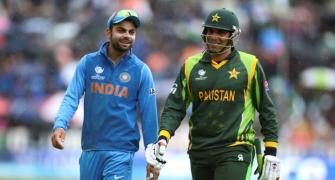 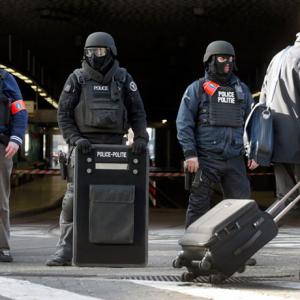