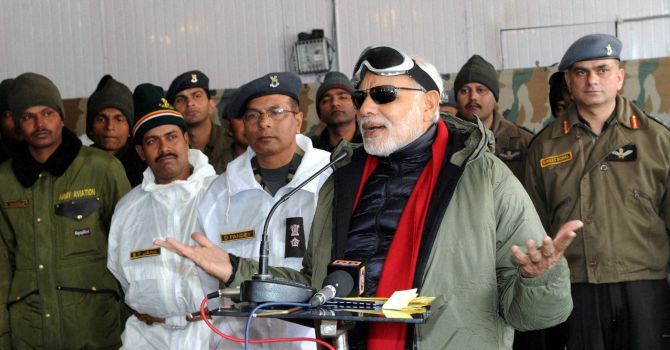 The Modi government has not lived up to the muscularity the prime minister promised while campaigning, says Ajai Shukla.

On Thursday, this government will mark its second anniversary in power. Even before chief minister Narendra Modi became Prime Minister Modi, serving and retired soldiers, sailors and airmen hoped that, unlike the United Progressive Alliance, the Bharatiya Janata Party would nurture a long neglected military.

How successfully has the National Democratic Alliance government met those expectations?

In electioneering, Modi talked up a muscular, populist alternative to former prime minister Manmohan Singh's widely ridiculed milquetoast image. (In the 1940s, HT Webster created the comic strip character, Caspar Milquetoast, describing him as 'the man who speaks softly and gets hit with a big stick.')

On September 15, 2013, two days after being anointed the BJP's prime ministerial candidate, Modi promised a huge gathering of military veterans in Rewari he would give the military its due -- both in money and attention.

Declared the future PM: 'My friends, the problem is not on the border, the problem is in Delhi... and, thus, we will have to find its solution also in Delhi! Until we do not have an efficient and patriotic government in Delhi, it does not matter how capable our military is, or how modern our equipment.'

Yet, the soaring expectations of the generals, admirals and air marshals who were jumping onto the BJP bandwagon were clearly unrealistic. Reading between the lines, the manifesto clearly prioritised economic development: 'Comprehensive national security is not just about borders, but in its broad terms includes military security; economic security; cyber security; energy, food and water and health security; and social cohesion and harmony. To effectively address the issues of national security, we need to address the issues of human resources, science and technology, system of governance and money.'

To dress this up, Finance Minister Arun Jaitley changed the basis of calculation this year, adding into the defence allocations the expenditure on the 'pensions' and 'defence ministry' heads, which had never previously been counted as a part of the defence budget.

This is not to suggest subterfuge; pensions and ministry staff expenditures legitimately belong to the defence budget. But doing that diverted attention from this year's reduced allocations and made the defence budget look fatter.

Even so, at 2.26% of GDP, this remains well short of the recommended allocation of 3% of GDP that defence planners say is needed over a sustained period to modernise India's huge inventories of obsolescent weaponry.

Furthermore, even more so than preceding governments, the NDA is failing to spend its allocations. On March 31, billions of unspent dollars were returned to the treasury.

A mere quarter is for 'capital expenditure', or modernising the army with new weaponry and kits. Despite India's cheap manpower, 55% of the budget goes towards the payroll. This ratio is being skewed further with the One Rank, One Pension scheme bloating the pension bill, and the Seventh Pay Commission recommending 15% salary increases.

Without higher defence allocations, there will be even less for capital expenditure. Modi seems aware of this conundrum, having warned his military commanders that growing numbers would adversely affect modernisation. Yet, there is no decisive move to trim the flab.

Meanwhile, equipment acquisition proceeds randomly. Like with the UPA government, contracts for new weaponry are pursued not on the basis of how urgently the item is needed, but in the leisurely order in which proposals clear the endless obstacle course of ministry procedure.

Every official knows the military's most critical needs -- artillery and air defence guns for the army; torpedoes, sonars and air defence missiles for the navy; and mid-air refuelling aircraft and strike aircraft for the air force, to name a few. There exists a fast-track procedure for urgent purchases.

Even so, glaring operational voids remain, providing reassurance to our foes.

Similarly, the military's operational capability remains hamstrung by the weakness of tri-service operational command and planning. The defence minister has repeatedly promised to address this issue; the PM himself told the military's top commanders on December 15 that: 'Jointness at the top is a need that is long overdue. We also need reforms in senior defence management... This is an area of priority for me.' Yet, action: Zero.

Admittedly, the defence ministry got off the blocks late, after languishing for almost six months under the additional charge of the finance minister -- something Modi has never explained. After Defence Minister Manohar Parrikar's appointment in mid-November 2014, he has tried to reform the way his ministry does business.

Despite opposition from his conservative bureaucrats, Parrikar has pushed through badly needed measures to partly level the playing field between the public and private sectors; and he is popular with private sector industrialists for his consultative approach.

However, he has promised more than delivered. A new defence procurement procedure (DPP-2016) has been only partly released. The ministry continues to grapple with an ill-conceived initiative to replace the public sector monopoly with a private sector one, dominated by a few 'strategic partners.'

A pragmatic 'blacklisting policy' remains blocked. Despite Parrikar's laudable backing of indigenous development programmes, and the policy prioritisation of 'Made in India' (designing and developing platforms in the country) over 'Make in India' (manufacturing in India to foreign blueprints), few such projects have been initiated so far.

The drive to reform defence policy and revitalise operational readiness is far from yielding results.

IMAGE: Prime Minister Narendra Modi with officers and jawans during his visit to the Siachen Glacier on the occasion of Diwali. Photograph: PTI Photo 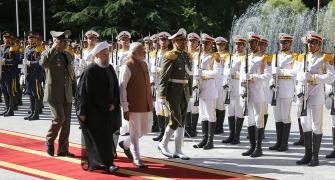