Greed for power behind Maharashtra break-ups 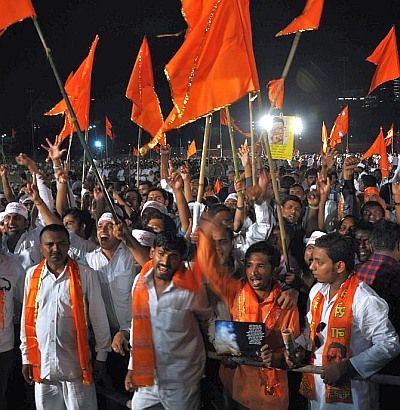 When political parties opt for alliances, it is to win an election, and if post-poll, to come to power by cobbling together the numbers to secure a majority. This has been a striking feature of Indian politics, throwing up such screens as ‘coalition dharma’ to hide all ills, including corruption, says Mahesh Vijapurkar.

The break-up of two alliances, the Bharatiya Janata Party-Shiv Sena on one hand, and Congress-Nationalist Congress Party on the other, and additions of smaller groups like the Samajwadi Party to Congress, and Raju Shetti and Mahadeo Jankar’s outfits to the BJP, makes the Maharashtra election a likely toss up for a variety of reasons.

For one, each party has to find a proper candidate to field in its former partner’s constituency. Not doing so negates the very purpose of a split. Having to energise the long dormant cadres, who were chaffing because of the partner’s leadership in the constituencies.

The alliance at the top does not generally translate to ground level conviviality because the patronage system works to promote the interest of the groups that gather around the MLA. The partner’s cadre is normally is dished out politeness, not benefits.

They may be elated at getting a ticket for one of their own to rival a former partner at the top, but having to build election machinery at top speed in a hurry is hard. Since not all parties provide all the requisite funding for their candidates, the hunt for funds gets difficult.

Of course the Shiv Sena, BJP, Congress and NCP may have had some Plan B in place because all seem to have worked toward wrecking their alliances than strengthening them. And yet there is suddenness to it all because it has happened much after the nomination process had commenced.

If one goes by what BJP has publicly announced, that it would not criticise Sena in its poll campaign, and if criticised it would chose not to respond, is all very well, a courtesy extended to a potential post-poll ally. That is going to be a hard bargain to keep. A lot is said in the heat amid the dust of the campaigns.

In so far as the Congress and the NCP are concerned, no such niceties have been promised. Expecting it is also naïve because despite being in government for 15 years, they have been at each other’s throats. The comment that the state had two governments, one run by either party, is not invalid.

When political parties opt for alliances, it is to win an election, and if post-poll, to come to power by cobbling together the numbers to secure a majority. This has been a striking feature of Indian politics, throwing up such screens as ‘coalition dharma’ to hide all ills, including corruption.

Pre-poll alliances are on the basis of the strengths the respective parties bring to ensure victories for their candidates. They are dependent on the ‘electoral merit’ –an Indianism in political vocabulary -- and the profiles of the constituencies. When they broke their ties on Thursday, it was largely on who would get to be the chief minister.

Intra-alliance competitiveness was so strong that the talks were designed to desultory except for the showcasing for the media -- remember, Uddhav Thackeray, Amit Shah, Sharad Pawar, and Sonia Gandhi were hardly involved in it if they had wanted the alliance to survive.

Talks seem to be designed with the intent of breaking the alliances or deciding which of the two among each of the alliances would emerge the big brother if it survived. They were all bent on queering the pitch for the other, making it for the biggest attempt election-time sabotage of the partner’s chances.

The nuggets that emerged into public domain showed the absurdity of the way the talks went. Shiv Sena was keen on getting at least an informal assurance from the BJP that it would allow Thackeray to stake a claim for chief ministership even if BJP won more seats than Sena.

At one point, an exasperated Raju Shetti, MP and leader of the Swabhimani Shetkari Sanghatana suggested chief ministership for Republican Party of India’s Ramdas Athavale if the alliance won, Mahadeo Jankar the deputy’s job. His thrust was at making the bigger partners realise that winning the election was more important now than who go the top job.

Political parties having aspirations to power and individuals to high offices are normal, but the NCP floated the demand:  Congress and NCP get the chief minister’s chair for half a term each but did not get down deciding who get the first shot. That showed what drives politicians -- power, not opportunities to govern.