'This year, it may be pertinent to look at some of the myths that invoke her warrior form, where she manifests herself as Shakti, the underlying strength in all humanity,' says Arundhuti Dasgupta.
Illustration: Uttam Ghosh/Rediff.com 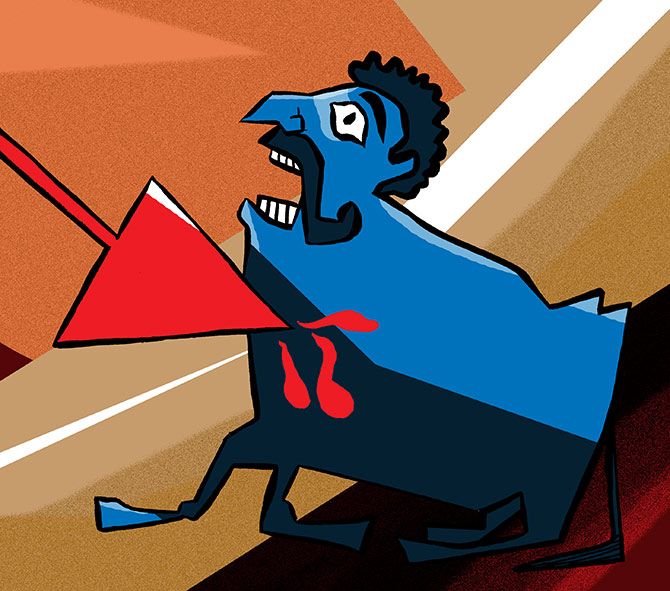 It is that time of the year when the goddess is worshipped in several parts of the country. But this year, it may be pertinent to look at some of the myths that invoke her warrior form, where she manifests herself as Shakti, the underlying strength in all humanity. #MeToo, anyone?

The goddess in India, as in Ancient Egypt and Greece, appears before us in many forms. So she is the prosperity-endowing Lakshmi as much as she is the bloodthirsty Kali or Chandi.

In many myths, especially older ones, the goddess appears as a dual divinity. She is both a generative and destructive force and in this form, draws from the archetype of the earth mother who can be both nurturing and calamitous.

For instance, the Greek goddess Artemis is the goddess of childbirth and death and disease (for females).

Joseph Campbell (Primitive Mythology) says 'We find the imagery of the mother associated almost equally with beatitude and danger, birth and death, the inexhaustible nourishing breast and the tearing claws of the ogress'.

Durga and Kali are examples of the above in India; Hathor in Egypt and Gaia, the Greek earth goddess, would fit the same frame.

Durga is both a mother goddess, who comes visiting her family on earth every year, and ruthless killer of demons on the battlefield.

Among the most enduring myths around her is the slaying of the buffalo demon, Mahishasura, which also earns her the epithet of Mahishasuramardini.

Her story appears in several texts, but the most detailed version of the battle is in the Devi Mahatmya.

In this version, Durga was sent to the battlefield by the entire pantheon of gods to defeat Mahisha, who wanted to be king of the heavens. A boon from creator god Brahma had granted him conditional immortality; no man or god could kill him, death would come only by a woman's hand.

But when Durga appeared on the battlefield, the demon, instead of fighting her with the full force of his vast army, began a courtship dance. He sent his generals and aides to woo the goddess on his behalf and when all failed, stepped out to win the goddess with his riches, his powerful persona and undying love for her.

But Durga rejected him and in his anger he attacked her, bringing about his end.

This myth offers many meanings. It has been used to show how absolute power leads to arrogance and destruction. Durga has also become a metaphor for military success.

In the Ramayana as told in the Kalika Purana (not the Valmiki version), Durga comes to Rama's aid on the battlefield and after Ravana was killed, the gods led by Brahma held a special worship for her.

Across the ancient world, the power of goddesses is the subject of many narratives, but so is the underlying acceptance of the fact that the woman (goddess or not) is to be won by a man or god.

In Scandinavian mythology, Freyr is the god of fertility and plenty and an all-powerful figure. He was smitten by the underworld giant Gerd who did not reciprocate his feelings. Freyr offered Gerd all the riches at his disposal and when that failed threatened her with the sword.

But she still didn't relent until a friend of the gods and giants, Skirmir, stepped in and convinced her to give in to the god or else the giants would be wiped out.

One rule for the gods and another for the giants and demons, discrimination was woven into the social fabric from the start.

In many societies, the nature of the goddess changed as men took control of the social structure as priests, bards and kings.

Durga, for instance, was merged with the more benign form of Parvati, mother to a brood of goddesses and gods.

In Indonesia, a poem composed sometime in the 14th century laments the fall of Uma, the wife of Bhatara Guru who was unfaithful to her husband. She is cursed by her husband and turns into a demoness called Durga with huge flaring nostrils and patchy skin who is forced to live in the graveyard for 12 years till she is exorcised of her sins by Shiva.

For a society that was keen to punish adulterous women, this myth served as an effective warning.

Maybe it is time to flip the old myths and find some new meanings and metaphors to help us navigate modern times. 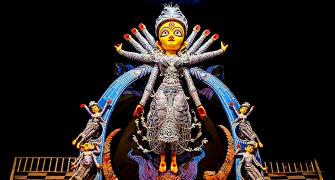 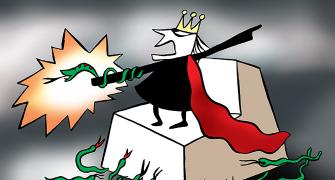