News
Business
Movies
Sports
Cricket
Get Ahead
Money Tips
Shopping
Sign in  |  Create a Rediffmail account
Rediff.com  » News » Donald in the House: What Indians must know

Donald in the House: What Indians must know

'It behoves us in India to watch how the US is pushing back.'
'It's a lesson in rising to the defence of Constitutional values when the administration won't,' says Mitali Saran.
Illustration: Uttam Ghosh/Rediff.com 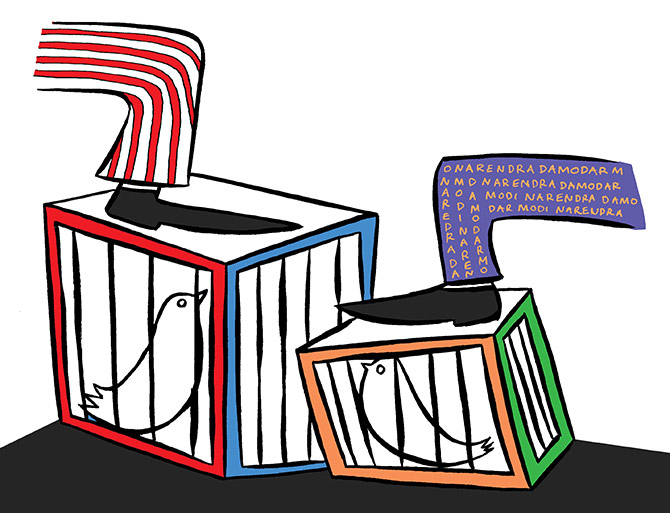 So the USA did actually go there -- The Donald is in The House.

He has pissed off the CIA.

He's planning to start building the wall in a month.

He's into bringing back torture.

And, true to his female-rating, daughter-checking-out self, he has blocked federal funding to organisations that help women access information on abortion.

You have to presume that compulsive tweeting about how he won the popular vote, not Hillary Clinton, falls under doing the job well.

That the American press has decided -- albeit belatedly -- to unitedly fact-check every statement, and call out every official infraction of data, law, and civil rights, instead of just chase TRPs, is heartening.

But that is cold comfort to those who have to watch a cabinet of under-educated rich people take an axe to, say, arts funding and Planned Parenthood.

How does a Trump end up in the Oval Office?

According to a recent Oxfam study, the richest one per cent of humans own more wealth than the rest of the planet.

You would think the dispossessed would be looking warily at a narcissistic billionaire who, as president, refuses to divest himself of his personal business interests.

But no: Almost as many people who recoil from him, love him, because at the end of the day, Americans still worship power, celebrity and wealth.

Trump paints himself as an outsider to the rotten politics of Washington, a change maker, a guy who shares your contempt and resentment of oligarchy.

We have some of the same problems in India, where we are today led by anti-intellectual, misogynist, Hindu chauvinists and ultra-nationalists, and equally hobbled by our fetishisation of power, social and caste status, celebrity and wealth.

It makes sense that we elected a man who does not come from a privileged background, and promises increased prosperity and an end to the corruption that has hollowed this country out.

He does have very rich friends, but Narendra Modi, too, is an outsider to the discredited politics of Delhi, a man projecting himself as a change maker who shares your contempt and resentment of oligarchy.

But while that makes sense in a country understandably sick of institutionalised corruption and ostentatious sycophancy, Mr Modi's election has also revealed a country more majoritarian-minded than ever before, empowering those who see the Constitution as an inconvenience.

Assuming that we believe our wallets are fuller -- according to the Oxfam study, 57 individuals own the same amount of wealth as the bottom 70 per cent of the population -- we seem much less interested than we should be in holding power to account.

It behoves us in India to watch how the US is pushing back.

It's a lesson in rising to the defence of Constitutional values when the administration won't.

The pro-Modi argument, that a person who won a large electoral mandate should 'be respected', that is, not challenged, is as popular as it is nuts: It is exactly when great power is accorded that great watchfulness is needed.

We have come to the point, on this planet, where large sections of people see the well educated, the reasonable, and the inclusive, as a snotty, out of touch enemy that breeds and dominates a nebulous 'system' that works exclusively for itself.

To the extent that liberals have a hard time understanding other ways of being, it is.

But the idea that you have to be privileged and rich to worry about the environment and the arts and gay rights and minorities and human rights, is utter nonsense.

It's one thing to say that everyone should have access to a good education and the chance to stand with pluralism or agnosticism or universal human rights.

But to say that those things are irrelevant, or a luxury, or out of touch, is the same as declaring oneself to be, at best, uninvested in one's country, and at worst, outright racist, misogynistic, bigoted, chauvinistic, and casteist.

Understanding where someone comes from is not the same as agreeing with where they are going.

To say this is not to be out of touch. It is to call something out that needs calling out.