News
Business
Movies
Sports
Cricket
Get Ahead
Money Tips
Shopping
Sign in  |  Create a Rediffmail account
Rediff.com  » News » Do we live in a wireless world?

Do we live in a wireless world?

'Modern living has added another dimension to interiors that design magazines airbrush away.'
'Almost everywhere one looks are ugly phone chargers jutting out of electric sockets to power mobile handsets, of which everyone seems to have more than one,' says Kishore Singh.
Illustration: Uttam Ghosh/Rediff.com 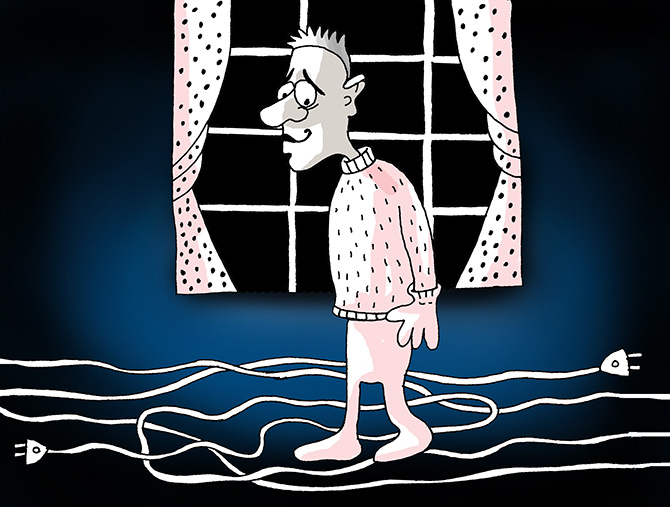 Panicked by the pollution in Delhi, my son searched online and ordered giant-sized air purifiers for all the rooms in the house.

And so we joined thousands of Dilliwallahs obsessively monitoring the status of air quality inside the house.

Whenever she was not on the phone, my wife kept a sharp eye out to check whether the light on the machines was red or orange -- it was so rarely blue -- often also calling the office to provide us updates on the 'moderate' quality in one room while it remained 'very poor' in another.

But whether they were scrubbing the air clean or not, the air purifiers posed quite another danger to our health by way of loose wires trailing through the rooms, laying traps for the unsuspecting in the most unlikely places.

Next, my daughter, who feels very cold, ordered the heaters to be taken out of storage and plugged in wherever she could find an electric source, leaving still more snaking wires on the floors.

dd to this her plethora of electric heating appliances -- bags, kettles and hand-warmers -- and there was a veritable tangle of cords to snare the unwary.

I tripped often, as I suspect did others, but so far major injury has been avoided, though it's a calamity waiting to happen.

At some stage of renovation, I had decided to rid our living spaces of wall lights, opting instead for uplighters and table lamps.

All wall sockets were employed for the purpose, leading us to engage an electrician to add additional points for the latest incumbents -- the purifiers and heaters to which one might add other distractions by way of music synthesisers, amplifiers and giant TV screens, without which, apparently, no living space is complete -- all wanting an electrical connection, or two, or twenty.

But modern living has added another dimension to interiors that design magazines airbrush away.

Almost everywhere one looks are ugly phone chargers jutting out of electric sockets to power mobile handsets, of which everyone seems to have more than one.

Though everyone from the gardener and driver to the help seemed to charge their phones in our house, it wasn't so much on account of the free electricity, as my wife remonstrated with them, as the need to juice up following their WhatsApp downloads.

Add to this the chaos of Internet modems and routers and you have some idea of the jamboree of wires and cords infesting our home.

With everyone constantly deployed on laptops and iPads, there are still more charger and adaptor wires on the loose till it's different to tell one apart from the other.

As if the threat of injury by tripping were not enough, what amazes me is why, with all the technology and hardware at one's disposal, I can still not charge my phone because every new charger disappears into some black hole where wires apparently go to hide.

Nobody's phone charger at home matches anyone else's, nor do our laptop chargers. When I am finally able to locate a charger to fit, the overloading of sockets causes the fuse to trip, leading to battles over who has charging dibs over another.

When, at night, we are left to combat whether our priority is clean air or warm -- my daughter preferring the heater while my son opts to prove his point with purifiers -- my wife and I find ourselves isolated in the skirmish and left, literally, in the cold.

Did somebody say we live in a wireless world? 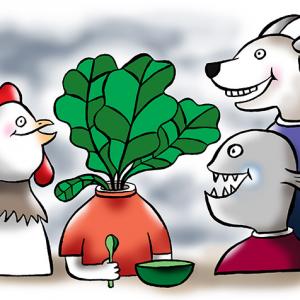