If either faction of the AIADMK failed to muster a floor majority, then the governor would be called upon to ask MK Stalin as the leader of the opposition if he would like to try his hand at government formation.

Indications are that the DMK would not fall for any such situation straightaway. However, internal discussions and debates could be triggered by what is happening outside than inside, says N Sathiya Moorthy. 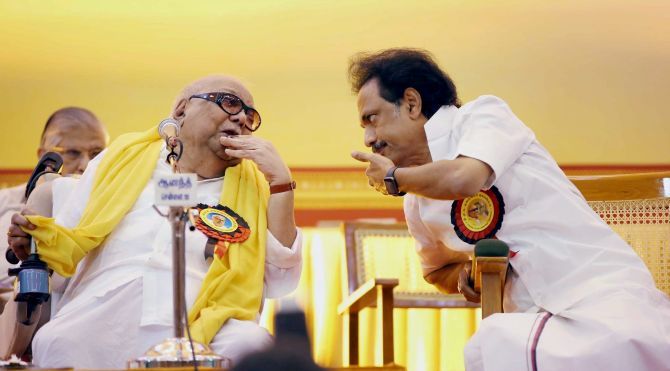 Though the ‘ruling’ All India Anna Dravida Munnetra Kazhagam faction’s jailed leader V K Sasikala Natarajan may have blamed the Opposition DMK in Tamil Nadu for the O Panneerselvam-led revolt, it’s the DMK’s considered decision on government formation that may have come as a saving grace to her camp.

Acting Governor Ch Vidyasagar Rao has invited the Sasi camp’s new ‘CM-elect’ Edappady K Palanisamy for a meeting on Thursday forenoon, as a follow-up to the one he has had on Wednesday night, and also with OPS.

Indications are that the governor seems convinced that between the two, Palanisamy is better- placed to prove a floor majority. Rather, OPS, given that he has less than 10 members’ proven support out of 134 party MLAs in a 234-seat assembly, may be less likely to muster the numbers that Palanisamy claims he already has.

Palanisamy has also reportedly demonstrated it with a signed memorandum, as did Sasikala before the Supreme Court sentenced her to prison in the ‘Jaya wealth case’ on Tuesday.

With Sasikala conviction, and Governor Rao's confusion about inviting one of the AIADMK faction leaders to form the government, the DMK is suddenly getting into increasing focus, in terms of legislative strength and the possibility of staking claims to forming a government, if it came to that.

The Indian Union Muslim League, an electoral ally of the DMK, has one member, though within the AIADMK camp there are allies who have contested under the party’s ‘Two Leaves’ symbol and would be counted as such under the ‘anti-defection law’ if that became an issue.

A vacancy exists in the AIADMK camp following the demise of Chief Minister Jayalalithaa, which has been the cause for the current political troubles in and for the party.

Nearly 48 hours after the Supreme Court poured cold water on party general secretary Sasikala’s chief ministerial ambitions, and after her faction had chosen ‘outgoing’ minister Palanisamy in her place, the rival OPS camp is yet to show up numbers that can impress acting Governor Ch Vidyasagar Rao to justify inviting the latter to form government and prove his majority in a floor test.

Despite the post-verdict OPS’s call that ‘now is the time for all good men to come to the aid of the party’, the response has been tardy at best, poor in actuality.

Only Deepa, Jayalalithaa’s niece who had hoped to strike on her own with a political declaration on her aunt’s birth anniversary on February 24, sided with OPS in his second appearance at the leader’s samadhi on the Marina on Tuesday night.

Other than prefixing her name with the initial ‘J’ common to her father Jayakumar and his sister Jayalalithaa, but more to resonate latter in the changed circumstances, Deepa has no MLAs to offer the OPS camp.

If anything, Deepa is not even a member of the AIADMK, until the OPS camp actually captures the organisational wing and then admits her into the party.

Yet, in terms of numbers, the state may be moving closely to a ‘denial mode’, with rival AIADMK factions focussing more on not letting the other win a trust-vote given a chance than possibly winning it for itself.

The OPS faction is more likely to hope for it just now before consolidating to fight for a trust-vote win. The Sasi camp has the advantage on both fronts, at least as of now.

For the OPS camp in particular, reaching the day’s ‘magic figure’ of 18 seems relatively easier, if at all, than the real magic figure of 118. Hence also the possibility of Governor Rao considering Palanisamy's claim.

A lot will however depend on when and how Governor Rao arrives at a decision on the choice of next CM and trust-vote, or if he would still consider a ‘common floor test’, as is being freely talked about in some circles despite the SC direction of the kind in UP’s ‘Jagadambiga Pal case’ (1998) not being applicable to the present TN situation, with no CM to be called to prove his majority in the House.

Theoretically, by abstaining from a vote, the DMK and the Congress could throw up legal questions about the possibility of the required numbers, but that is not taking anyone anywhere after that vote.

Anticipating a small shortage as though, the Sasi camp has been wooing state Congress president S Thirunavukkarasar, politically a much-travelled man who had begun his ministerial career in the AIADMK under MGR and had propped up Jaya in the post-MGR era before being thrown out from the party.

Thirunavukkarasar floated separate parties more than once, returned to the parent fold at least once, then moved on to the BJP, where he was a Rajya Sabha member from Madhya Pradesh, before settling down in the Congress and as TNCC president just now.

But unless the Sasi camp within the AIADMK legislature party is near-completely wiped out, the OPS faction would require external support from the DMK, and nothing less can save them the day.

Anticipating a situation such as this, DMK’s veteran general secretary K Anbazhagan, the originator of the SC order transferring the Jaya wealth case to a Karnataka court years ago, and the party’s executive president, M K Stalin, rather mutedly, have clarified that they would not support either of the AIADMK factions to form a government.

The chances are that the DMK might (have to) stick to this position, if the situation worsened for the AIADMK factions than it is already.

It is also not unlikely that the DMK then would consider the need for talking to the Congress high command, to make the state unit fall in line in the larger interest of future alliances and coalitions, if it came to that.

However, the state Congress is tempted by the possibility of a coalition government, if it could help it, and also citing the common anti-BJP stand against Prime Minister Narendra Modi’s leadership, where the Sasi camp is also seen as moving towards.

If, however, either faction of the AIADMK failed to muster a floor majority, then the governor would be called upon to ask Stalin as the leader of the opposition in the state assembly if he would like to try his hand at government formation.

With the Congress and IUML members on its side, the DMK would have only 98 MLAs, and require a minimum of 20 more to form a government, a possibility ailing party chief M Karunanidhi promptly spoke about only days after the assembly polls of May 2016, which Jaya won it for a sixth term as CM, beating his own five-time record.

Indications are that the DMK would not fall for any such situation straightaway. However, internal discussions and debates could be triggered by what is happening outside than inside.

A section of the DMK view is that it should not be trapped into a situation of either the tail wagging the dog, or the reverse, as AIADMK faction legislators in the party’s company could cause avoidable risks in the DMK down the line.

It’s the kind of possibility that Stalin could not afford just now, while still consolidating his own hold over the party after father Karunanidhi’s irretrievable health condition.

At the same time, there is also the argument for the party trying to form a government, with minimum outside support. Again, there are multiple arguments.

In terms of sentiments, it would mean that Stalin would have become CM for the first time after being projected for the post as far back as 2001 elections, so to say.

Two, for many of the party and ministerial veterans in the DMK, this may be their last term in the assembly, with their age and health coming in the way beyond 2021, when alone the next round of assembly polls might be due.

It would also mean that the DMK would have enough experienced ministers around to train the newcomers, who failed the party in Jaya’s monumental electoral defeat of 1996, when as chief minister Karunanidhi was seen as doing most of their jobs.

On the reverse side, it is argued that by heading a ‘coalition government’ with AIADMK rebel support and possible participation, Stalin would have broken the ‘Dravidian political record’ of non-coalition formations in the state administration.

As is being recalled, through his five years in office as ‘minority CM’ (2006-11), as Jaya would taunt him, Karunanidhi survived with the ‘outside support’ of the Congress ally in the UPA at the Centre but without providing any ‘loophole’ for a national party to re-enter the state through the ‘backdoor’ in a big way after the Congress had lost the historic 1967 elections.

If anything, this group also points out that even without forming a government or supporting another, from within or outside, the DMK still stood to win any advanced elections to the state assembly, if one became inevitable.

There are even suggestions that the DMK should dump the Congress ally, or drive a hard bargain at seat-sharing, if the rival AIADMK is split, what with J Deepa expected to rope in some of the non-mainstream caste vote-banks of the AIADMK to the OPS camp, thus weakening both factions, equally.

It’s also this that the state Congress leadership seems pointing to the high command while seeking to take the party closer to the Sasi camp than cadres, commoners and even a section of the high command would desire.

For now, however, the ball continues to be in the governor’s court as far as addressing the faction-feuds of the AIADMK, but from a purely constitutional position and responsibility.

Already, opinions are emerging that the governor should ensure the return of the Sasi camp MLAs, purportedly ‘locked up’ in suburban Koovathur resort, to their respective constituencies, for cadre and voter-level consultations, before they can be called upon to commit their positions one way or the other.

But that also would not mean that allegations of coercion, intimidation and lure would not surface again. 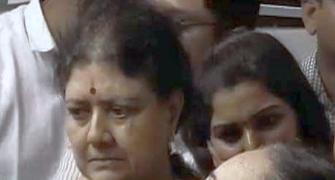 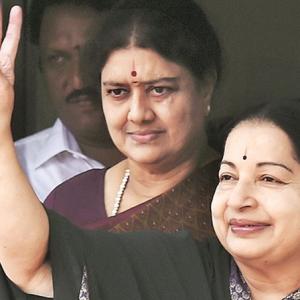 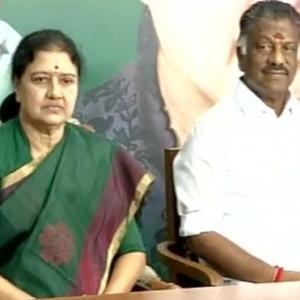