'Such a serious threat -- to assassinate the prime minister of India, no less -- was not handed over to the Maharashtra Anti Terrorist Squad for investigation, but to the Pune crime branch.'
'So much for seriousness in tackling such a grave issue,' says N Suresh. 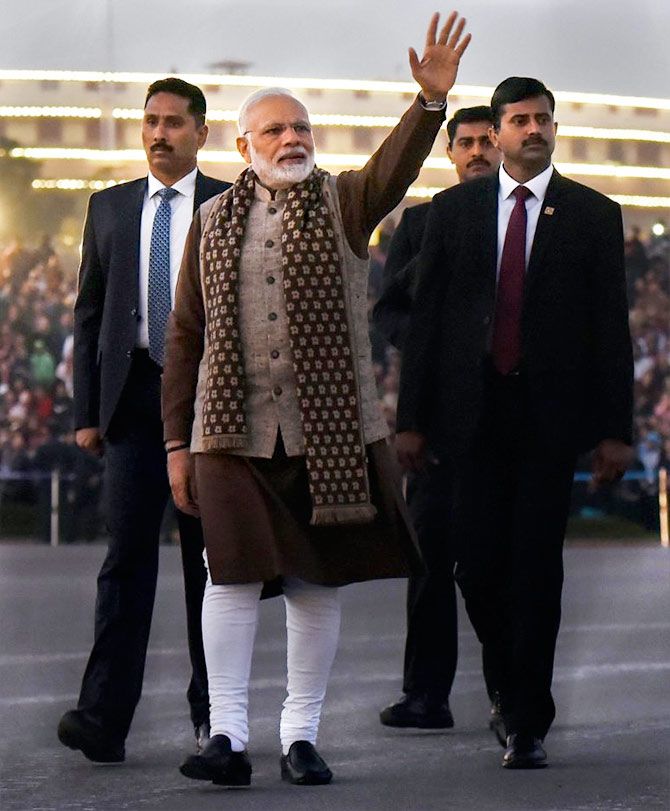 So in the first of its kind political humour we have encountered in a long time, an e-mail is produced that is addressed to media organisations stating how they -- all 'Naxals' -- want to threaten Prime Minister Narendra D Modi with assassination 'Rajiv Gandhi style', an e-mail which was also copied to the police!

The authorities in Maharashtra quickly pounced on five people -- including a lawyer, professor and editor -- who are directly connected with the Dalit cause. This is, after all, a Bharatiya Janata Party government.

Apart from these five individuals, the e-mail named activists who had been arrested by the Maharashtra police during the previous Congress-Nationalist Congress Party government.

It's no surprise that we are being served old wine in new bottle.

The only difference being this government has coined a new term: 'Urban Maoists', thereby upgrading the 'Naxals' by a few notches in nomenclature.

Worse, such a serious threat -- to assassinate the prime minister of India, no less -- was not handed over to the Maharashtra Anti Terrorist Squad for investigation, but to the Pune crime branch.

So much for seriousness in tackling such a grave issue.

The episode reeks of a conspiracy against the Dalit cause, leading one to believe that the Bhima-Koregaon riots issue raised by the community has boomeranged on them.

Just see the way the Maharashtra home department, which reports to Chief Minister Devendra Fadnavis, failed to uphold law and order by not carrying out preventive arrests prior to the January riots in which Sambhaji Bhide and Milind Ekbote were named as prime accused.

To strengthen the conspiracy angle, the prime witness in the riots case died soon after.

While Bhide was never arrested, Ekbote was taken into custody for a few days and released on bail.

The crusaders in the case have been termed 'Urban Maoists' -- the riots case has been forgotten.

Some Dalit intellectuals and activists fear that evidence gathered in the Bhima-Koregaon riots case could disappear before the trial begins.

In 2007, the Chhattisgarh government arrested Dr Binayak Sen, a paediatrician, public health specialist and vice president of the People's Union for Civil Liberties, accusing him and activists Arun Ferreira and Vernon Gonsalves of being Naxalites working against the government.

The BJP has now gone further, alleging the alleged 'Urban Maoists' had admitted to hatching a conspiracy against the prime ministers.

I feel it's a comedy of errors and here's why I think so.

Activists who work in tribal areas don't have modern gadgets or mobile phones. According to the police, that is because those working in the so-called Naxal areas do not want to reveal their location.

Secondly, Digital India is all very well, but the Internet connection in remote forest areas is either very weak or nonexistent, so it is impossible to use these communication devices in those parts of India.

Let alone cell phone towers and fibre optic cables, to suggest that they are communicating with each other via e-mail from these areas is a travesty of fact.

Despite criticising the Congress for ignoring remote areas during its rule, it is obvious that the BJP too has failed these Indians. Which is why fringe elements get away after indulging in violence like what occurred after the rally in Bhima-Koregaon on December 31, 2017.

The tragedy though is that of Dalits, a scattered mass with a more scattered leadership which cannot remain united and cohesive.

As a result, not one person has stood up to the Maharashtra government's muscling in on them.