After 2004 not only was there no such recommendation, but all mention of the Palmolein Case was wiped off Thomas's bio-data.

There seems to have been a deliberate attempt to clear Thomas's record starting in 2004. The Manmohan Singh ministry took office in 2004. Draw your own inferences, says T V R Shenoy.

Marx was wrong. In the UPA's Wonderland history repeats itself first as farce and then as tragedy.

The tragedy is the damage to the reputations of P J Thomas (somewhat unwittingly) and of Dr Manmohan Singh (seemingly all too wittingly). But we must go farther back in time for the farce.

Four years ago the prime minister and the home minister met the then leader of the Opposition to discuss who should succeed P Shankar as the Central Vigilance Commissioner. Dr Manmohan Singh was bent on a particular name -- let us call him 'X' -- about whom L K Advani held strong reservations.

With no meeting of minds in sight, the latter said the prime minister might do as he wished, but he wanted his dissent recorded.

It sounds like a foreshadowing of what happened in 2010, doesn't it? But the home minister of the day was the relatively easygoing Shivraj Patil, and he told Dr Singh that the committee might consider other names given L K Advani's objections to 'X'. A curious episode then took place.

Dr Singh asked if he might bring in Prithviraj Chavan, then the minister of state for personnel, who was in a nearby room. To this, Advani answered that the prime minister might do as he wished.

Chavan then entered, to make the same speech about 'X' being a very good man and so forth. None of this cut any ice with the then Leader of the Opposition who had just heard the same words off the prime minister's tongue. Ultimately, 'X' was rejected in favour of Pratyush Sinha.

There was no fallout from this comic interlude, but many people recall it today. Was Prithviraj Chavan called in only because Dr Singh wanted a witness that he had stood his ground while Shivraj Patil wavered?

Bearing that intriguing thought in mind let us proceed to the present day.

A few points need to be made. First, let us applaud the judicial restraint. Their lordships did not explicitly embarrass the Manmohan Singh ministry, they merely laid out the facts.

The judgment also says: 'We have perused the files submitted by the learned Attorney General for India. From the said files we find that there are at least six notings of DoPT between 26th June, 2000 and 2nd November, 2004 which recommended initiation of penalty proceedings against Shri P J Thomas and yet in the clearance given by CVC on 6th October, 2008 and in the Brief prepared by DoPT dated 1st September, 2010 and placed before HPC (the high powered committee) there is no reference to the earlier notings of the then DoPT and nor any reason has been given as to why CVC had changed its views while granting vigilance clearance on 6th October, 2008.'

The Supreme Court did not spell it out, but you can follow the sequence from the dates. Between 2000 and 2004 there were six recommendations to start proceedings against P J Thomas. After 2004 not only was there no such recommendation, but all mention of the Palmolein Case was wiped off P J Thomas's bio-data.

There seems to have been a deliberate attempt to clear P J Thomas's record starting in 2004. The Manmohan Singh ministry took office in 2004. Draw your own inferences.

Pratyush Sinha, the former Central Vigilance Commissioner, says he was unaware of the charges against P J Thomas when he cleared his name as chief secretary in Kerala. That clearance was the foundation of the defence mounted by the Manmohan Singh ministry to justify P J Thomas's appointment.

But what utility does that green signal have if it was made on the basis of a doctored document, one wiped clean of references to a specific charge against P J Thomas?

Anyone who is at all familiar with the workings of the Government of India knows that this is unlikely to have happened without the knowledge of the Cabinet Secretary. He may not have approved of it, but it is farfetched to say that he knew nothing about it.

The Cabinet Secretary is the head of the entire IAS cadre. It is beyond belief that he was in the dark in such a matter concerning another IAS officer of such seniority.

Second, the Department of Personnel prepared the panel of names that was put to the high-powered committee. Who, precisely, was responsible for the whitewashed bio-data, a process that the Supreme Court has now demonstrated goes back to 2004?

The Union minister for fertilisers and chemicals is M K Alagiri. Effectively, all three names on the list had been blessed by DMK ministers (this column was written before the DMK ministers resigned).

The prime minister has accepted responsibility after the Supreme& Court verdict. He also said there was no coalition pressure in the decision to appoint P J Thomas. Call it cynicism, but these days when a politician says one thing one immediately suspects that the opposite is true!

Whether or not coalition partners took a call, the prime minister cannot evade his role. Let us not forget that the department of personnel is Dr Singh's responsibility. It is up to him to tell us who -- specific names, please! -- was responsible for the doctored documents placed before the high-powered committee.

The prime minister cannot plead innocence. Even if Dr Singh had been misled by the censored bio-data -- prepared by a department directly under him -- he was aware of the charges against P J Thomas because the current Leader of the Opposition in the Lok Sabha, Sushma Swaraj, told him so in plain words.

One might, even in all this mess, still feel a bit sorry for P J Thomas. Let us not forget that the Comrade Achuthanandan that thundered about the Palmolein Scandal is also the Kerala Chief Minister Achuthanandan that cheerfully made the selfsame P J Thomas the state chief secretary.

But can you feel sorry for Dr Singh? J M Lyngdoh, the former chief election commissioner, was one of those that challenged P J Thomas's appointment in the Supreme Court. After the verdict he put it bluntly, 'It is not an indictment of Thomas, it is an indictment of the prime minister and the home minister.'

Mr Lyngdoh is correct. At that now infamous meeting both Dr Singh and P Chidambaram refused to consider anyone but P J Thomas.

Pepsi's entry into India was one of the highlights of the era of liberalisation that began when Dr Singh was finance minister and P Chidambaram the commerce minister. To twist the Pepsi slogan of those days, the Congressmen walked into that meeting to select the central vigilance commissioner chanting 'Yeh hi hai right choice, Sushma-ji!' 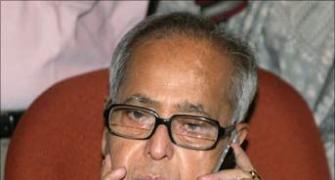 DMK rules out reconsidering its decision 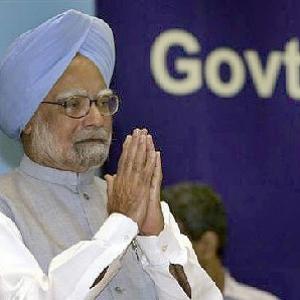 I accept my responsibility: PM on CVC's appointment

The United Colours of the tainted UPA