News
Business
Movies
Sports
Cricket
Get Ahead
Money Tips
Shopping
Sign in  |  Create a Rediffmail account
Rediff.com  » News » India is no longer the elephant in the room

India is no longer the elephant in the room

The world is convinced that the emergence of India on the global scene is largely beneficial as India plays by the rules.

Bilateral relationships with India are now the building blocks of global governance, says T P Sreenivasan in his assessment of Indian foreign policy in 2010.

At the end of the first decade of the new millennium, Indian foreign policy has clear objectives. These are not vague or ideological. India pursues them with dogged determination. Had it not been for multiple scams and signs of emerging political instability, India could have accomplished much more in 2010.

The significance of 2010 was not that the leaders of the Permanent 5 and others visited India in one year. India never had any dearth of visitors, particularly in the salubrious winter months in Delhi. Our hospitality and accessibility are legendary.

Perhaps the largest number of important foreign visitors came to India when sweeping changes took place in Delhi in 1977, 1980 and in 1998. There was always curiosity about Indian openness, just as there was curiosity about the Chinese enigma. But the visits in 2010 were not exploratory. They came to do business, to firm up long term relationships, to give and take. The balance sheet, in the end, was in favour of India.

India is no more the 'elephant in the room' in multilateral negotiations. Nor are we the peace makers or honest brokers anymore. We are the builders of coalitions, not in pursuit of some vague idealistic goals, but with clear political and economic objectives.

India now has a clear agenda and the world is willing to go more than half way to meet it. The world is convinced that the emergence of India on the global scene is largely beneficial as India plays by the rules. Bilateral relationships with India are now the building blocks of global governance.

Combating terrorism is not a new priority for India. But it was never the touchstone of our bilateral relationships as it has become today. We have blown hot and cold even with Pakistan on this issue and tolerance of terrorism was no sin for our friends if they saw it as an instrument of freedom fighters. For fear of our anti-terrorist policy being construed as anti-Pakistan, we set the conclusion of a comprehensive convention against terrorism as our goal, which has eluded us even in the aftermath of 9/11.

Today, a country's position and policies towards Pakistan's trade in terrorism is a major factor in our bilateral relations. For this reason, the UK and Russia gained, the US and France won points and China failed in Indian eyes.

Nuclear policy is determined today not just by pursuit of disarmament, but by the need for energy. The NPT may be taboo and the CTBT may be problematic still, but the FMCT is not untouchable. Nuclear cooperation is paramount in our calculations and that explains why it was possible to conclude the reprocessing agreement with the US and to sign the Vienna Convention of Supplementary Compensation for Nuclear Damage.

India was also able to overcome the objections to the purchase of the French Evolutionary Power Reactors. Non-proliferation is part of our global agenda today and we are willing to be part of the NSG and MTCR. We are willing to consider even other arrangements relating to chemicals and conventional weapons if these bodies enhance fruitful cooperation.

We object to China building nuclear reactors in Pakistan and Iran experimenting with explosion technology because of the risk of proliferation in our neighbourhood. We have no quarrel with either country developing nuclear energy for peaceful purposes.

Pragmatism and clarity of purpose are visible in trade and environment also, though the path to be pursued appears confusing. We have begun to look at our own protective tendencies in return for major concessions from the rest of the industrial world. Even at the risk of diluting the principle of 'common, but differentiated responsibility' and the concept of per capita emissions, we have moved from no binding commitments to voluntary commitments on reduction of greenhouse gases, subject to international monitoring and verification.

The nation has not accepted the new approach, but these are issues in which we are more than willing to tango with the Chinese. India has matured enough to find our causes and our allies in different fields.

The pursuit of permanent membership of the UN Security Council is another clearly stated objective that has emerged in 2010. It may not be attainable in the near future, the sacrifices we have to make to pursue it may be too big and even its value as an objective may be called into question. But at no time had this objective been clearer since we first mooted the expansion in 1979.

India knows well that individual commitments to India without a universally acceptable formula are meaningless. But we expect that the contours of such a formula will emerge sooner than later and we should not be wanting in support at that time. France, the UK, Russia and the US, perhaps in that order of warmth, acceded to the wishes of India and even China could not remain altogether silent.

The objective of entering the Security Council, even without a veto is clear. What is not clear is the value of being there, except as an acceptance of our political status, commensurate with our economic growth. The G-20 is an accomplished fact, which has whetted our appetite for a larger horse-shoe table at the United Nations.

In 2010, India demonstrated that it is possible to secure political concessions from others for economic deals, even when such deals are mutually beneficial. In the old days, Santa Claus came with a bag full of gifts, but went back empty handed. But in 2010, his bag was more than full on his return journey too.

Each one of our visitors had something to show to his people as the gains from India. Except for China, they made gestures of various kinds in return in areas of our priority -- anti-terrorism, energy, environment, trade and a role in global governance.

Such gains at the global level have not been forthcoming in the past. India demanded reciprocity and equity on issues ranging from diplomatic immunity to Jammu and Kashmir, without being brow beaten by more powerful nations.

We seem to have succeeded in insulating foreign policy from chaos at home. One telling example was delaying the firing of the Maharashtra chief minister till Air Force One was clearly out of sight. India may have lost heavily in the Commonwealth Games, but the foreign athletes went back fairly happy. The communications network survived the 2 G spectrum scandal.

The world has not lost faith in our democracy even after an entire Parliament session was wasted. The steady course of our foreign policy may well have helped us survive 2010.

T P Sreenivasan is a former ambassador of India to the United Nations, Vienna, and a former Governor for India at the International Atomic Energy Agency, Vienna. For more articles by Ambassador Sreenivasan, please click here 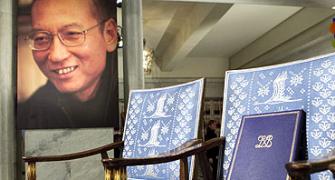 India more assertive with China, but not enough
Wikileaks: Caught in the Midnight Sun

Let us grow up!