The lessons from the Ishrat Jehan episode should be about providing a remedy in the process of law enforcement so fake encounters are prevented, and to remedy the process of justice so that officers of law are held accountable for illegal actions, says Shashi Shekhar.

Two Muslims were killed on July 31, 2006 in a major city. Following public outrage a month later a case of fake encounter killing was registered. Four years later on July 13, 2010 a court in that major city found three Hindu policemen guilty of having carried a fake encounter killing. It is a different matter that the killing of two Muslims by three Hindus resulted in no communal outrage on national television. Neither the police department was blamed of being communally polarised nor was the government in power or the party in power questioned for how such an outrage could have occurred under their watch.

Timarpur is not too far from Delhi University, a hotbed of Left Liberal activism. Timarpur is also one of the largest of seven constituencies of North Delhi. That very same Delhi where a Congress-led Sheila Dixit government has been in power for over a decade. But, of course, that very same Delhi whose police department is the responsibility of the Congress-led UPA government with Manmohan Singh as prime minister, P Chidambaram as home minister both occupying office at the pleasure of Congress President Sonia Gandhi and the heir apparent Rahul Gandhi.

On July 13, 2010 a Delhi court convicted three Delhi policemen Ashok Kumar, Sudesh Rana and Suraj Pal for the killing of Zulfikar and Nazakat in a fake encounter near Timarpur. The case of fake encounter perpetrated on Zulfkikar and Nazakar was not politicised and rightly so. Justice was delivered in a timely manner without prejudicing the judicial process and commendably so. The story barely registered a blip even on the radar of Delhi's otherwise hyperventilating media despite the obvious template of communal victimhood and rightly so as well.

It is an undeniable fact that the two fake encounter cases in Gujarat of Sohrabuddin Sheikh and Ishrat Jehan have resulted in disproportionate media coverage and politically prejudiced commentary. To put this lack of proportion into perspective one has to just peruse data published by the National Human Rights Commission. As an example back in 2004-2005 the NHRC had the following to say:

'As regards the deaths which occurred in the police custody in the course of the year 2004-2005, the report indicated that there was a noticeable decline in such cases vis-a-vis the previous year in the states of Bihar, Gujarat, Maharashtra, Uttar Pradesh, Assam, Rajasthan, Tamil Nadu and West Bengal. There was, however, an increase in the deaths in police custody in the states of Andhra Pradesh, Karnataka, Kerala, Orissa, Delhi, Jharkhand and Uttranchal.'

Specifically on encounters the NHRC had the following to say:

Fast forward to 2010 and India Today on July 18 carries a detailed story on overall statistics from 1993 to 2009 that reveals that Uttar Pradesh, Bihar, Maharashtra, Andhra Pradesh as the top three states with the maximum number of fake encounter complaints. With 716 cases in Uttar Pradesh, 79 in Bihar and Congress-ruled Maharashtra and Andhra with 73 and 61 cases respectively. In fact from 2006 Uttar Pradesh according to NHRC figures quoted in this report lead in the number of fake encounter cases every year.

Without getting into the criminality of Ishrat Jehan's alleged terror links, there can be no two opinions that she was entitled to due judicial process as perhaps were the innumerable faceless and nameless dead in fake encounter killings. It is commendable that the process of justice in Gujarat has uncovered the truth to make a beginning in bringing to book those responsible.

It would be a shame for both Ishrat Jehan's family and the activists who claimed to be outraged by fake encounter killings to make a political statement of this process. Their deep sense of victimhood is understandable; their political outrage however is misplaced and outright wrong.

To make the Ishrat Jehan case about Narendra Modi is an insult to the memory of the innumerable dead and a mockery of the suffering of their next of kin to whom justice on account of fake encounters and deaths in custody remains a far cry. 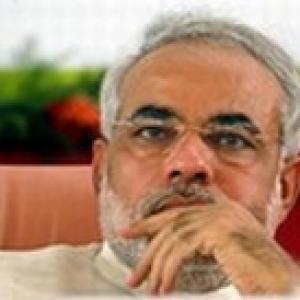