'If the Chinese intent is to be gauged based on its aggression in the South China Sea, greater forays in the Indian Ocean, a hawk's attitude towards Taiwan, flying its fighters repeatedly over the Senkaku islands in the East China Sea and creating strategic assets globally, there would be a requirement for strategic partnerships for India,' says Brigadier S K Chatterji (retd). 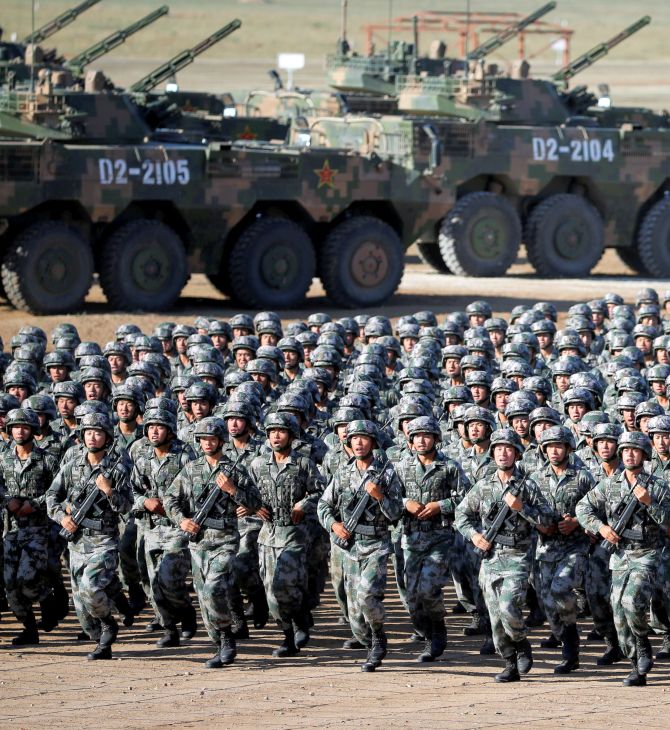 The close to three million strong Chinese armed forces have been allotted their annual budget for 2018.

The 1.1 trillion yuan budget, equivalent to $175 billion, provides for an increase of 8.1% over and above its allocation of the previous annual budget.

The Pentagon request for its 2019 budget amounts to $686 billion.

The Indian defence budget for the current fiscal year is $46 billion.

The relative lack of transparency in allocation of China's defence budget has always drawn adverse comment. It has been no different this year.

'We would like to see China be more transparent about its defence policy,' Japanese chief cabinet secretary Yoshihide Suga remarked, 'including spending and the direction of its military power,'

'China should take international concerns seriously,' the Taiwanese China policy making council noted, 'increase its defence budget's transparency and give up its targeted military deployment towards Taiwan in order to avoid an escalation of regional tension.'

As far as the transparency of the Chinese defence budget is concerned, expenditure that it does not traditionally include allocations for development projects of space programes for military use, provincial military base maintenance costs, revenues from the People's Liberation Army's business enterprises etc.

Such major projects as the base at Djibouti and the $60 billion China Pakistan Economic Corridor to include the Gwadar port that has a huge impact on Chinese military capability, surely isn't a part of the 1.1 trillion budget announced.

There is no laid down internationally accepted format for reporting defence allocations by governments. However, the need for transparency in democratic societies calls for far greater detail in reporting allocations and expenditure for major committal of funds under any head by governments.

Such practices allow any international agency to extract information provided by the government, and congregate as per the modules of the agency concerned to arrive at defence allocations.

In terms of GDP, the Chinese defence budget hovers around 2% of its GDP.

'China's defence budget in terms of GDP and per capita expenditure is lower than other major countries in the world,' noted Zhang Yesui, spokesman for the first session of the 13th National People's Congress.

With the Chinese economy having bounded ahead at double digits for a sustained period, the overall expenditure on defence in China as part of total government expenditure has come down.

China's major current strategic priorities include the Taiwan Straits, the South China Sea, firming up in the Indian Ocean, and technological progress.

With its current allocations for defence, the Chinese will have to bide their time to match the Americans. However, technological breakthroughs in a host of areas of military applications could well be the decider.

The Chinese defence budget increases have not yet fuelled a discernible arms race in South Asia or Southeast Asia.

Among the countries more affected are India, Vietnam, the Philippines, Japan and Taiwan.

With the Belt and Road Initiative, cash-rich China is obviously attempting a larger strategic sphere of influence with economic aid and investments spearheading political objectives.

It has been on a buying/leasing/developing spree as far as ports are concerned. Obviously, such activities do not require to be funded from the defence budget, notwithstanding their pronounced impact on defence capabilities.

With the Chinese economy expected to be bigger than the US' before 2030, Chinese defence expenditure will headed in a similar direction.

Its massive military modernisation programme is expected to lead the Chinese forces to transform the PLA -- as China's supreme leader Xi Jinping vowed at the last Communist party congress -- into 'a world class organisation by 2050.'

It boils down to the PLA being the most powerful global force. That estimate doesn't seem to be unrealistic either. What will matter is how Chinese intent manifests itself at that stage.

Lieutenant General He Lei, deputy head of the PLA's academy of military sciences, would have us believe, 'Whether a country is a threat to others or not is not determined by its national strength and armed forces, but by the policy it adopts.'

'Whether a country should be worried or not depends in part on how China plans to spend the 7% increase,' notes William Sharp, the Honolulu-based author of Random Views of Asia from the Mid-Pacific.

Obviously, a nation's intent is the paramount factor.

If the Chinese intent is to be gauged based on visible signals and stated objectives, its aggression in the South China Sea, greater forays in the Indian Ocean, a hawk's attitude towards Taiwan, flying its fighters repeatedly over the Senkaku islands in the East China Sea and creating strategic assets globally, there would be a requirement for strategic partnerships for India and even America to counter-balance. 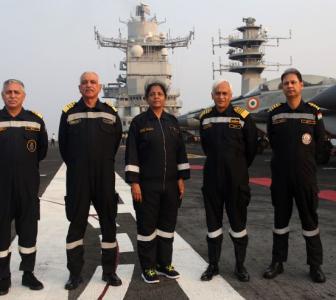 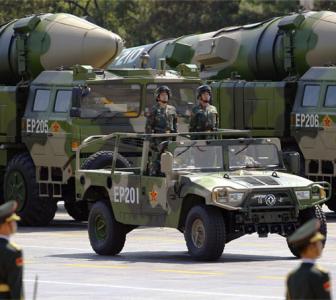 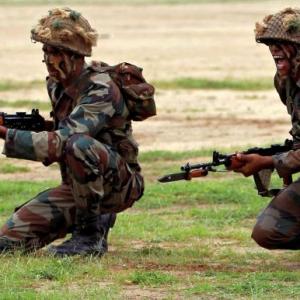