'When Modi was having his maiden meeting with Donald Trump, China is up to its old tricks again, by causing a distraction on the Doklam plateau,' says B S Raghavan, the distinguished civil servant. 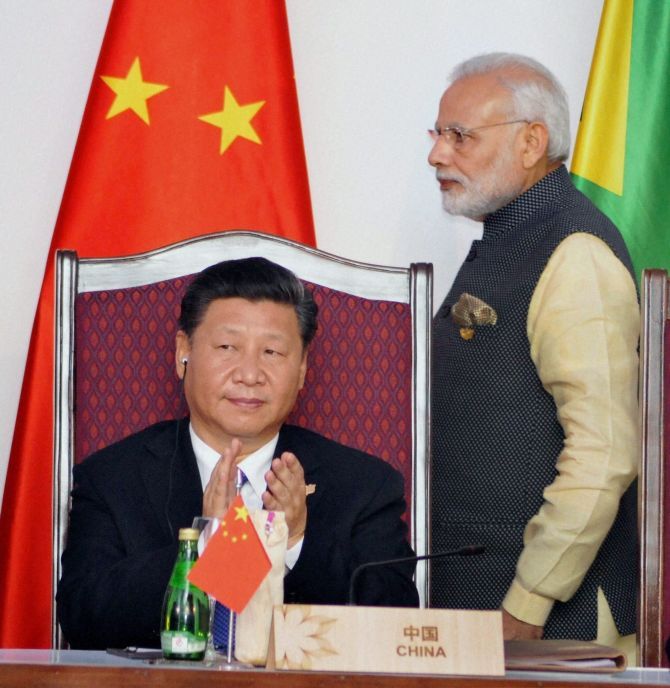 This commentary is not so much about the recent furore caused by China’s attempt to construct a road in the Doklam (or Donglong) Plateau as on the mindset that makes China go berserk from time to time over its purported claims over various parts of land and sea.

It is to express puzzlement over a several millennia-old civilization insensitively relapsing into bully-like behaviour without regard to the susceptibilities of sister nations.

As a member of the United Nations, China is pledged to adhere to 'justice and respect for the obligations arising from treaties and other sources of international law' and 'to practice tolerance and live together in peace with one another as good neighbours'.

I wish to ask China through this article how it so conveniently forgets the code of conduct arising from that membership by unilateral acts of adventurism, negating norms of international relations.

Whether it is the question of borders with neighbouring countries, or the South China Sea, or the Senkaku Islands, it is quick to adopt a stance of My Way or the Highway and presumes to lay down the law as if decision-making on any disputed claim is its sole preserve and prerogative.

It proclaims on its own a set of ever expanding core interests, a sort of surrogate Monroe Doctrine, which the world would ignore only at its peril.

Actually, regulation of relations between nations is not so radically different from that of inter-personal relations in complexion and character.

Maintenance of peace and harmony among nations requires that if there is a difference of opinion, honest or otherwise, or dispute, justified or otherwise, the first step is to avoid provocative actions which would further exacerbate feelings, and seek a solution by listening to both sides with patience and an open mind, or submit it to mediation or arbitration by tribunals established for the purpose and accept the verdict with grace.

It has become a set pattern of Chinese conduct over the years to keep the disputes on the boil, indulge in intimidatory tactics and attempt to create faits accompli.

The only concession to civilised behaviour it has made is giving up the use of obnoxious labels of 'reactionaries', 'paper tigers', 'Japanese devils', 'hegemonists', 'imperialist wolves', 'running dogs of imperialism; and the like all of which it used in the past at the drop of a hat.

The insults it heaped on Jawaharlal Nehru who went all out to befriend China and make it a respected member of the comity of nations can never be forgiven.

It came very close to an atavistic throwback to that tendency when it rubbed in the so-called 'lessons of history' of the 1962 debacle suffered by India at the hands of China in its angry response to the statement of the Indian army chief about India's preparedness to meet whatever threat to its security.

Further, in its utter contempt for finer feelings of other nations, it stages outrages at the most inopportune moments such as State visits, or some important event.

Just when Jawaharlal Nehru was extending his friendly hand to China, it gobbled up Tibet without so much as with your leave.

In 1979, just when Atal Bihari Vajpayee, as the foreign minister, was on a visit to China to strengthen relations, it invaded Vietnam, forcing him to break off the visit and then prime minister Morarji R Desai to express 'profound shock and distress'.

Just when poor Narendra D Modi was entertaining Xi Jinping on the swing in Ahmedabad, China makes a massive incursion with its troops into the Chumar sector of eastern Ladakh, compelling Modi to tell his guest that such incidents could impact the biggest of relationships 'just as a little toothache can paralyze the entire body'.

Even 24 hours after Xi saying that the People's Liberation Army had been asked to withdraw, the troops stayed put, falsifying Xi's promise.

Now, when Modi was having his maiden meeting with US President Donald J Trump, China is up to its old tricks again, by causing a distraction on the Doklam (Donglong) plateau.

One of the age-old tests of nobility in valour is that if you want to flex your muscle, you had better pick on someone your own size: China, in a small-minded way, picks on Bhutan to transgress into a territory which the latter genuinely believes to be its, and tries to impose its will, instead of resolving the difference in a decent manner appropriate to a great power.

In the process, it needlessly stokes the embers of suspicion and fears with reference to the Chumbi Valley and the 'chicken's neck' -- the narrow corridor which is the only point of entry for India to the north-eastern states.

By the way, lending credence to Bhutan's stand on the Doklam plateau is the fact that in the various discussions on delineating the Sino-Bhutan border, China had been asking Bhutan to exchange the north-western areas of Bhutan within which the Doklam plateau falls for the central areas next to the Chumbi Valley tri-junction, thereby tacitly accepting Bhutanese right of possession.

India’s concern arises from the fact that this plateau has a dominating effect on not only the Chumbi Valley, but also on the Siliguri corridor called the 'chicken's neck' mentioned earlier.

China already has some six roads leading to the north and north-western areas of Bhutan.

I want to ask the Chinese leaders: Is this what your great sages and philosophers have taught you?

As an ancient civilisation, and a great nation making rapid strides on the world stage, shouldn't you be a role model of propriety, restraint and prudence, instead of being a bull(y) in a China shop?

B S Raghavan is a former member of the Indian Administrative Service, and currently Patron of the Chennai Centre for China Studies.
He plays an active role in the Indo-Japanese Chamber of Commerce and Industry and is a frequent commentator on national and international affairs.
The views expressed are personal. 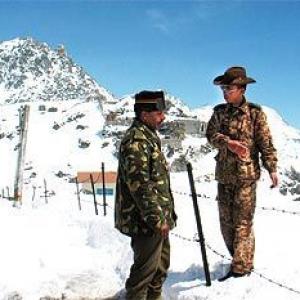