By M K Bhadrakumar
May 10, 2010 19:57 IST
China's profile as the South Asia's leading interlocutor highlights India's inability to lead its own sub-region. This is the stark message that the Indian establishment needs to cull from the Thimpu SAARC summit, notes M K Bhadrakumar.

Two veteran diplomats, one Chinese and the other an American, trudge their weary way from their respective capitals to the remote Himalayan kingdom of Bhutan to witness as 'observers' a gathering of eight leaders from South Asia agonising over the stasis of their 25-year old regional forum.

And then they retire to Beijing to exchange notes.

One year ago, which seems a long time ago -- before the financial crisis and the stalemate in Afghanistan and over Iran nuclear issue -- such a scenario would have been considered implausible, even illogical.

Yet, when the Chinese Vice Foreign Minister Wang Guangya received United States Assistant Secretary of State Robert O Blake Jr at Beijing last Monday for the first meeting of the newly-formed 'US-China Sub-Dialogue on South Asia', what seemed far-fetched moved into the realm of geopolitical reality.

The summit meetings of the South Asian Association for Regional Cooperation are better known as occasions for India-Pakistan diplomatic pageantry. The 16th SAARC summit at the Bhutanese capital Thimpu on April 28-29 was no exception.

Yet another India-Pakistan prime ministerial meeting did take place on the sidelines of the regional forum in a new attempt to breed a fresh format of dialogue unburdened by nomenclature between the two South Asian adversaries to try to tackle their intractable differences.

The new format may or may not prove enduring. However, the Thimpu summit will be seen in retrospect as a watershed event nonetheless where something fundamentally changed in the alchemy of regional cooperation in South Asia.

Plainly put, South Asian cooperation -- or the lack of it -- is henceforth going to be an international spectacle with the 'great powers' present as watchdogs and nudging the gyrating natives.

Equally, what emerges is that the region which withstood Cold War infections for decades, may not be so lucky this time as the world community gears up for what Ian Brummer, president of the Eurasia Group, recently called 'the fight of the century' between China and the US.

To be sure, the backdrop is unprecedented and intimidating. The US has become a long-term military presence in the region. Also for the first time in history, China is casting aside its millennia-old reclusiveness in Middle Asia and seems all set to pole-vault over the Himalayas.

It is interesting that the US-China sparring in South Asia is beginning with a gingerly round of mutual consultation to figure out each other's hardcore perspectives and unspoken intentions.

Which side took the initiative for the two-day cogitation last Monday remains unclear, since the venue is Beijing, China likely did.

The SAARC has seven other 'observers' -- Iran, European Union, Japan, South Korea, Mauritius, Australia and Myanmar -- but the sub-regional at Beijing keeps them out. Evidently, China and the US do not have a high estimation of their capacity -- including the Europeans and the Japanese -- to carry the burden of global responsibility to oversee the South Asian region's stability.

All the same, the US and Chinese approaches to the Thimpu summit present a study in contrast. Blake was perfunctory and correct. For record, he congratulated SAARC on its 25th anniversary this year and 'welcomed' their 'vision for greater South Asian regional cooperation'. In all probability, he spent his time fruitfully elsewhere in bilateral meetings.

The US state department spokesman in Washington awkwardly suggested that the SAARC summit was 'one of a number of important structures that you have across the broader Asia region.'

When his turn came, however, Vice Foreign Minister Wang instinctively warmed up. He stressed Beijing's desire to 'elevate friendly ties' with SAARC to 'a new level'. He viewed SAARC in ideological terms as a forum where 'China stands together with developing countries'.

'China is ready to strengthen practical cooperation with South Asian countries on climate change through bilateral channels and within the framework of south-south cooperation,' he said.

Wang assured that 'on the basis and in a spirit of equality and mutual benefit, China is ready to conduct dialogue and exchanges and expand practical cooperation with SAARC.' He announced a contribution of $300,000 to the SAARC Development Fund and invited the body's senior officials (head of foreign ministry) to visit Beijing.

Evidently, China takes its 'observer' status seriously. China reportedly aspires to seek membership of SAARC but India prefers that the regional body stays as it is with eight member countries belonging to the geographically definable region, and the bloc's charter stipulates that all decisions need to be unanimous.

India faces an existential dilemma somewhat similar to what Russia tries to overcome in Central Asia (and the US may face in the Middle East, Africa and Latin America or in South-East Asia) -- the surge of a red star over the slice of firmament which they somehow regarded to be their own sphere of influence where they determined the constellation, which they deemed uncontestable.

No analogy is complete. Unlike Russia in Central Asia, India never ruled its region but then the enveloping cultural ambience and the shared history and geographical space and the bindings of a common civilisational flow through millennia are perhaps far more profound.

Both Russia and India have a troubled history of relations with China in modern times and have fought bloody border conflicts but Russia has been more successful in coming to terms with the past.

One core difference is that the Central Asian region comprises autocratic regimes for whom Russia stands between them and the deluge, whereas South Asian regimes are practising democracies of one kind or the other which do not depend on India for political survival.

Besides, South Asians harbour an altogether different perception of China than what India may have -- China as a benefactor.

India's close neighbours like Nepal and Sri Lanka are eager to cultivate deeper Chinese friendship. And China has been responding with noticeable alacrity, which of course causes uneasiness in the Indian mind although there is no evidence that China obstructs the expansion of India's cooperation with its partners.

The hard reality is that the potential of India's economic cooperation with its neighbours -- except Nepal and Bhutan which are recipients of Indian aid -- remain far from explored and the emerging reality is that China may come from behind and overtake India in a near future.

India needs to get its act together

Unlike India, China places foreign policy primacy on its immediate neighbourhood and as Wang displayed, Beijing has a definite action plan to carry forward the impetus of cooperation with the South Asian neighbours.

The clock has begun ticking for India to watch out for a point when China overtakes India in terms of substantive volume of cooperation with the SAARC partners. China did a far more tricky stealth act on Japan and the US in South-East Asia.

For India, China is figuring as the number one trade partner. The bilateral trade target for 2010 is $60 billion and to quote Chinese Vice Foreign Minister Zhang Zhijun last week, 'I believe if we make the right efforts, we can even exceed the target.'

China is developing all-round cooperation with India's SAARC partners in a structured way. Curiously, China has been quite effective in the use of 'soft power' too.

In the tiny Maldives hugging India, more Chinese tourists visit than Indians. China plans to repeat its phenomenal success in putting 'soft power' as a cutting edge of its diplomacy in the Asia-Pacific and South-East Asia. India has tourist traffic of 1 million people with China, whereas the figure for South Korea (population: 48 million) stands at 5 million.

There is no evidence that Indian diplomacy is geared for what lies ahead as China makes its presence felt within the SAARC region as its most dynamic partner.

Already there is immense frustration among the SAARC countries like Nepal, Bangladesh, Sri Lanka and Maldives that the stasis of the regional body is rooted in the adversarial character of India-Pakistan ties.

In an extraordinary outburst at Thimpu, Maldives President Mohamed Nasheed demanded that India and Pakistan should 'compartmentalise' their mutual animosity and allow regional cooperation to gain traction.

China's profile as the South Asia's leading interlocutor highlights India's inability to lead its own sub-region and it erodes its credibility as a regional power. This is the stark message that the Indian establishment needs to cull out from the Thimpu summit once the dust settles down on the alluring India-Pakistan diplomatic road show there.

Delhi needs to re-evaluate the 'militarisation' of its foreign policy mindset in the past few years. India seems holding the wrong end of the stick of regional cooperation.

Without any such wasteful extravaganza as 'stringing pearls' around the Indian neck, Chinese diplomacy may make India look ineffectual. This happened to the US in the Asia-Pacific and South-East Asia.

The fact that Blake headed for Beijing fresh from the Thimpu summit of SAARC testifies to a geopolitical reality. 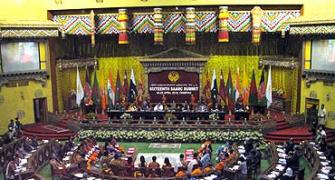 Focus on China, not India-Pakistan rivalry