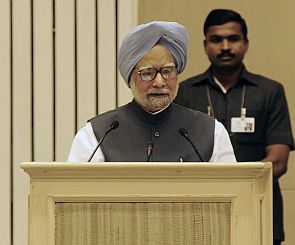 We present verbatim the full speech given by Prime Minister Manmohan Singh while addressing the chief minister’s conference on internal security at Vigyan Bhavan, New Delhi.

I welcome all chief ministers and other distinguished participants from states to this very important annual conference on internal security.

We are meeting today in the aftermath of the brutal and inhuman attack by left wing extremists on Congress leaders and workers and their security personnel in Chhattisgarh a few days back. Such violence has no place in our democracy. The Centre and States need to join hands to ensure that such events do not recur. I have noted from the agenda papers that there is a separate session on left wing extremism in this conference and I would urge you to make good use of this opportunity to come up with some concrete measures to deal with the very grave threat of Naxalism.

I must point out here that the challenge of Naxalism has received our serious attention for quite some time now. We have adopted a two-pronged strategy to deal with the challenge: conducting proactive and sustained operations against Maoist extremists; and, addressing development and governance issues in left wing extremism affected areas.

A number of measures have been taken as part of this two-track strategy. These include strengthening the security apparatus, improving road connectivity in 34 most left wing extremist affected districts, relaxation of norms of various development schemes in the affected areas, and the Integrated Action Plan for 82 selected tribal and backward districts.

We have achieved some successes too. In the last couple of years there has been a substantial reduction in the number of incidents and deaths caused by left wing extremist groups and an increase in the number of Naxalite surrenders. But, major violent attacks by Naxalites like the recent one in Chhattisgarh are setbacks that have occurred periodically. The Centre and states need to work together to eliminate such large-scale attacks.

The Central government on its part has already started taking steps in this regard. The cabinet secretary, the home secretary and my office have been involved in an exercise that would lead to a further strengthening of our defensive and offensive capabilities against left wing extremists. I hope that the state governments will cooperate fully with us and add to the effectiveness of these efforts.

I must also emphasise here that the two-pronged strategy that we have followed so far needs to be strengthened and pursued with rigour. Even as we intensify our efforts to strengthen the security and intelligence apparatus in areas affected by Maoist violence, we should be able to ensure that people residing in Left Wing Extremist affected areas are able to live in an environment of peace and security and derive full benefits of our development efforts.

To build a broader national consensus on the strategy to tackle the Naxalite challenge, government has convened a meeting of all political parties on the 10th of this month.

The year 2012 saw a significant improvement in the security situation in Jammu and Kashmir. Our strategy to prevent cross-border infiltration by militants and our intelligence based counter-terrorism operations in Jammu and Kashmir have resulted in a decline in the level of terrorist violence by about one-third in 2012 as compared to 2011.

In fact, terrorist violence parameters in 2012 have been the lowest since the upsurge in terrorist activities two decades ago. The record inflow of tourists and pilgrims during 2012 also points to an improved security situation in the state.

The implementation of several infrastructure projects in Jammu and Kashmir is progressing well. The Himayat and Udaan schemes which aim at providing additional gainful employment to the youth have also achieved a fair measure of success. These are all welcome developments.

The security situation in the North East continues to be complex, with insurgency, extortion and agitations being the main disruptive elements in the hands of the insurgents. However, there has been considerable progress in dialogue with several insurgent and ethnic separatist groups in the North-Eastern region.

The Gorkhaland Territorial Administration has been set up as an autonomous body in August 2012 to administer the Gorkhaland region and ensure its all-round development. The Centre is committed to providing financial assistance of Rs 200 crore per annum for three years for projects aimed at developing the socio-economic infrastructure in the GTA areas.

We are committed to undertaking and bringing to a satisfactory conclusion dialogue with all groups and organizations which are willing to give up violence to seek solutions within the framework of our Constitution. We are equally firm in our determination to continue assisting the States of the North-East to enhance their law and order enforcement capabilities, so that the people of the North-East enjoy the normal fruits of democracy and development.

I also wish to take today`s opportunity to draw your attention to two other issues relating to our internal security that require special attention. The first is the increase in number and intensity of incidents of communal and sectarian violence during 2012 as compared to the previous year. I am sure that all of us agree that maintenance of communal harmony in our country is critical for our continued growth and prosperity. It is absolutely imperative that we deal very firmly with communal forces of all types.

Simultaneously, we also need to recognise and address the special needs of minorities and weaker sections of our society, particularly Scheduled Castes and Scheduled Tribes.

The second issue which requires our collective action is that of crimes against women and children. We have recently enacted several laws providing stringent punishment for such crimes and more sensitive treatment of victims during investigation and trial.

These include the Criminal Law (Amendment) Act, 2013; The Sexual Harassment of Women at Workplace (Prevention, Prohibition and Redressal) Act, 2013 and the Protection of Children from Sexual Offenses Act, 2012.

We also need to put in place institutional mechanisms to ensure the safety and security of women and children, particularly in the urban context. Such mechanisms include sensitisation of police personnel, particularly at levels with which the victim comes into contact, setting up dedicated help-lines, measures for safety at the work place, and so on. I would urge all of you to explore how these outcomes can be best achieved.

Capacity building and modernisation of State Police Forces are absolutely essential for meeting the emerging challenges to internal security which range from terrorism to urban policing. The Centre remains committed to supporting States in this regard. The scheme for modernisation of State Police Forces has been extended for a further period of five years with a total outlay of about Rs. 12,000 crore. An amount of Rs. 433 crore has been additionally provided for Mega City Policing in the six cities of Kolkata, Mumbai, Chennai, Bengaluru, Ahmedabad and Hyderabad.

We are also committed to improving border management and coastal security. Greater focus and priority than before is being given to the work of fencing and construction of additional Border Outposts along the India-Bangladesh border, the construction and up-gradation of roads along the India-China, India-Nepal and India-Bhutan borders as well as the development of integrated check posts on the India-Pakistan and India-Nepal borders. We are also continuing implementation of the Border Area Development Programme and of Phase II of the Coastal Security Scheme.

The need for coordinated effort by Central and State agencies to deal with terrorism and other security challenges, irrespective of whether they are internal or external in origin, has been emphasised in all earlier conferences of chief ministers on internal security. In view of the criticality of this requirement, I would urge you once more to explore how we can achieve even better coordination between the Centre and States.

I also believe that time has now come to view the challenges of terrorism, communal violence and Left Wing Extremism in a holistic manner. I think each one of us needs to be completely objective in our approach to these issues, acting in national interest rising above narrow political and ideological divides. I would appeal to all political parties and all sections of society to work together to find effective ways and means of meeting these grave challenges.

Let me end by wishing this conference all success. I look forward to receiving your valuable suggestions on how to further strengthen the internal security of our country. 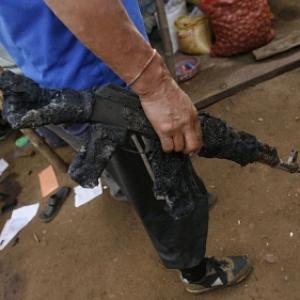 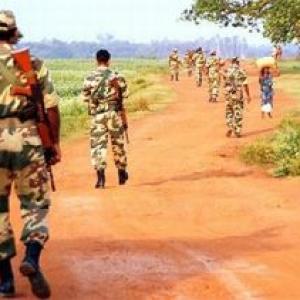 No talks, fight against Naxals to intensify: Chhattisgarh CM