Brand Devendra bulldozes all in Maharashtra

With 8 out of Maharashtra's 10 municipal corporations under the BJP's belt, and a stunning show in 25 zilla parishads and panchayat samitis, Chief Minister Devendra Fadnavis, says Prasanna D Zore, is all set for an encore when his party next faces the polls. IMAGE: Maharashtra Chief Minister Devendra Fadnavis during Ganeshotsav with his daughter Divija, centre, and her friend on their way to the Ganpati immersion at Girgaon Chowpatty in south Mumbai. Photograph: Sahil Salvi

The figures are mind-boggling and indeed tell a tale (Please see these links to see how the Bharatiya Janata Party in Maharashtra fared in the elections to the municipal corporations; zilla parishads; panchayat samitis).

The BJP's performance in the most prestigious of all municipal elections in the country, the election to the BrihanMumbai Municipal Corporation (with an annual budget of Rs 38,000 crores/Rs 380 billion), and victories in Pimpri-Chinchwad and Pune, has helped Chief Minister Devendra Fadnavis, a Nagpur native, become Maharashtra's Narendra Modi, as some in the Marathi media have begun calling this underdog from Vidarbha.

With victories in these elections, Fadnavis has become a pan-Maharashtra brand as he displayed his electoral and organisational acumen across the state, punctured the Maratha pride in the Maratha bastion of Pune and Pimpri-Chinchwad, and bulldozed his way with 82 seats in the Shiv Sena's BMC heartland, almost thrice the seats the BJP won in 2012 (31), and stamped the BJP's big brother mark all over the face of its friend-turned-foe.

Interestingly, Mumbai, and by extension Maharashtra, would have had a political Mahabharata unfold had six BJP candidates, who lost this BMC election by less than 200 votes, made their way to the richest municipal corporation in India.

Fadnavis' intra-party rivals, Pankaja Munde and Eknath Khadse, who had claimed the Maharashtra throne as theirs at different points in the last two years since Fadnavis' ascension in October 2014, have had to eat humble pie.

Dhananjay Munde, Pankaja Munde's cousin who switched sides to Sharad Pawar's Nationalist Congress Party before the 2014 assembly election, cut her influence to size in her home borough of Beed. The NCP won 51 seats in panchayat samitis in Beed against the BJP's 44 and 25 zilla parishad seats to the BJP's 19.

Khadse is battling charges of corruption.

With victory in almost 50 per cent seats in the 10 municpal corporations, 28 per cent seats in panchayat samitis, and 27 per cent in zilla parishads at the district level, the BJP under Fadnavis has spread its wings across urban, semi-urban and grassroots areas.

Now that the Maharashtra chief minister has cemented his position firmly within his party and proved that he is capable of taking on an aggressive Shiv Sena and the wily politicians of Western Maharashtra, he will now look to further bolstering Brand Devendra during his government's remaining tenure.

That the Sena was weakened in its Mumbai stronghold -- party president Uddhav Thackeray and senior Sena leaders were confident of winning 100 plus seats in the BMC, but won 16 seats less, 84 -- and the Pawars meekly surrendering their political heft to the BJP in the Pune and Pimpri-Chinchwad municipal corporations, Fadnavis can comfortably cross swords with ministers roaming around with resignation letters in their pockets.

He will soon joust with the Sena when he likely shuffles his ministers next month. Fresh from the astounding victories across the state, Fadnavis' political skills will face a test in the way he treats the Sena.

But that is if the Sena does not withdraw support to his government if the BJP disallows it to grab the mayor's post in Mumbai.

The fate of the Maharashtra government, some senior Sena leaders say, will depend on how the BJP-Sena love-hate chemistry pans out in the next few weeks and rest on who gets to install the city's first citizen.

Withdrawing support to the state government -- many Sena MLAs and MPs are still bragging about their 'teku' (support) to Fadnavis -- and asking its ministers to resign from the Narendra Modi government at the Centre will be committing political harakiri for the Sena which just has the Thane Municipal Corporation, where it won single-handedly, on its assets side.

In this BJP-sweeping-the-state frenzy one must not forget the venom spewed by the two allies against each other during the municipal election campaign.

Fadnavis and Mumbai BJP president Ashish Shelar incessantly talked about 'transparency' in the BMC's functioning, alluding indirectly that the Sena's reign in the BMC was corrupt.

Sena leaders ranted about criminalisation of the BJP and its corruption in the Nagpur municipal corporation -- Fadnavis is a former mayor of that city -- where the BJP retained power in this election too.

Given the way the Sena and BJP fought the 2014 assembly election independently and then came together to share the spoils of power in Maharashtra, history is likely to be repeated this time too.

While nobody can predict for sure the course Maharashtra politics will take in coming days, the Maharashtra chief minister can bask in the glory of decimating his rivals at the hustings for now and work harder to burnish Brand Devendra that he has so meticulously carved out. 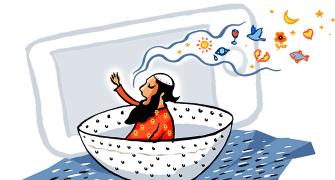 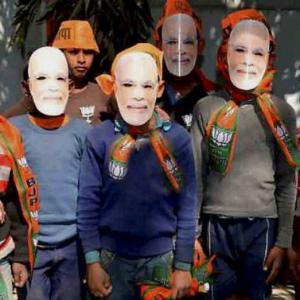 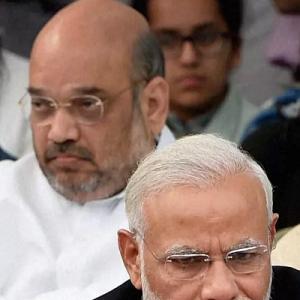