Bitter home truths from a chaiwala

'People like me worry about our next meal, not about what meat we eat... and we certainly don't have the luxury that you have, of holding vigils for faceless people we've never known,' a chaiwala tells Geetanjali Krishna at the Not In My Name protest.
Illustration: Dominic Xavier/Rediff.com 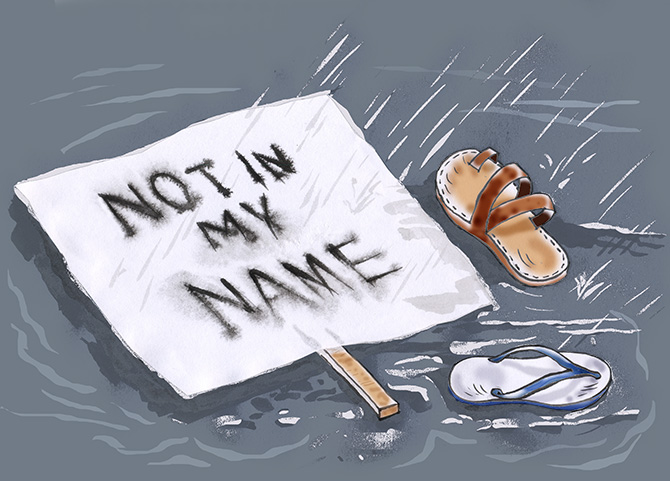 Last month, I went to Jantar Mantar in Delhi with my children to protest against the recent spate of lynchings against supposed beefeaters.

For once, the crowd milling about us seemed oddly comforting. It eased, if only for a fleeting moment, the growing sense of isolation I've experienced watching liberalism and nationalism migrate to the polar opposite ends of the political spectrum.

The moment of comfort was short-lived, as such moments often are, ending with a couple of conversations I had during and after the protest.

But first, let's back up to that moment when we walked around listening to beautiful, civilised poetry and song, raising placards that read, 'Not In My Name'.

It felt so good to be surrounded by people like me -- proud to be labelled 'libertards', 'presstitudes' and all, who shared the same angry sadness over the growing polarisation of our social fabric.

I recognised a couple of professors and students from Delhi University and Jawaharlal Nehru University, journalists whose works I admire, theatre personalities and many more.

I realised most were even dressed like me, in handmade leather slippers and Fabindia kurtas.

Some of them, with scant regard for their ethnic chic, plonked on the pavement and ordered rounds of chai to celebrate the cloudy weather.

A young fellow, probably the same age as the victim of the most recent lynching, Junaid Khan, brought them their tea.

It was a good turnout, I commented to him by the way of a conversation starter. He agreed, then asked, "What is it for?"

I explained briefly about cow vigilantes and the lynching of innocents suspected of being beefeaters.

He was unimpressed. He saw such rallies every day, he said.

"GM Mustard, Right to Information... the cause changes, but I feel the people protesting here look exactly the same, day after day..."

Junaid was probably his age, I said. Didn't that resonate with him at all?

He shifted uncomfortably, and said he had to go.

He wanted to do as much business as he could before the rain started.

"Anyway, when I look around, all I see are people like you and not people like me," he said.

"People like me worry about our next meal, not about what meat we eat... and we certainly don't have the luxury that you have, of holding vigils for faceless people we've never known."

I watched him leave with a growing sense of disquiet.

By then, a stirring performance by senior theatre artiste Maya Krishna Rao was underway.

"Not in my name," she shouted, as we cheered.

A young student broke down and was comforted by people around her.

By now, however, my comfort at being surrounded by people who felt just like me, had been eroded by the young chaiwala's remarks.

Would a protest meeting like this make even a ripple if it only preached to the pulpit?

Was anyone else even listening?

The heavens suddenly opened up, drenching us instantly. It was time to leave.

As I got into the car, the driver said he'd seen a couple of my friends in the overcrowded parking lot.

"Madam, everyone here looked so familiar. Was this event like Dastkar's Nature Bazaar?" he asked in all innocence.

Wet and cold, I settled down into a gloomy silence as my social media pages erupted with stories of the protest, simultaneously held in over 12 Indian and a couple of foreign cities.

Thousands had attended, but it was still not enough.

All we were, I felt, was a bunch of lonely needles in a gigantic haystack.