Syed Firdaus Ashraf spends a week in Goa in pursuit of his favourite dish, and discovers a few other things about the state as well.
Illustration: Uttam Ghosh/Rediff.com 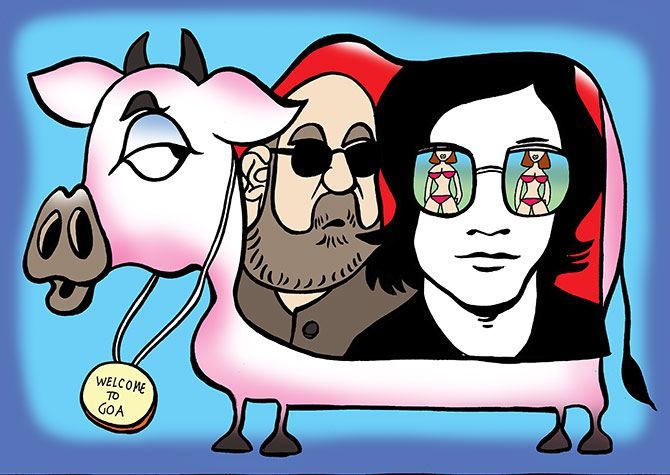 I had no plans for a holiday in Goa. My original travel plans revolved around going to Mahableshwar, the hill station which is a six-hour drive from Mumbai and is known for its cool climes, especially in summer.

However, in the second week of March, when I went to eat my favourite dish -- beef steak -- at a Mumbai restaurant I was told it would not be served anymore as the Maharashtra government, ruled by the BJP and Shiv Sena, had banned beef.

The anti-beef law was quite severe -- it recommended five years imprisonment for anyone found eating beef. The ever-considerate BJP-Sena Sarkar had permitted the consumption of buffalo meat, but as any beef lover will tell you, it is like asking a chain smoker to make do with e-cigarettes.

So it was no stroke of genius that I dropped Mahableshwar from my travel plans and settled for Goa instead. After all, beef was easily available in this small state where Christians are in sizeable number.

So I booked my ticket, lobbing off five days from my leave quota to devote to eating beef. The BJP government in Goa had not thought it fit to emulate its neighbour and ban beef.

When I googled Goa, a wiki page informed me that Goa's name was derived from Gomanta, Gomanchala, Gopakapattam, Gopakapuri, Govapuri, Govem and Gomantak. The Mahabharat refers to the area now known as Goa as Goparashtra or Govarashtra, which means 'a nation of cowherds.'

How could one eat beef in Goa when its very name was derived from a 'nation of cowherds,' I wondered.

Goa Chief Minister Laxmikant Parsekar gave me the answer. He told the Indian Express (external link): 'As the CM, I have to take care of all the people in the state including its 38 per cent minorities. Christians account for 30 per cent of the population while the remaining are from the Muslim community. It is not like they started consuming beef recently, this has always been a part of their daily cuisine. How can I ban it?'

Since Muslims and Christians account for less than 12 percent of Maharashtra's population, their votes did not matter to the BJP and therefore it could simply ban beef without worrying about the electoral fallout, whereas in Goa, Christian votes mattered and therefore the BJP dare not outlaw beef.

I stayed at the Resort Terra Paraiso. It served an incredible Beef Stroganoff, which I rate among the best I have eaten!

A perfect blend of gravy mixed with rice, chilly and beef, it was not too hot to handle and I would easily give the dish 10/10.

On inquiring, I discovered that the resort was owned by Michael Lobo, a Goa legislator.

Ah, a Christian, the Mumbaikar in me thought, no wonder he is serving beef at his hotel. So which party did he belong to? The Congress?

No! The BJP. Naturally.

Gen2000 may not know him, but oldtimers knew him as the 'Bikini Killer.' How could one be in Goa and not recall Charles Sobhraj's grisly exploits!

Currently the subject of a Bollywood biopic, with Randeep Hooda playing him, Sobhraj, between 1972 and 1982, committed at least 20 murders in India, Thailand, Afghanistan, Turkey, Nepal, Iran and Hong Kong.

He picked out lonely European tourists, conned them of money, jewellery, passport and identity papers, and eventually killed them.

Sobhraj was arrested in 1976 and was lodged at Tihar jail from where he escaped in March 1986. Everything about him was sensational including his escape and his re-arrest which was to follow shortly.

News of his escape stunned pre-Arnab India because it was then thought that escaping from Tihar was almost akin to getting out of Alcatraz.

Inspector Madhukar Zende of the Mumbai police, who arrested him in 1971, knew of one of the half-Indian Sobhraj's weaknesses -- good food. Zende knew Sobhraj liked Chicken Cafreal and would visit the O Coqueiro restaurant in Goa, for its signature dish.

So it turned out that on April 6, 1986, Zende arrested Sobhraj, who was at O Coqueiro, savouring the dish of his choice -- the restaurant has immortalised the scene by erecting a statue of the criminal sitting at a table.

You may want to know how Sobhraj's fave dish fared with me.

Forget it! Instead, try O Coqueiro's Beef Steak, easily one of the best in India.

On the last day of my holiday I saw huge hoardings of BJP boss Amit Shah, who was coming to Goa to talk up the Modi Sarkar's achievements after a year in office.

Shah, I thought, would ask why if beef was banned by BJP governments in Haryana and Maharashtra, it should not be banned in Goa too.

Imagine my surprise when Shah downplayed the beef ban while interacting with the media in Goa. He seemed reluctant to say much about it and got off with a bland, 'The Goa government will decide on a beef ban.'

In other words, leave it to Laxmikant Parsekar who has already announced that beef will not be banned in Goa.

So, much to the disappointment of the BJP's anxious-to-prove-his-Hindutva-credentials leader Mukhtar Abbas Naqvi who wanted those who eat beef to go to Pakistan, Indians who like beef have another option. 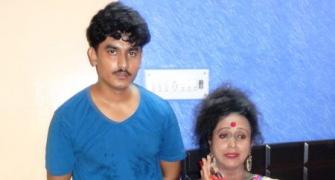 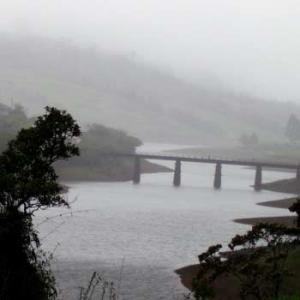