News
Business
Movies
Sports
Cricket
Get Ahead
Money Tips
Shopping
Sign in  |  Create a Rediffmail account
Rediff.com  » News » We are in denial, but Bangladeshis are still flooding India's northeast

We are in denial, but Bangladeshis are still flooding India's northeast 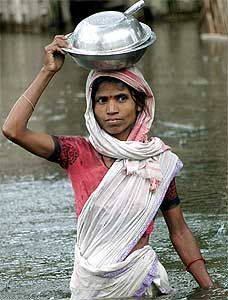 The local labour force is streaming out of the region looking for jobs in peninsular India, creating a vacuum that makes it easier for the Bangladeshis to fill in, says R N Ravi.

Contrary to the state government’s lore -- that the unregulated influx of Bangladeshis in Assam is a thing of the past -- a recent field research by the writer shows that it is a live and kicking phenomenon. More and more Bangladeshis are filling the expanding labour and low-end services sectors in Assam and its neighbouring states in the northeast.

Mutation of once visceral existential fears over the unregulated migration of Bangladeshi nationals into an inexorable fatalism has been one of the striking characteristics of contemporary socio-political landscape of Assam.

The issue that has seismic implications for national security, the future of Assam and its neighbours and which had once erupted into the historic Assam agitation (between 1979 and 1985) seems to be mourning at the margin today.

The Congress has consistently rubbished the noise over illegal Bangladeshi migration as a mere bogey raised by its political rivals.

Meanwhile, the census of 2011 has tilted the argument against migration.

Unlike the previous decadal censuses since the beginning of the 20th century that showed unusually high population growth in Assam, attributed to migration from Bangladesh and its earlier reincarnations, the census of 2011 showed a decline to 16.93, below the national average of 17.64.

The Congress government flaunts it to bolster its long-held position denying the Bangladeshi migration and rebuffing those who feel otherwise.

The decline in the decadal growth rate of Assam’s population from a significantly high figure to merely the national average and then to one below the national average in the latest census gives an impression that Bangladeshi migration to the state is a phenomenon of the past.

However, emerging new settlements of Bengali Muslims at the outskirts of cities and towns of Assam and the absence of an effective border control regime make such a conclusion counter-intuitive.

The census data, usually, is considered the most authentic source for insights into demographics and its nuances. However, in the northeast, it has not been entirely above suspicion. Several local communities suspect its integrity.

Absurd data like a considerable four per cent negative population growth in Nagaland in the 2011 census lends weight to their suspicion. In such a scenario, it made sense to look for empirical evidence on the issue to discern the truth.

An empirical research conducted in the eight colonies of settlers that emerged in the last two decades at Lahorijan in Karbianglong district of Assam, adjoining Dimapur in Nagaland, has revealed some startling facts.

Lahorijan is in close proximity to Dimapur town. It is littered with sprawling unauthorised colonies of Muslim settlers. Some of the colonies -- Dudu, Balijan and Shantigaon -- are huge unauthorised settlements, each with nearly 15,000 or more inhabitants. The assessed population of the eight colonies that were subject to the survey was over one lakh.

The study has revealed that the majority of the colony dwellers were displaced families from other parts of Assam who were rendered homeless and landless due to periodic floods and erosion. However, at least 26 per cent among the settlers were found to be illegal migrants from Bangladesh who arrived after 1990 and continued to stream in, at a higher pace, in the last decade.

Although each of the one thousand families in the eight colonies randomly picked up for the survey claimed to have been displaced from other parts of Assam, 26 per cent among them furnished false pre-displacement addresses.

Verification of the revenue records and on the spot detailed inquiries at the given previous addresses revealed their deceit.

Later, when they were confronted with their falsehood and likely Bangladesh origin, they shied away from further scrutiny. The study focused more comprehensively on these families.

Unlike the displaced families from other parts of Assam who invariably shifted the whole family including the children, the aged and the infirm, the migrants from Bangladesh were mostly adults, all in the age group between 20 and 50 years.

The Bangladeshi migrants were overwhelmingly illiterate, though a few among them were semi-literate.

Over 50 per cent of them were daily wage labourers engaged in construction and farm work.

Nearly 25 per cent plied rickshaws and six per cent were involved in masonry. The rest earned their livelihood through a host of activities including hawking, tailoring, plumbing, carpentry, rag-picking, working in restaurants, shops and as housemaids.

One was a teacher in a makeshift school in one of the colonies and another one was a maulvi at a newly set up mosque.

These colonies began emerging in the late 1980s but gathered momentum in 1990s.

Nearly 36 per cent of the Bangladeshi migrants in these colonies came into existence in the late 1980s.

About 26 per cent were formed between 1990 and 2000, indicating a decline in the pace but it picked up in the subsequent decade -- 2000-2010 -- during which approximately 40 per cent of them arrived and settled there.

The study revealed a direct co-relation between the increase in the volume of central funds to the northeast and the pace of illegal Bangladeshi migration. These Bangladeshi migrants, contrary to the orthodox view about them, do not engage in their traditional wetland cultivation. They cater to the needs of labour in the non-agricultural sector.

Steadily increasing flow of funds from the Centre to the northeast since the days of the National Democratic Alliance’s rule -- that adopted the policy of 10 per cent budgetary allocation of all the Union ministries to the region -- has created a skewed economic landscape due to the growth of urbanisation without any industrial base.

The scenario is such that a few are getting richer overnight while the bulk of population remains largely untouched by the growth story.

Construction activities are at an all-time high. Shopping malls, restaurants, personal healthcare institutions, spas and beauty parlours are mushrooming at the urban centres.

In contrast, in rural areas, millions are still rendered homeless and forced to live on the road for months on end due to the rampaging floods. Children are forced to abandon schools, disrupting their academic calendars for several months, during the floods.

Some 20 years of the North-East Industrial Policy -- aimed at boosting industrial growth in the region -- and the inflow of torrents of development funds for the last decade and a half have failed in providing a credible industrial base and dignified job opportunities for the youth in the region.

The local labour force is streaming out of the region and to the rest of India in huge numbers for menial low-paid jobs as private security guards, plantation workers, domestic aids, road construction laborers etc.

A recent study (International Journal of Current Research, Vol 6, January 2014, Jyotikona Chetia) shows how diminishing avenues of traditional livelihood and absence of job opportunities are driving hordes of youth from Dhemaji district in Assam to the rest of India in search of menial jobs.

The study shows that the distraught parents encourage their teenaged sons to escape the local environment -- of uncertain life and absent livelihood -- to remote corners of India even when the wages are pitifully low.

The magnitude of the youth exodus may be gauged from the fact that from Gormua, a village of 700 households in Sissirborgaon block, over 400 young men have left for peninsular India in search of menial jobs. Such bulk exodus of the youth from rural Assam is causing serious socio-cultural distortions.

One of the aftereffects of the youth exodus is a labour vacuum in the state that makes it easier for the Bangladeshis to fill.

The emerging pockets of palpable prosperity and concomitant demand by the neo-rich for luxuries and artifacts of a better life have created enhanced pressure on labour for unskilled or semi-skilled services.

Such demands are acting as pull factors for Bangladeshi immigrants. A robust ethnic support base comes in the way of their detection as they have little difficulty in getting absorbed in the local milieu.

The study revealed that the present format of special developmental assistance to the region -- instead of absorbing the local youths -- is providing employment to a large number of Bangladeshis and is an incentive for further influx.

The continuing unregulated influx of Bangladeshis in the northeast is fraught with insidious geopolitical and security implications for the country.

And for the northeast, especially Assam, it is an existential issue. Confronting it with due seriousness is a long overdue imperative for India’s national security.

Image: A flood victim carries her kitchen utensils on her head while walking through her flooded neighborhood to a relief camp in the village of Bijuli Bari, in Assam. Photograph: Reuters 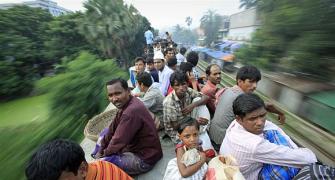 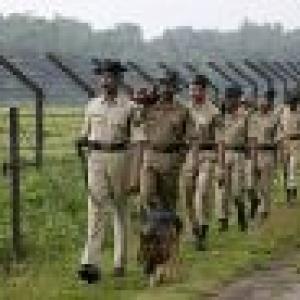