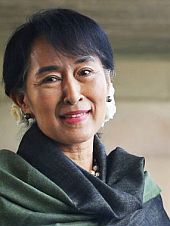 Aung San Suu Kyi has had no qualms over taking decisions and advocating policies on the basis of her perceptions of Myanmar's national interests and her interests. Why then should India have a guilt complex for having allowed realpolitik considerations to influence our priorities and decisions, argues B Raman

Myanmarese leader and Nobel Laureate Aung San Suu Kyi is presently on a visit to India where she grew up and studied as a teenager when her widowed mother was posted as her country's ambassador to India.

During her trip, Suu Kyi delivered the Jawaharlal Nehru Memorial Lecture in New Delhi. She gave an interviewed on November 15 to news channels NDTV and CNN-IBN. Before her arrival in New Delhi, the Myanmar leader gave a detailed interview to Nirupama Subramanian of The Hindu.

Her lecture and interviews have made a positive impact on the public mind and highlighted her affection for India and her understated regret that during the long years she was under house arrest, India avoided taking up vigorously the cause of the human rights of the Myanmar people.

In her reply to one of the questions posed by NDTV, she stated that she understood that Indian interests influenced its decisions towards her country and its military government.

There is no need for us to have a guilt complex for having allowed realpolitik considerations to influence our priorities and decisions when she was under house arrest. Suu Kyi herself is a practitioner par excellence of realpolitik.

After she was released following an agreement with President Thein Sein and got elected to Parliament, her priorities in respect of foreign visits have been Thailand, the European Union, the US and India. She intends to go to China last. As between India and China, her priority is India. As between the West and India, her priority has been the West.

Recent reports from Myanmar speak of certain disillusionment among sections of the Myanmar political class over her perceived preferences for the West as against Myanmar's Asian neighbours.

Since she became politically active, she has been focussing on two issues -- keeping up the pressure on President Thein Sein and his government to keep moving on the road to internal democratisation and external opening-up and keeping up the pressure on the West to remove the remaining economic sanctions and curbs on western investments in Myanmar.

In matters of interest and concern to India, her policies and pronouncements have been marked more by discreet silence than clear articulation.

She has avoided a clear articulation of her views regarding the human rights of the Rohingya Muslims. This is an issue that in the medium and long term could have an impact on our Muslim community in the north-east.

She has not uttered a word on the question of compensation for Indian businessmen who were driven out of Myanmar in the late 1950s and 1960s after seizing their property.

What I have enumerated above would show how she has had no qualms over taking decisions and advocating policies on the basis of her perceptions of Myanmar's national interests and her party's interests.

If we had taken realpolitik decisions in the past on the basis of our perceptions of our national interests, there is no reason to let a gnawing feeling of guilt affect our future policies. Myanmar is an important buffer state between India and the Yunnan province of China.

If there is another military conflict with China due to the pending border dispute, the policies and attitudes of the Myanmar government will have an impact on our ability to counter the Chinese designs.

We have to identify those sections of the Myanmar society and administration which will be favourably inclined towards paying attention to these interests and strengthen our links with them. At present, only the Myanmar armed forces and the government dominated by them have a positive comprehension of our interests and have been inclined to take notice of them.

Suu Kyi and her National League For Democracy have not shown such comprehension and such inclination. It will be unwise on our part to dilute the links that we had built up with the armed forces and the government dominated by them just because of our affection for Suu Kyi and our tendency to romanticise her.

We must strengthen our relations with her and her party and build on the emotional links of the past without allowing the realpolitik links with the armed forces to rust. 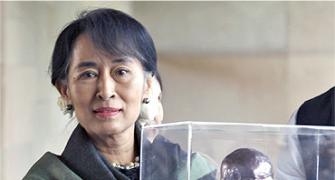 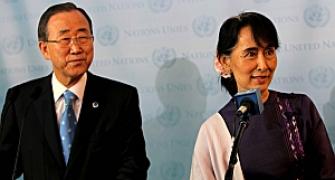 Democracy for Myanmar is common goal with Shein: Suu Kyi
Mahatma would have insisted that India stand by us: Suu Kyi 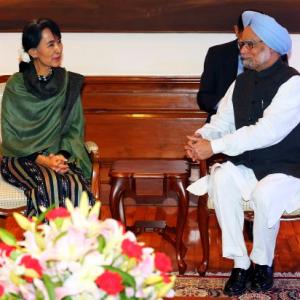 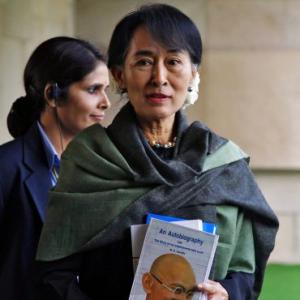