News
Business
Movies
Sports
Cricket
Get Ahead
Money Tips
Shopping
Sign in  |  Create a Rediffmail account
Rediff.com  » News » Available: A votebank on the distaff side

Available: A votebank on the distaff side

Bihar Chief Minister Nitish Kumar has shown it is possible to form an electoral base with pro-women policies that matter, so why don’t other political parties replicate it, asks Devanik Saha. 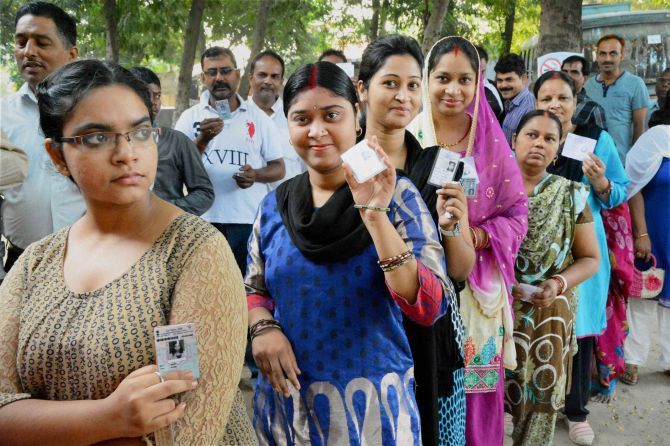 The recently concluded Bihar elections was one of the most keenly fought in the past one and a half years, even though the final result doesn’t portray how close it was.

The Mahagathbandhan swept the election with an almost two-thirds majority, and the Bharatiya Janata Party suffered an embarrassing defeat despite Prime Minister Narendra Modi addressing as many as 29 rallies.

Every political party has a vote bank based on religion, caste or even a specific age demographic. The grand alliance’s victory has been attributed to the perfect caste arithmetic worked out by the grand alliance, but it is evident that without Nitish’s impressive track record, such a massive win wouldn’t have been possible.

A few years ago, Anurag Thakur, BJP’s member of Parliament, organised a panel discussion on women’s safety, which consisted of eminent personalities such as Arun Jaitley, Chetan Bhagat, Vivek Oberoi, MP Jay Panda, among others.

I do not remember much details of what transpired at the event, but a fascinating suggestion by Vivek Oberoi has remained etched in my memory. During a response to a question from a member of the audience, he asked, “Why don’t political parties focus on creating a women’s vote bank, rather than based on religion and caste?” At that particular moment I didn’t give it much of a thought as I believed it was not something unusual, given the theme of the panel discussion.

However, a few weeks back, I was forced to think about it when I read several reports by political journalists and analysts who were covering the Bihar elections. Almost everyone noticed one specific trend -- women across Bihar loved Nitish Kumar, the reason being the success of his women-centric welfare schemes and policies, which had a significant impact on their lives.

The Mukhyamantri Balika Cycle Yojna, started in 2006, has been a phenomenal success. The scheme provided bicycles to girls who clear class eight and enroll in class nine. Furthermore, Bihar has had the distinction of being the first state to increase the reservation for women pn Panchayats from 33 per cent to 50 pc of the seats. ‘Women have increasingly become the agent of change in Bihar. In 2005, the Janata Dal-U came to power because the people were tired of the lawlessness and violence under Rashtriya Janata Dal rule. Nitish recognised this and it reflected in his policies which were different, such as the cycle scheme,’ Shamika Ravi, a fellow at Brookings India, a think tank, said in an interview to the Mint.

In his manifesto, Kumar promised 35 pc reservations for women in all government jobs and even hinted at prohibiting liquor sales.

An analysis of the election data by the Hindustan Times showed that the MGB won 80 pc of the constituencies where the voting percentage of women was higher than that of men. It won 87 of the 98 assembly seats where the gap in numbers between women and men who came out to vote was more than 10 percentage points. The report further showed that the MGB won all the 10 constituencies where women outnumbered men by the widest margin in terms of turnout.

That a chief minister who has been ruling since 10 years, faces no anti-incumbency and finds considerable favour among the women electorate, is indeed praiseworthy.

Therefore, the question which arises is: Will political parties will take a cue from Bihar and focus on developing a women’s vote-bank?

However, the important factor to consider is that every state is not Bihar. Women’s expectations in Bihar are entirely different from those of the women in Delhi. Maharashtra’s expectations would differ from Meghalaya’s. A farmer’s wife in Vidarbha would expect monetary support in times of distress while a woman journalist in Delhi would expect better security measures.

It is imperative that while parties should learn from the JD-U’s success, they should understand the actual needs of their women electorate and not jump on to the women’s populism bandwagon just to gain votes.

There is a thin line between empowerment and appeasement. Often, populist policies aiming at the appeasement of a certain section of society lead to discontent among the others. Several state governments such as Uttar Pradesh and West Bengal have been criticised for their over-appeasement of Muslims, which has led to widespread discontent among Hindus and the rise of rabid Hindutva elements.

Recently, the prime minister of Canada, Justin Trudeau, received much praise worldwide for his decision to allocate 50 pc of his cabinet ministries to women. Furthermore, the remarkable diversity of his cabinet, which comprised an astronaut, a scientist, a successful businessman, a geologist, among others, astonished everyone.

While it would too farfetched to expect Indian politicians to match what Trudeau has done, but clearly, Nitish Kumar, or Sushasan Babu as he is known among voters, has set a remarkable precedent in politics.

Image: Women lining up to cast their vote during the recent assembly elections in Bihar. Photograph: PTI Photo. 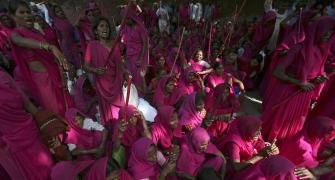 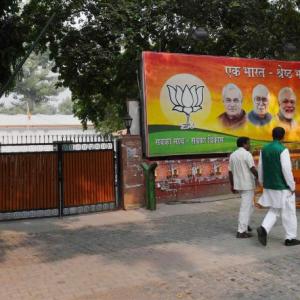