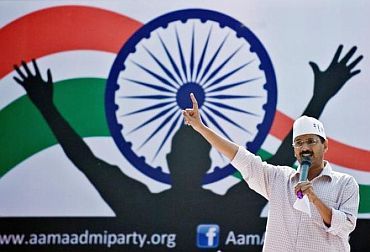 With Congress hubris reduced to ashes and the BJP’s advance halted -- a new political force has made its entry in the turbulent waters of Indian politics. It is a new force, with people who seem to be ready to learn and who have, at every step so far, responded by taking seriously all the criticisms that were levelled at it, says Aditya Nigam.

Over a year ago, I had written on Kafila.org about the (Ir)resistible rise of Arvind Kejriwal, (external link), a phenomenon thoroughly misread from the beginning to this moment, by free radicals and Left devotees of Congress-style politics. Taking the risk of saying ‘I-told-you-so’, some lessons need to be underlined, learnt from the political developments of the last three years. That post said -- referring back to the days of the Anna Hazare movement (itself dubbed reactionary, casteist, even RSS-sponsored and fascist, by pundits of all hues):

But here was the political class and the intelligentsia from Left to Right taking the protestors to task -- asking them to tame their dissent and channel it through ‘proper channels’. Contest elections and let us see how much support you have, they challenged. Anna Hazare stuck to his guns, refusing the bait. Kejriwal, however, seems to have decided to call their bluff. And much before the last hunger strike failed, his political mobilisation started moving away from the single point agenda of the Lokpal Bill.

Apparently taking up the challenge and moving towards the constitution of a political party, Kejriwal has entered the field in a manner that might even begin to pose an electoral challenge to ruling as well as opposition parties. How much of a challenge it will be we cannot say. However, one thing is quite clear: It will probably introduce an element of serious uncertainty in the coming elections, whenever they are held. Old formulas will cease to work. Equations are bound to change with new imponderables entering the scene.

As the trends of the Delhi election results become clear this morning, it is evident that a major dent has been made in the way electoral political calculations are generally made.  With Congress hubris reduced to ashes and the BJP’s advance halted -- a new political force has made its entry in the turbulent waters of Indian politics. It is a new force, with people who seem to be ready to learn and who have, at every step so far, responded by taking seriously all the criticisms that were levelled at it.

From all available indications, the Aam Aadmi Party has drawn huge support from the poorest inhabitants of the city, even while it has drawn equally substantial support from the middle class sections -- especially middle class youth. Naysayers and Facebook radicals apart, anyone who has any feel of the ground, could see well in advance that this was coming.

It was coming not only because of the charisma of Arvind Kejriwal -- though one must not underestimate the fact that the gathering storm of anger with Congress corruption and arrogance could well have dissipated or worse, pushed the BJP upwards to something in the region of 50 seats (out of 70), had it not been for Kerjiwal’s determined leadership.

This big shift was coming because, in the wake of mass scale corporate loot of public resources, every other party had been seen to be lying prostrate or grovelling before the same corporate houses that were involved in the loot. Natural gas, mining, land, forests -- all thrown to capitalist wolves. The 2G Spectrum scam, the loot in the name of Commonwealth Games. The Niira Radia affair. Everything was stinking -- and yet our free radicals, the custodians of political propriety and correctness, could see nothing.

Except their own fears that were projected, as always, to some external enemy. These radicals are always comfortable with power and all their free-floating bile (of which there is a surfeit in the virtual domain) is always reserved for those who come out and fight. They could not see what the common person on the street has come to understand long ago: that the entire political class is a surrogate of the rich and the powerful. The rich and the powerful it is who fund their election campaigns, and keep their political machines well-oiled. And in a perverse way, all parties from the Left to the Right have come to believe that only by grovelling before capital can they run their governments successfully.

This was the context of the Anna Hazare movement. The profound energies unleashed by the movement were what appeared once again on the streets last year during the mass protests in Delhi against the December 16 gangrape incident. Thousands of young people out on the streets, demanding justice, were met by a hubris-ridden, undignified government with water cannons and police repression. A government that did not even have the grace to come out and accept that all that these people needed was reassurance that justice will be seen to be done. The memory of that repression and the rapid political education of the youth involved in that protest movement is what took the shape of the political storm that is blowing the Congress government away.

On the day of the elections, a friend of mine tells me, his Congress friends were out in cars with cartons of Bagpiper Gold and wads of currency notes in their pockets. At the end of the day, having finished their work, when they sat in their own addas, they confessed to having voted for the jhadu. This is only a small indication of the shifts that have been taking place.

While our more studied analysis will have to wait for the final results to be out, there is no doubt that a new force has arisen that is not constrained by the pathetic helplessness of the Left and the free radicals.

Personally speaking, I think it is a good situation for AAP to be in if it remains the second largest party. In Opposition it can work better and learn the nuts and bolts of government. More importantly, it will be now left free to build its base in a couple of other states for the final round -- the 2014 elections. 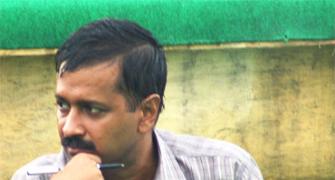 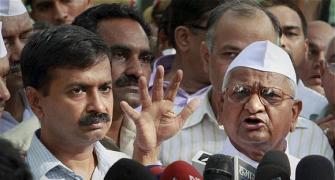 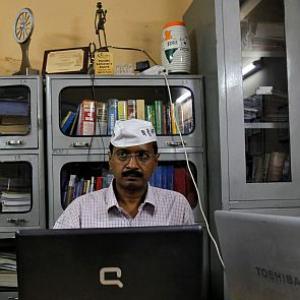 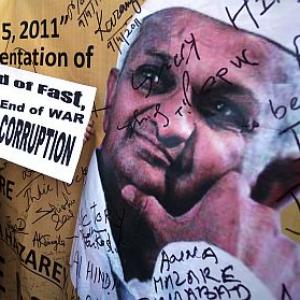