News
Business
Movies
Sports
Cricket
Get Ahead
Money Tips
Shopping
Sign in  |  Create a Rediffmail account
Rediff.com  » News » Anger is the enemy within us

Anger is the enemy within us

'Fear of the Other stalks our lives as it did in ancient times and the mobs are just as easy to incite as it was then,' says Arundhuti Dasgupta.
Illustration: Uttam Ghosh/Rediff.com 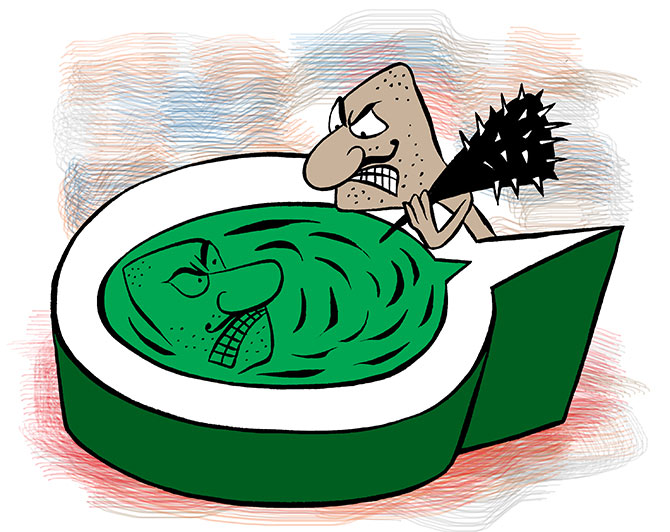 Murderous mobs are on the rampage.

In Dhule, Maharashtra, a family of five was beaten to death; and before that, lynch mobs ran riot in Assam, Tamil Nadu, Tripura, Bengal and Manipur.

Mere suspicion has been enough to get the crowds thirsting for blood, their fury fuelled by false news of child kidnappings, rape or perceived insults to religious affiliations.

At the receiving end of such mindless violence is a group of outsiders -- nomads, tourists, migrant labour and settlers from other regions.

Fear of the Other stalks our lives as it did in ancient times and the mobs are just as easy to incite as it was then.

Greek myth tells us of the maenads, followers of Dionysus who were often roused to fury by the god.

One story goes about his visit to Thebes, which was ruled by Pentheus at the time. The king did not worship Dionysus and did not receive him with the respect due to a god.

Angered, Dionysus is believed to have compelled the women of Thebes to quit their houses and indulge in riotous celebrations on Mount Parnassus.

When the king went after them, the women assaulted him, and his mother Agave, in her Bacchic fury, mistook him for an animal and tore him to pieces.

Mob fury backfired in the Indian tale about Kacha, son of the guru of the gods, Brihaspati.

Kacha was sent to Shukracharya (teacher of the asuras) to learn the art of reviving the dead.

Shukracharya did not turn away Kacha even though he was the son of the enemy.

But the asuras were annoyed with their guru and, in their fury, killed Kacha several times. Each time Shukracharya brought him back to life.

Frustrated by what they saw as their teacher's weakness, the asuras killed Kacha, dissolved his bones and fed them to Shukracharya.

However, Shukracharya's daughter Devayani was in love with Kacha and begged her father to bring him back.

When the guru tried to do that he found Kacha in his stomach. And thus, much against his own wishes, he taught him the secret mantra so that Kacha upon coming out of his guru's stomach, could revive Shukracharya.

Myths also show that mob fury is often driven by a fear of the Other.

One such story is about Babir, told by the Gavlis of Maharashtra.

Babir was born to a tribe of cowherds. His mother had wrested a special boon from Shiva so that she could bear a son.

Shiva gave her a choice: She could have a son who would be wise and brave but only live till he was 12 or one who was stupid but endowed with a long life.

Much to the god's chagrin, she chose the wise one. Shiva tried hard to convince her otherwise and, finally, left with no choice, he decided to be born as her son.

Babir grew up a gifted flute player. At age 12, he was out in the fields when his cows strayed into the fields of another tribe, the Ramoshis.

Angered, the Ramoshis tried to steal his cows but when Babir played his flute, the cows always returned to him.

The Ramoshis killed him and stuffed his body into a porcupine's den. The spot immediately turned holy and sprouted a neem tree.

That night, Babir's mother had a dream. Her son came to her and pointed out the spot where he had been left to die.

That spot was then turned into a shrine for Shiva who protects the community, especially the poor and helpless.

The story is open to multiple interpretations. Babir's shows just how the fear of outsiders usurping one's wealth could trigger violent inter-tribe wars, his killing by the entire clan a grim indicator of the legacy of mob fury that we have inherited and the association with Shiva, a reminder of how majoritarian cultures absorbed minor local gods.

Social harmony has been a hard-fought battle and its principles of liberty, goodwill and humanism are always changing.

John Stuart Mill, in his essay On Liberty, wrote how the meaning of liberty has changed over time.

When the role of a ruler changed, from being the master of his people to their servant (or watchman, as our prime minister has famously pointed out), it brought forth a new threat to liberty: The tyranny of the majority.

Majoritarian policies do the most damage when they fuel anger against the Other -- be it for the food they eat, the clothes they wear or the gods they follow.

As Yudhishthira told the yaksha in one of the most memorable passages from the Mahabharata, anger is the invincible enemy within us.

Unfortunately, we are still under its thumb.