An Indian in America

'As I became a citizen of the United States of America, I knew I was supposed to be shedding my Indian citizenship, but at the end of the day, Mera dil hai Hindustani,’ says Roopa Unnikrishnan, Rhodes Scholar, Commonwealth Gold Medalist and Arjuna Award winner. 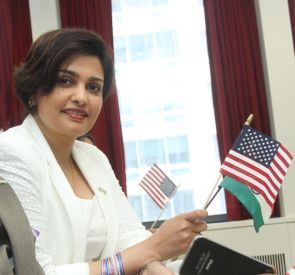 As I typed that title, I realised that more than anything, I’m an Indian in New York. The right wing likes to demonise New York City as different from the rest of the United States, and it’s hard to disagree. It’s American in its essence -- independent, market-oriented, uncaring of where you came from and why. But on the other hand, the pace, culture, sophistication can make it seem continents away from small-town America. And I guess that’s why I love it.

I arrived in New York in March 1999. It had been a long road from the inspiration that hit me when I had an eight-hour layover en route to Oxford, after visiting my sister in Chicago. I landed in JFK, took the bus out to the city and walked along Madison Avenue, staring up at the immense buildings and experiencing my own version of Manhattanhenge.

As luck would have it, a close friend at Oxford bounced my resume onto his network, and the next time I was in the US for a rifle-shooting World Cup tournament, I was interviewed and offered a job in consulting. Then came the arduous process of finishing up my MBA at Oxford and the months of waiting in Chennai for my H1B.

My decade-and-a-half in the US have been full of professional and personal growth and evolution. At work, I have come full circle, having started in consulting, gone into strategy, innovation and talent roles at Citi, Pfizer and BlackRock and now having established my own consulting firm, Center10 Consulting.

On the personal front, my husband and I joke that I had to fly half-way across the world to land up meeting and marrying a guy whose hometown is just a drive away from my family’s home town (my family is from Kannur and his from Thiruvananthapuram, both in Kerala.)

We met because I wanted to get to know the city and culture of this new place I called home. And in the first month of landing, a disparate group of people -- uncles and aunts in India and the US, colleagues at our small start-up consulting firm, new friends I made window-shopping at Saks Fifth Avenue - kept bringing him up as someone I should meet.

After a first date at Tom’s Restaurant of Seinfield and Suzanne Vega fame, where we spent hours over giant milkshakes, we headed pretty fast to a huge Indian wedding at the Indian ambassador’s residence in DC. Fourteen years later, we have 10-year-old twins and continue to surprise and delight each other daily.

I have left some things behind....

I was India’s top woman rifle-shooter, winning multiple national and international medals. My Commonwealth Games record still holds -- I won gold at the Vancouver Commonwealth Games, and have South Asian and Asian plaudits to my name.

1999 was the year I moved to the US, met Sree, but also the year I won the Arjuna Award, India’s highest honor for sportspeople. I continued shooting while here, but it’s not the same -- shooting in a small underground range in midtown Manhattan. And once the kids came along, the hours of daily practice just didn’t stack up on my list of priorities.

Besides, this country’s troubling relationship with guns means that telling people you were a markswoman might make them think you are a fierce defender of the Second Amendment. As someone who has shot in more than 15 countries, I firmly believe in the importance of gun control, regulation and legislation.

I haven’t ruled out a return to sports, if only as coach to one of my kids if they build on their inherent sporting abilities.

I've left behind family, including my parents, who helped focus me and keep me optimistic about my future. If it weren’t for them, I couldn’t have kept up the tough sport I’d chosen, wouldn’t have had the books that surrounded me all my life, and wouldn’t have known about the Rhodes Scholarship that took me to Oxford, then on to the US.

My coach, A J Jallaludin, who took it upon himself to coach me for no other reason than that he saw a spark in a young 13-year-old and molded my skills to deliver the gold medals and records that I couldn't have envisioned. But I do get back to India quite often, especially now that I consult for Indian clients -- and each trip gets me out to Chennai and our little place in Nungambakkam where I can have a spot of kaapi and dosa for breakfast.

I’ve left behind my friends, only to rediscover them sprinkled across the US and Canada. Facebook makes sure that around 14 of us found each other in different parts of the continent, and now we meet almost annually for a 'paint-the-town red' kind of weekend.

So, it turns out, nothing really got left behind.

In this age of global footprints, transnational identities, and constant reinvention, you can reach anyone, anything, any memory with a little effort.

As I became a citizen of the United States of America on May 31, I knew I was supposed to be shedding my Indian citizenship, but at the end of the day, Mera dil hai Hindustani.

Roopa Unnikrishnan -- a Rhodes Scholar, winner of a Commonwealth Games gold medal and the Arjuna Award, the Indian government's premier sporting honor -- is a management strategist with her own practice, Center10Consulting. Read her blog at center10thinking.blogspot.com

This column first appeared in India in New York, the weekly newspaper published and recently relaunched by Rediff.com in the New York, New Jersey and Connecticut area.