The world must hang its head in shame for being a mute spectator to the 'cultural holocaust' in Tibet, says Major General Mrinal Suman (retd), who visited Tibet recently. 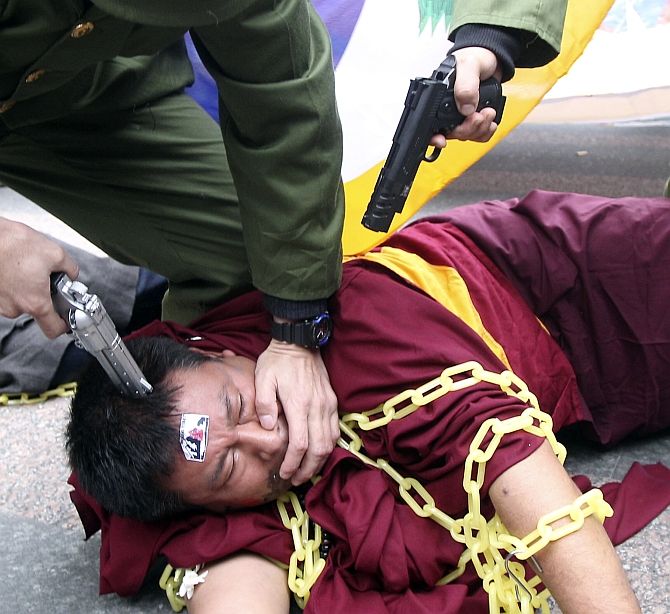 Tibet continues to be an enigma to all visitors. My two visits have been no different.

One sees massive Chinese investment in road and railway infrastructure. Modern skyscrapers are coming up at a frenetic pace to house migrants from the mainland. Yet, Tibet presents a sight of a state under foreign siege.

A deceptive calm hides the underlying tension. There is no cheer in the air.

The story of Tibet is a saga of the world's apathy and indifference to the cultural genocide of Tibetan Buddhism. Brutal decimation of an ancient, rich and peace-loving culture by ruthless China has been ignored nonchalantly.

China annexed Tibet in 1950. Although the estimates vary considerably, it is believed that up to one million Tibetan natives have been killed by the Chinese to suppress their demand for freedom.

As the Tibetans are highly religious by nature, the Chinese have methodically targeted their places of worship and learning with a vengeance.

Over 6,000 monasteries have been destroyed or ransacked. Damage done to Tibet's relics, heritage and architecture has been truly horrendous; and beyond redemption.

Tibet has been amalgamated in China as the Tibet Autonomous Region. It is autonomous only in name; the Chinese government exercises total and unbridled control. The locals have no say.

Even though TAR has an ethnic Tibetan as the chairman, he is only a titular figure. He is subordinate to the branch secretary of the Communist Party of China (the real power wielder) and he is always from the Chinese mainland.

Wu Yingjie, a hard-nosed Han Chinese from Eastern China, is the current appointee.

There is minimal interaction between the Chinese and the natives. The Chinese behave like the rulers and treat the natives with disdain.

The Hans from mainland China occupy all senior government posts and are running prosperous businesses. They enjoy a much higher standard of living and strut around like rulers, demonstrating all the trappings of an occupation force.

On the other hand, the Tibetans are treated with suspicion and have been condemned to menial jobs. Their condition is worse than that of the slaves of the olden days. All janitors, sweepers, load carriers and labourers are Tibetans. Some manage public toilets to make a living. Many peddle in local stones and other produce.

It is sad to see a once-proud community degraded to the status of bonded labour. Poverty continues to afflict most. 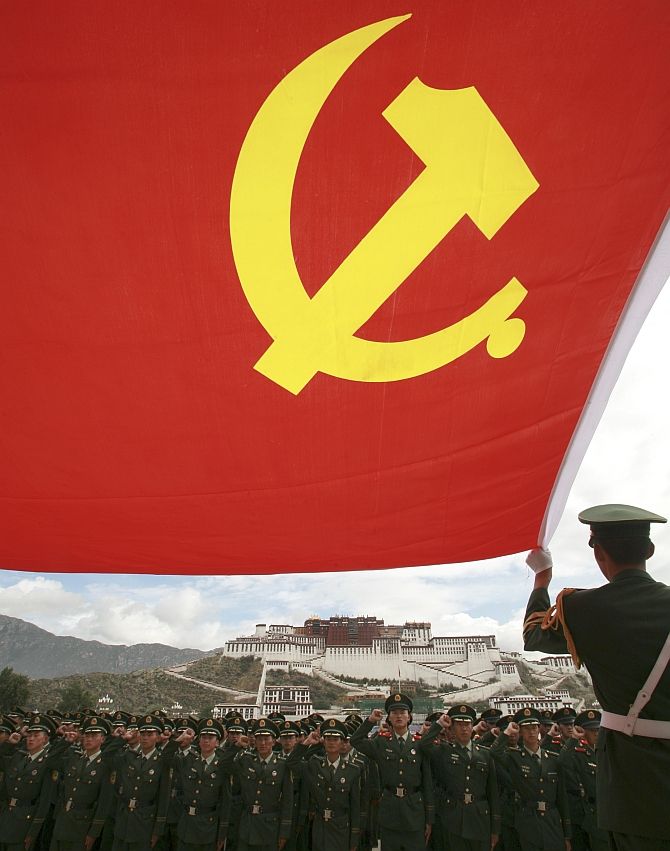 IMAGE: Policemen review the oath that they took when they joined the Communist Party of China in front of the Potala Palace in Lhasa, Tibet. Photograph: China Daily/Reuters

Despite 66 years of occupation, China has not been able to crush the Tibetan spirit for independence.

On the contrary, grave atrocities committed through political and religious repression have strengthened their resolve further.

The Tibetans abhor the Chinese and the Chinese know it. The Chinese sense of insecurity is evident from the fact that Google, Facebook, WhatsApp and such other social media have been banned in Tibet. Here are some other indicators:

Although the Tibetans are wary of expressing their views openly, they never fail to express their gratitude to India for giving asylum to their temporal head and millions of other Tibetan refugees.

A middle-aged woman vendor shoved a handful of walnuts in our hand, as if to say 'thank you'. 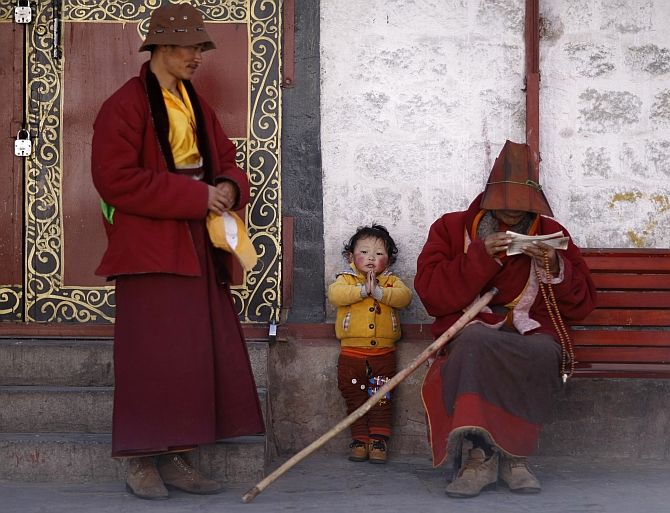 IMAGE: A boy puts his palms together as he rests with his family outside the Jokhang monastery in Lhasa. Photograph: Jacky Chen/Reuters

Traditionally, the Panchen Lama is considered second to the Dalai Lama in hierarchy and plays a critical role in selecting the next Dalai Lama.

After the escape of the current Dalai Lama to India in 1959, Panchen Lama Choekyi Gyaltsen sided with Communist China and supported the suppression of the 1959 rebellion. However, by 1962, he was a disillusioned man and accused China of smothering Tibetan culture.

He was imprisoned in 1964 and subsequently kept under house arrest. He died suddenly under mysterious circumstances at Shigatse in 1989. He was only 51 years old. Locals are convinced that he was poisoned by the Chinese.

A boy named Gedhun Choekyi Nyima was chosen to be the next Panchen Lama by the Dalai Lama and the then-incumbent abbot of Shigatse's Tashilhunpo monastery. However, the boy went missing soon after his nomination and is untraced to date. It is alleged that he is still being held in captivity at an unknown location in China.

In his place, the Chinese government conspired to select Gyaincain Norbu (son of two Communist Party members) as the 11th Panchen Lama. Most Tibetans do not recognise Norbu as the Panchen Lama and consider him to be a stooge of the Chinese.

Although the Panchen Lama traditionally lived in his official seat at the Tashilhunpo monastery in Shigatse, Norbu has chosen to reside in Beijing.

Hatred for him amongst the Tibetans is so intense that whenever he visits Shigatse, the city is converted into a police fortress to ensure his security. Locals are coerced to send two persons per family to attend his public addresses and are even paid money for the same.

Non-attendance is viewed seriously and can even invite police action. 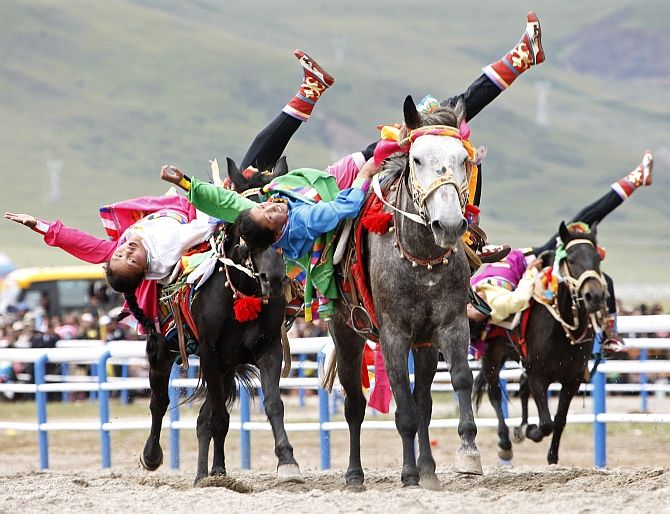 China has been adopting a three pronged approach to ensure the total integration of Tibet -- demographic offensive, obliteration of Tibetan identity and undermining the standing of the Dalai Lama.

The Tibetan population consists of three broad ethnic groups -- nomads, agriculturists and urban dwellers. Whereas the demographic make-up of the first two groups remains largely undisturbed, it is the third ethnic group that is undergoing a worrisome change with the massive influx of Chinese migrants.

The Chinese government considers demographic swamping to be the ultimate solution. It is feared that the Han population will overwhelm the locals in the next two decades.

As the Chinese consider the knowledge of Mandarin to be essential for building national cohesion, the Tibetans are compelled to learn Mandarin. As a result, the local Tibetan language is being allowed to die.

Secondly, having failed to crush the ethnic pride of the Tibetans, China has been systematically targeting symbols of Tibetan uniqueness.

Recent demolitions at the Larung Gar Buddhist Academy and the Jhada Gon Palden Khachoe Nunnery are symptomatic of the Chinese efforts to subvert the local culture.

Larung Gar is said to be the biggest Tibetan Buddhist institute (academy and monastery) in the world and is keeping Buddhist knowledge alive. Under the garb of decongesting, it is attempting to curtail its influence.

Finally, as regards the Dalai Lama, the Chinese government suffers from acute phobia. It has forbidden referring to him as His Holiness. However, for the Tibetans, His Holiness the Dalai Lama continues to be the supreme head. They hold him in great esteem.

When told that we were from India, a young hotel boy told us that his sole ambition in life was to visit India to pay respects to His Holiness. With moist eyes, he rued his helplessness to acquire a passport.

Having failed to win over the 80-year-old Dalai Lama, China is waiting for his demise to install a pro-China boy as the next Dalai Lama. It has already started manoeuvring itself to be in a position to have its say.

Support of the lackey Panchen Lama will help considerably.

As per China's past track record, if the followers of the current Dalai Lama select a boy living in Tibet, he will be eliminated by China and replaced by a loyalist boy.

With the support of a pliable Dalai Lama, China will tighten its grip over the religious and spiritual facets of Tibetan culture further. That shall prove to be the final and fatal blow.

A rich culture will soon get wiped out and lost forever. Ominous signs are already discernible.

The world must hang its head in shame for being a mute spectator to the 'cultural holocaust' in Tibet. 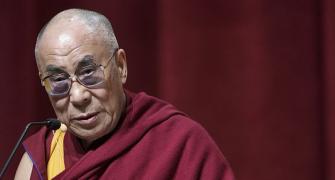