News
Business
Movies
Sports
Cricket
Get Ahead
Money Tips
Shopping
Sign in  |  Create a Rediffmail account
Rediff.com  » News » Chinese Chequers on LAC is Not for the Faint-hearted

The Indian Army has shown it can face down the PLA, but is too often held back by a political leadership that lacks boldness, asserts Ajai Shukla. Recently, China's President Xi Jinping made a three-day visit to Tibet, his first as general secretary of the Chinese Communist Party. Featuring prominently in his programme was the Tibetan town of Nyingtri (Nyingchi or Linzhi in Chinese), which is of strategic interest to India. Beijing claims that what India calls Arunachal Pradesh is actually Southern Tibet, a part of Nyingtri prefecture.

Nyingtri is a key crossroads in Beijing's plan to connect Tibet with China's bustling Sichuan province. This would promote tourism and trade; Tibet had 32 million arrivals in the first nine months of 2020, despite the pandemic.

It is also central to Beijing's plan to connect the remote areas bordering India and to build massive dams on the Yarlung Tsangpo river system to generate hydropower.

China's 14th Plan includes the production of a large dam in Nyingtri, which would produce electricity for uses such as powering the electrified, high-speed, double track railway between Lhasa and Chengdu, Sichuan's capital.

Beijing has paid sustained strategic attention to this area over the preceding decade. Twelve years ago, Medok county (or Beyul Pemako), a part of Nyingtri prefecture, was China's last county unconnected by road.

This splendid isolation ended when a road was pushed through to Medok from Bome county to the north, through a three-kilometre tunnel through the Himalayas.

In May, Xinhua reported the completion of a new highway from Nyingtri to Medok that cuts across the gorge of the Yarlung Tsangpo -- the world's deepest canyon with a maximum depth of 6,000 metres.

This spectacular, 67 kilometre-long road, which took seven years to build, goes on towards the Indian border at Gelling, in Upper Siang district of Arunachal Pradesh, where the Yarlung Tsangpo flows into India as the Siang river.

It shortens the distance from Nyingtri to Medok from 346 kilometres to 180 kilometres, and cuts travel time by eight hours.

Meanwhile, India's ineffectual efforts at building border roads across Arunachal Pradesh -- from the Subansiri to the Dibang river valleys -- leave our military there in the same disadvantageous position that it found itself in Ladakh last year when Chinese troops drove into the Depsang, Galwan, Hot Spring, Pangong Tso sectors.

In Tibet, as in Ladakh, China has ensured that it will enjoy the initiative in building up forces and logistics, leaving India scrambling to react.

From Nyingtri, Xi travelled on the new railway to Lhasa, on a 435-kilometre section that had been inaugurated just a month earlier. The 1,200 kilometre uphill section from Chengdu to Nyingtri is expected to be ready by 2030.

His messaging to his army was direct and clear: Dominate the border with India!

The PLA has, in many ways, been doing exactly that since the 1962 War with India. However, since the late 1990s, the Chinese military has sharpened this strategy.

Recent writings by noted Tibetologists -- Robert Barnett, Matthew Akester and others -- have described how China has implemented its cynical strategy.

In an imperial project, driven from Beijing, CCP apparatchiks in Tibet's borderlands have been tasked to coerce border villagers, most of them simple yak herders, to occupy disputed border areas, usually high pasturelands, thereby solidifying China's territorial claims along the still disputed boundary with India and Bhutan and strengthening Beijing’s geo-political position.

By implementing multiple intrusions across the disputed borders, Beijing has created what Barnett describes as 'a vast network of quasi-militarised settlements along -- and sometimes across -- China's Himalayan borders.'

Barnett details the case of four Tibetan nomads from the remote Beyul Khenpajong region, disputed between Bhutan and China. Until 1995, like so many border yak graziers, the four grazed their herds in the Beyul, returning to their village in Tibet when the winter snows closed in.

But in 1995, the local CCP officials told them that the Beyul was Chinese territory and that it was their duty to guard it through physically remaining there through winter.

For the next 20 years, the four graziers wintered in alone in the Beyul, in the most primitive conditions and with no contact with the outside world.

Each summer, the CCP officials would organise the herders to carry out small tasks to remind Bhutan of China's claims.

Barnett writes: 'These included driving yak herds over land grazed by Bhutanese herders in the Beyul, demanding tax payments from the Bhutanese herders, planting Chinese flags on peaks and painting the word 'China' on rocks throughout the area.'

In the face of this sustained pressure and without any support from their own army or government, the Bhutanese herders moved away, abandoning their traditional grazing grounds.

Interestingly, China's real intentions in the Beyul were directed at India; it had no desire to keep the land in Beyul.

Instead, Beijing's eyes were fixed on pockets of territory on Bhutan's western borders -- especially Dokalam, from where the PLA could pose a military threat to India's Siliguri corridor.

When Bhutan, committed by a 2007 treaty to respect India's national security interests, declined Beijing's so-called package deal, China stepped up the pressure by beginning road construction in the Beyul in 2015.

By October 2018, China had completed the construction of Gyalaphug, an entire village in the Beyul.

Other villages and infrastructure followed as an estimated 250,000 Tibetans were resettled thus in vulnerable pockets along the border.

Ironically, the four nomads who Beijing had sent to winter for 20 years without food or shelter are now enjoying modern housing, electricity and the full spectrum of support from China's governmental system.

China plays this game across the Line of Actual Control with India, supporting its own graziers and threatening India's, even beating up Indian graziers on occasion.

The area across the Indus at Dungti, near Demchok in Southern Ladakh, which is claimed by India, is no longer visited by Ladakhi herders after several were beaten up by Chinese border guards.

An uneasy game of push and shove is played between graziers from both sides in the Namka Chu valley near Tawang.

The Indian Army has reacted on only two occasions -- in 1986, at the Wangdung grazing ground near Tawang; and in 2017, when a bold Indian army commander sent troops into Bhutanese territory at Dokalam to physically block the Chinese.

Playing Chinese Chequers on the LAC is not for the faint-hearted.

The Indian Army has shown it can face down the PLA, but is too often held back by a political leadership that lacks boldness.

We must ensure that the frontline custodians of our frontiers, whether soldiers or civilians, never have to face the Chinese from a position of disadvantage. 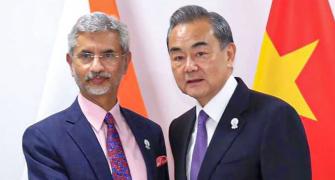 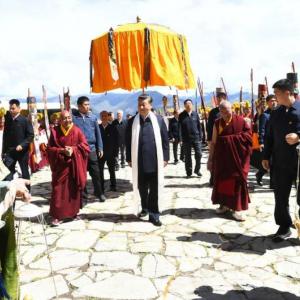