Agni 5 -- going ballistic over a missile

By Sushant Sareen
Last updated on: April 20, 2012 11:14 IST
If India's nuclear and missile capability before Agni-5 was not enough to deter China, then it is unlikely that Agni-5 will, argues Sushant Sareen

The successful test of the 5000-km, solid-fuelled, cannisterised IRBM Agni-5 missile is without doubt a significant milestone in enhancing not just India's defence posture but also its strategic outreach. But even as the nation savours the success of the ballistic missile test, it is important that the country doesn't go ballistic over it. While Agni-5 certainly catapults India into a very select club of countries with such a capability, the membership of this club entails onerous responsibilities and adds layers of complexities to the strategic and security doctrine of India.

Quite frankly, if India was to just stop indulging in unnecessary chest-thumping for a little while and sit back and contemplate on how well it has coped with the strategic challenges until now, it would realise that technological prowess constitutes only one part of the overall strategic and security setting in which India operates.

In other words, technology is a necessary but not sufficient condition for achieving strategic objectives and countering security threats. The real lacunae in India's strategic and security posture is not so much technology related as it is the ability of the Indian State to project its power and resolve to use this technology for effectively deterring any and every hostile action against it.

The real value of the Agni-5 missile lies in the fact that it extends India's ability to target the eastern seaboard of China. This means that important Chinese centres like Beijing and Shanghai now fall within the range of Indian missiles. To the extent that this capability gives India a degree of strategic parity with China and thereby contributes to strategic stability between the two Asian giants, it needs to be welcomed.

But look at it another way and questions start to arise on whether the induction of Agni-5, which is still a couple of years away, will actually lend strategic stability and put in place a credible deterrence.

While it is certainly a no-brainer that both these cities will fall in the category of unacceptable damage, more so if such damage is caused by India, it is unlikely that China would be blasé about an Indian strike on other large population centres and economic hubs, something that fell within the striking range of Indian   missiles even before testing of the Agni-5.

It is in this sense that the Agni-5 isn't quite the game-changer it is being made out to be, and won't be until India's nuclear posture acquires a level of credibility, which it doesn't currently. Not to belabour the point, but if India's nuclear and missile capability before Agni-5 was not enough to deter China, then it is unlikely that Agni-5 will.

Deterrence ultimately is a state of the mind and is as much psychological as it is technological. For deterrence to work, the other side must be convinced of not just your capability but also your intent and resoluteness to use your weapons. Unfortunately, partly because of India's namby-pamby 'no-first use' nuclear doctrine and partly because of the general impression of Indian political leadership being incapable of taking hard decisions, India's deterrence capability is not taken very seriously by the two countries -- Pakistan and China -- against which much of our deterrence is directed.

Conversely, both these countries have successfully managed to use their own deterrence capability against India. Take, for instance, Pakistan. Ever since Pakistan first went public with its nuclear capability -- in 1987 when it used an Indian journalist to announce that it possessed nuclear weapons -- it has convinced (some would argue bluffed) India that it will actually have no hesitation in using its nuclear weapons to counter any Indian thrust into Pakistan.

With full-scale conventional war being taken out of the equation, India tried to come up with the concept of a limited war, which according to some Indian strategists was possible under a nuclear overhang. But Pakistan has now tried to counter this as well by threatening to use tactical nuclear weapons against any Indian integrated battle group -- the Cold Start doctrine -- that enters Pakistani territory.

Keeping before them the experience of Nato which found the doctrine of overwhelming retaliation to be unworkable, the Pakistanis see the Indian doctrine of retaliating with overwhelming force against use of tactical nuclear weapons as lacking in credibility. More importantly, after having convinced India of its robust deterrence, Pakistan has used its nuclear umbrella to continue waging proxy war against India.

China too doesn't seem particularly impressed by India's nuclear posture and that is the reason why it continues to pin-prick India through intrusions along the borders, feels confident in browbeating Indian ventures in the South China sea, carries out threatening military manoeuvres on the Arunachal border etc. Part of the problem lies in the obtuseness of India's nuclear posture. This means that the red lines which would trigger a response from India that would impose an unbearable and unacceptable cost on the adversary have not been clearly laid down.

While doctrinal ambiguity does serve a purpose in certain situations, it is clearly not serving any purpose as far as India is concerned. Another problem is the Indian cultural trait of ducking decisions, especially on something as monumental as exercising the nuclear option. In a sense, by absolving the Indian political leadership of having to initiate this very hard decision (which because of NFU will be taken for India by its adversary), NFU suits the cultural traits of the Indian leadership.

But on the flip side, the NFU degrades the potency of the nuclear deterrence. After all, if India is really serious about adhering to NFU, then at what stage of a conventional conflict, with say China, will it decide to use the nuclear option? Will India keep its arsenal mothballed if Arunachal falls? Will India discard NFU if Guwahati is threatened? Or will it continue to stick to NFU even if Kolkata falls?

The idea is not to indulge in nuclear war-mongering; rather it is to make India's deterrence so effective that war (whether limited, all-out, proxy whatever) is no longer an option for either India's western neighbour or India's north-eastern neighbour. In the case of the latter, both India and China stand to gain a lot more by engaging in close economic and even political cooperation than in confronting each other. But for this to happen, strategic stability needs to be ensured so that neither side gets any wrong ideas and both sides desist from needless adventurism.

While Agni-5 will certainly contribute to such stability, India needs to understand that this missile will not make a whit of a difference unless India is able to tweak its nuclear doctrine and make it more robust, convincing and credible. This, more than anything else, is the real strategic challenge for India in the years to come. 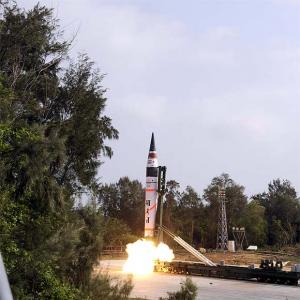 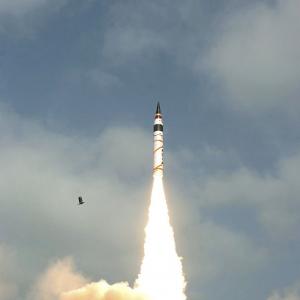 PIX: 'Production of Agni V to begin in a year's time'