'The setback for Trump carries a message not only for him, but for the far right in general,' says Amulya Ganguli. 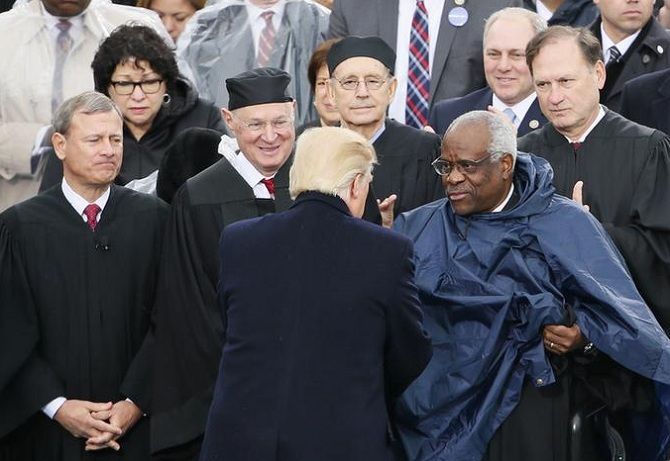 The new buzzword may well be 'it's politics, stupid' in line with the similar campaign rhetoric of the then soon to be United States president Bill Clinton in 1992.

Then, the focus was on the economy.

Now, as US President Donald Trump has responded to the judicial rejection of his travel ban orders on seven Muslim countries by describing the judges as being 'so political', it is obvious that a new criterion has come into play.

His ire has been provoked by the difference in the perception of the judges and of his own.

While the former have taken their stand against the travel ban on the basis of the law, which upholds a non-discriminatory approach motivated by an inclusive, compassionate outlook, the US president is driven by an antagonistic sectarianism, which is typical of the philosophy of the far right.

The pro-white, pro-Christian, anti-immigrant stance of this group is central not only to the Alt-Right parties of Europe, such as Marine Le Pen's National Party in France, Geert Wilders' Party for Freedom in The Netherlands or Norbert Hofer's Austrian Freedom Party, but also the modified Republican Party under Trump in the US.

While the European far right is yet to face any judicial challenge, Trump has had the first taste of how his views may appear to a non-partisan person.

Till now, the rightists have tended to scoff at the gentle and kindly Left Liberals whose patriotism was in doubt because of their partiality towards civil liberties rather than on what the rightists perceive as the national interest.

It is not only among the far right in the US and Europe that such views prevail, but also in India where the BJP asserted that whoever did not chant 'Bharat Mata ki Jai' did not deserve to live in the country.

One reason for the brashness of the rightists is the one-sided rants in support of their partisan views by their sympathisers on social media.

These diatribes have led to much of the mainstream media being characterised by the vituperative term, presstitutes, coined by the saffron brotherhood.

Trump, too, has been excoriating the media for purveying 'fake' news.

Even the judiciary has come under attack in India with saffron netizens blaming the judges for pronouncing against jallikattu, the bull-taming sport in Tamil Nadu, for inflicting pain on the animals; the use of firecrackers during Diwali for causing pollution; and reducing the height of human 'pyramids' during the Dahi Handi festival on the occasion of Janmastami, Lord Krishna's birthday, in Maharashtra to prevent accidents.

It is now the same in the US with Trump detecting a political bias in the verdicts against the travel ban.

However, if 'The Donald,' as his second wife used to call him, has desisted from taking his case for saving the nation from terrorists to the supreme court, considering a new immigration ban instead, the reason perhaps is that he is unwilling to widen the area of confrontation with his perceived and imaginary adversaries.

He is also probably scared that if the supreme court sides with the lower courts on the issue, then that will be the end of the road for him on travel bans.

It is one thing to take on The New York Times and quite another to engage in a running battle with the judiciary, especially when some of the judges who ruled against the ban were appointed by Republican presidents. 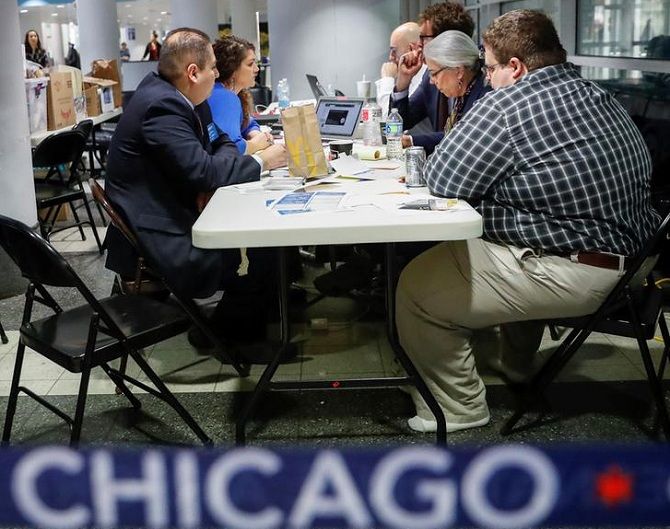 The setback for Trump carries a message not only for him, but for the far right in general.

If the judiciary is seen to be in tune with the mainstream media's refusal to accept the far right's antipathy towards people because of their ethnicity or colour or creed, then the current ascendancy of the Alt-Right will be stymied.

For the judiciary will have endorsed, like the 'media workers' -- another term used by the saffron lobby for presstitutes -- the old-fashioned concept of a secular and humane polity that shuns prejudice and ensures that there is a fair law for everyone.

As a result, the far right with its agenda of fomenting hate against the perceived outsider will have to retreat to the margins of society where they were confined to earlier -- till the discontents of globalisation in the 'advanced' countries caused by open borders and technological innovations enabled them to rear their heads.

If Trump stumbles, then the Le Pens and Geert Wilders will also falter, ensuring the retreat of the 'meaner, harsher' world, which was feared by Barack Obama, as good sense and the virtues of decency return to the international scene.

MUST READ: On the frontline of the battle for immigrant rights 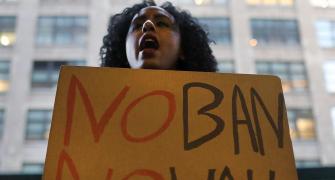 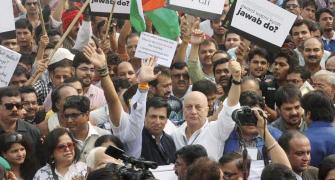 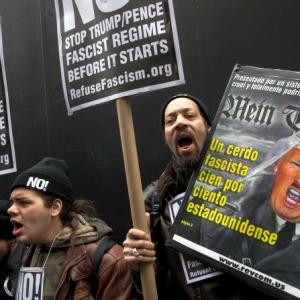