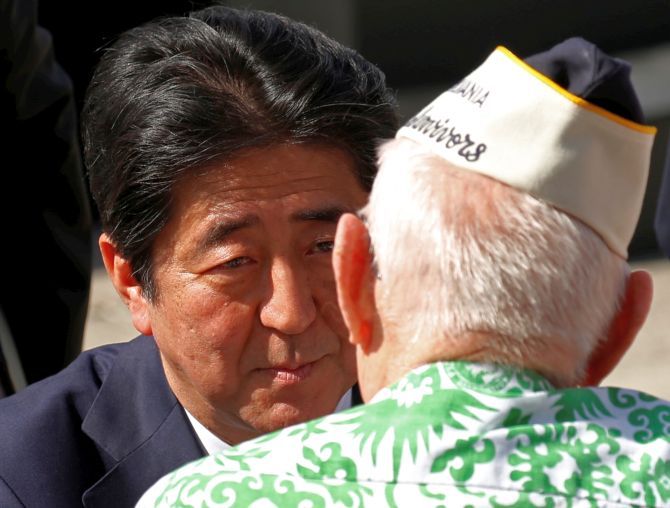 The Japanese prime minister's visit, to the spot that was bombed 75 years ago, shows that it is possible for former enemies to transcend recriminatory impulses, observes Rajaram Panda. 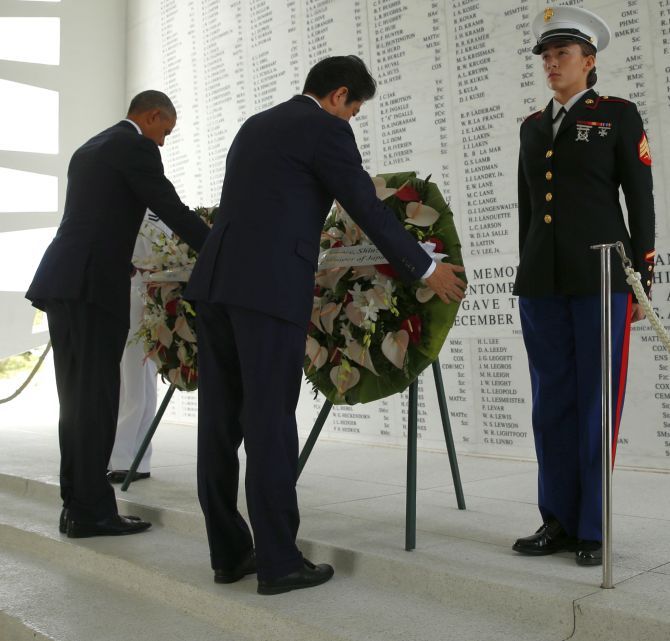 After his attempt to achieve reconciliation with Russia by meeting President Vladimir Putin at his hometown in the Yamaguchi prefecture and choosing an onsen (hot spring) as the site, Japanese Prime Minister Shinzo Abe made another attempt to heal the historical wounds with the United States by visiting Pearl Harbour, which Japan bombed 75 years ago, leading to America's involvement in World War II.

Abe also partly succeeded in reaching out to South Korea in dealing with the 'comfort women' issue and having a summit meeting with President Park Geun-hye. The latter two attempts now run the risk of floundering as US President Barack Obama demits office on January 20 to be succeeded by the maverick Donald Trump whose foreign policy stances are uncertain at the moment and Park being impeached and her country embroiled in domestic scandal.

Even with Russia, the outcome was not anything tangible that could lead to the signing of a peace treaty. What was important was the opening up of the door for dialogue for the first time. The road ahead towards real reconciliation could be bumpy.

Here, let me dwell a bit on the significance of Abe's Pearl Harbour visit and what it means in the context of Japan-US relations and beyond.

The first impression is that the visit is more important for its symbolism than any concrete influence on bilateral relations.

Speaking at the memorial constructed on the hallowed waters above the sunken USS Arizona in Joint Base Pearl Harbour-Hickam on December 27, as part of a ceremony to honour those killed in the Japanese attack on the naval harbour on December 7 1941, Abe offered 'everlasting condolences.'

'As the prime minister of Japan,' Abe said, 'I offer my sincere and everlasting condolences to the souls of those who lost their lives here, as well as to the spirits of all the brave men and women whose lives were taken by a war that commenced in this very place.'

When 300 Japanese fighter planes and bombers attacked Pearl Harbour, 2,300 Americans died and more than 1,000 others were wounded.

After lasting another four years, the war came to an abrupt end when the US dropped atomic bombs in August 1945 that killed some 140,000 people instantaneously in Hiroshima and 70,000 in Nagasaki four days later. The last time an atomic bomb was used.

Threats of its use remain, which is why Obama in Hiroshima in May 2016 and Abe in Pearl Harbour in December 2016 underlined the importance of secure=ing a nuclear-free world. This was the key point in Obama's speech in Prague in April 2008.

It remains to interpretations how much he achieved during his eight years in office. Any neutral assessment would suggest he achieved very little.

IMAGE: Abe speaks with a Pearl Harbour survivor after Obama and he spoke at Joint Base Pearl Harbour-Hickam, Hawaii.

Then Japanese prime minister Shigeru Yoshida visited Pearl Harbour in 1951, six years after Japan surrendered, but that was before the USS Arizona Memorial was built. Yoshida broke journey on his way home from signing the San Francisco peace treaty with the US and others in 1951 and paid a courtesy visit on Admiral Arthur W R Radford.

But did he offer an apology for Japan's past deeds? He did not.

But he expressed the hope that the horrors of that war must never be repeated.

A statement by a Japanese government official prior to the visit said that Abe would not apologise. Chief Cabinet Secretary Yoshihide Suga said the purpose of Abe's visit was to pay his respects for the war dead and not to offer an apology.

Abe remarked that since Obama did not apologise when he visited Hiroshima in May as the first sitting US President to do so, he also did 'not have to apologise at Pearl Harbour.'

So, what it meant was 'strategic diplomacy' and 'symbolic reciprocity,' rather than one involving an apology.

What is important to note is that the leaders of both Japan and the US were ready to deal with the most sensitive aspects of their shared history, which looked impossible before Obama took power eight years ago. IMAGE: 'We must never repeat the horrors of war again,' Abe said. 'This is the solemn vow we the people of Japan have taken.'

Despite the leaders trying to heal the historical wounds, the issue of offering an apology remains a sticking point in either country.

US Navy veterans who survived the Pearl Harbour attack -- what then US President Franklin Delano Roosevelt called a 'date which will live in infamy' -- say there is no need for an apology for bombing Hiroshima and Nagasaki.

In Japan, the majority opinion on Obama's May visit to Hiroshima was that he should have offered apology for the US action.

On the question of the bombing of Pearl Harbour, though the military version carries emotional overtones justifying the attack, the political leadership makes some course correction citing Japan's intent to give prior notice that it was declaring war but could not do so because of 'bureaucratic bungling.'

Would the US perceive Abe's Pearl Harbour visit as making amends for Japan's past act without offering an apology?

Whichever way one may look at the issue, it was a political risk for Abe because of the emotional overtones that persists in Japan.

Nevertheless, it was a historic pilgrimage by Abe and Obama to the sites, demonstrating that two powerful former enemies can transcend recriminatory impulses that weighed down relations after the war.

For Obama, who demits office on January 20, his meeting with Abe was the last time he met with a foreign leader as president. 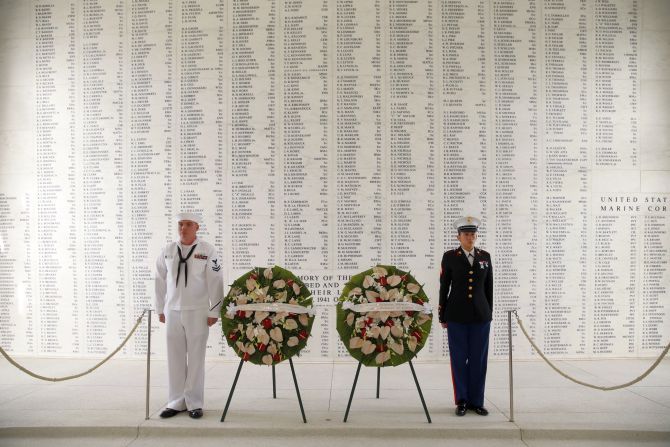 IMAGE: An honour guard at the USS Arizona memorial at Pearl Harbour.

Irrespective of the outcome, if Abe's Pearl Harbour visit is seen as a sign of reconciliation, has Abe achieved the same with Japan's former foes in its neighbourhood, South Korea and China?

As regards South Korea, limited results were reached with Japan agreeing to make payments to the surviving 200-odd 'comfort women' as atonement money. Abe was sincere to have future-oriented relations with allies and therefore reached an agreement with South Korea to provide support measures to former 'comfort women' who were forced to provide sex to imperial Japanese military personnel before and during World War II.

The Korean people, however, felt that a real apology was still missing. The truism is because of the emotive nature which no apology would remove the scar that remains deep.

As regards China, its foreign ministry spokeswoman Hua Chunying remarked, 'Japan can never turn this page over without reconciliation from China and other victimised countries in Asia.'

So, things are complicated.

Since he began his second term as prime minister in December 2012, Abe has attempted to address the issue of history dispassionately so that future generations do not have to retain a sense of guilt and apologise for past actions.

Japan watchers might see Abe's visit as symbolic for the two countries as both have built a strong relationship in the economic and political realms as well as having a security alliance relationship.

What is noteworthy is it took more than seven decades to reach this point.

Therein lies hope so long as the intent is there to achieve mutual prosperity. 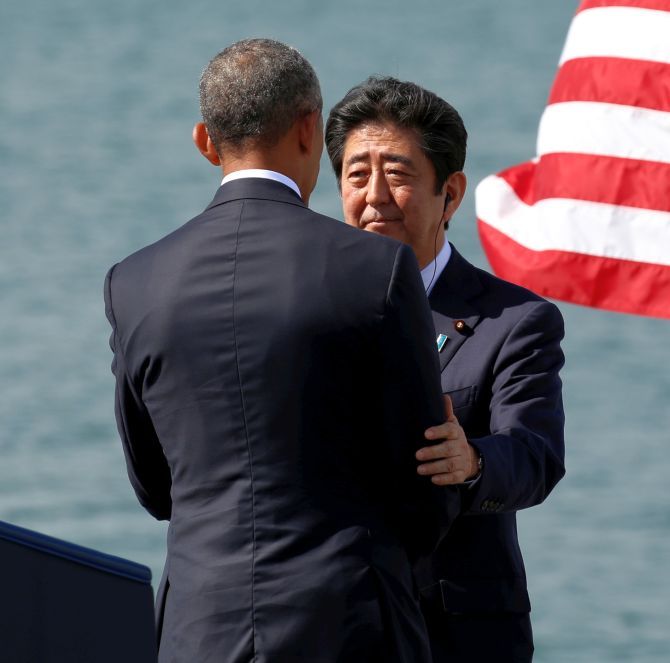 IMAGE: Abe and Obama made a joint pilgrimage to celebrate 'the power of reconciliation.'

There have been several aberrations throughout history.

Some nations emerged as victors and some as losers. There had also been uptrends and reversal of the processes.

In the modern age, one needs to acknowledge this and move on, and not continue to relapse to the past if that suits the current narrative.

It seems incredible that in East Asia, this sort of trend is manifest in several ways, whose effects are only in the negative.

The political leadership is expected to rise above sectarian interests and build an environment in which humanity as a whole enjoy life on a level playing field.

There might not be immediate dividends visible in Obama's Hiroshima visit and Abe's Pearl Harbour visit, but the reconciliation process needs to be seen as a positive start, though there always is a greater distance to cover.

Indeed, the power of reconciliation of historical wounds can have its spillover effect to shape and influence other aspects of relationships and from that point of view, the two visits shall leave their imprints in the future course of relations between Japan and the US.

The benefits of reconciliation, however, cannot be measured in black and white. By visiting Pearl Harbour, Abe was demonstrating to the world how important the relations with the US for Japan are and therefore historical aberration ought to be set aside.

The present robust relationship between the two nations is a testimony to this realisation and therefore crafting of policy by one towards the other. Therefore, the visits are beyond symbolism and their aims are deeper than what appears on the surface.

It remains unclear if the same sentiments shall be sustained after Donald Trump assumes office. He has made the outlandish suggestion that Japan and South Korea should obtain nuclear weapons so that the US would no longer be burdened with the costs of defending them.

This single statement not only caused considerable disquiet in the Asian capitals, the reconciliation process itself shall come under severe test under a Trump presidency.

Dr Rajaram Panda is currently the ICCR India Chair Visiting Professor at Reitaku University, Japan.
The views expressed are Dr Panda's own and do not represent either the Indian Council for Cultural Relations or the Government of India. 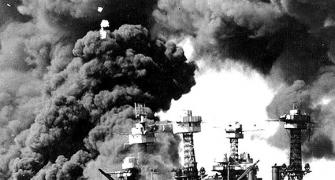 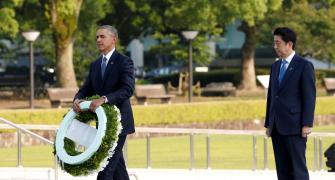 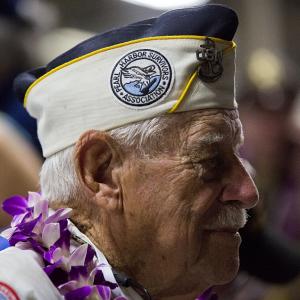