Not only is Modi's India not the shining land of dynamism and prosperity that he promised -- though it may be that, for some people, in a few years from now -- but socially it has the positively regressive tendencies that were entirely predictable. Mitali Saran analyses. 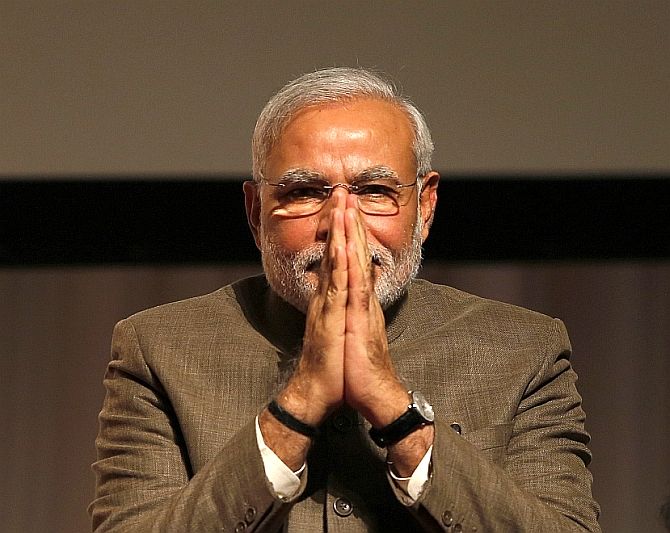 One year after the Modi government romped to power on a development platform that came with Hindutva and lots of hyper-nationalistic bumf quite visibly poking out from the undercarriage, it has done a terrific job of looking both puffed-up and retrograde at the same time.

There was the triumphalist chest-beating at Madison Square Garden.

There was that cringe-inducing business with The Suit.

There was turning Christmas into Good Governance Day.

There was all the spiteful overt communalism, like that of MP Yogi Adityanath in Parliament, which went unanswered by the administration.

There was the clumsy attempt to take credit for lowered oil prices.

There was paranoia about NGO and foreign accounts, and an outrageous ban on a Greenpeace worker's travel abroad.

There was the remark in Toronto about turning "scam India into skill India".

There was the tweet that claimed to have informed the prime minister of Nepal of the catastrophic earthquake there.

There were attacks on churches, riots in Trilokpuri and ghar wapsi.

But while poor judgement and bigotry is awful, it has always been around regardless of political dispensation, and always will be.

These events are like breakouts of political acne -- ugly and annoying, but localised and self-limiting.

What is really going to hurt India, while we are busy worrying about her zits, is the stuff that is being injected into her veins.

There's the legislative route. In an age when social mores increasingly favour long-term empowerment, education and individual rights and well-being, the finance minister made cuts in the Union Budget's allocation for women and children, health and education.

The Lok Sabha, with its brute majority, has just amended the Juvenile Justice Act, so that ever-younger kids can be tried as adults for "grievous crimes", which one imagines is easier than focusing on fixing the squalid juvenile justice rehabilitation system as it currently stands.

The whistle-blowers Act remains unimplemented, while officials consider whether to limit its scope on grounds of "national security".

The government has sent mixed signals, at best, on the regressive Supreme Court judgment on Section 377, which criminalises "sex against the order of nature".

The government has made a U-turn from its previous dissenting stand on bringing political parties under the ambit of the Right to Information Act -- one of the shining legacies of the ill-starred United Progressive Alliance-II -- and now intends to exempt them after all.

Activists say that it has more or less ceased to respond to RTI requests, which constitute one of the most empowering tools available to the ordinary citizen.

Other Bills inherited from the UPA are being reshaped, including the land acquisition Bill, from which the Bharatiya Janata Party wishes to withdraw the consent clause.

That attempted amendment has put the BJP decisively on the back foot against an opposition rallying around a newly proactive Congress.

And there is the far more insidious route.

Institutions like the Lalit Kala Akademi, the National Museum and the Crafts Museum are being re-staffed in one way or another.

Critical posts like the central information commissioner, responsible for implementing the RTI, are simply lying vacant; Rashtriya Swayamsevak Sangh-backed individuals are being brought in to staff educational institutions; and textbooks are being rewritten to reflect crazy Hindutva fantasies.

The natural fissures among communities are being deepened -- Muslims are encouraged to either move away to live among Muslims, or preferably never move in at all; if not by force, then by overt and intimidating request.

The police not just refuse to protect individuals (for example, writers like Perumal Murugan), but actively encourage them to put their heads down and comply with social conventions.

Anyone who thought that the Modi government would be more committed to modernising and developing India than homogenising its society must also believe in unicorns, fairies and Santa Claus. (It turns out that these people were legion.)

Now, as the rupee plummets and expectant businessmen start to tap their feet and look annoyed, as criticism begins to swell, as red tape persists and the dream fades around our ears, the one-year anniversary of the Modi government can only be called a damp squib.

It is perhaps a mark of the size of the gap between expectation and reality, that Rahul Gandhi -- much-mocked and dismissed -- is able to make the government look defensive.

In other words, not only is Modi's India not the shining land of dynamism and prosperity that he promised -- though it may be that, for some people, in a few years from now -- but socially it has the positively regressive tendencies that were entirely predictable.

It's possible that capital may one day decide it loves this country. But it's not as clear that a considerable number of Indian citizens still will.