All animals suffer, not just cows 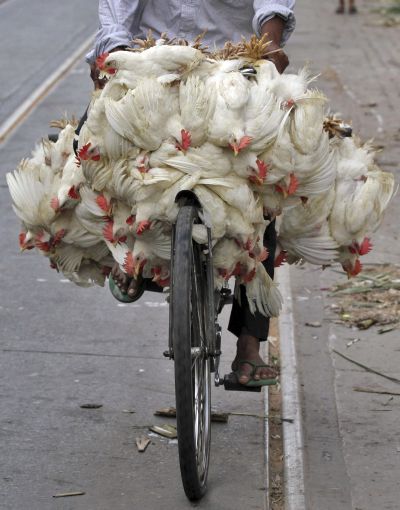 'I do not agree with what you eat, but I'll defend to death, at the cost of the animal's death unfortunately, your right to eat it.'

A long-standing colleague has spent the last year faithfully visiting every restaurant across Mumbai, big or small, that serves beef steak.

His logic when I asked him last year: Modi's government is coming. Very soon we won't get to eat steak anymore.

While I was amused then at his logic, I could only be surprised by his foresight when I read, bemused, that beef can no longer be consumed in Maharashtra.

Being a vegetarian -- I am a seriously staunch animal lover and definitely not a proponent of Hindutva-style shakahari-ism -- I am caught in a conflict.

It makes scant difference to me if they stop slaughtering just cows. It is just one poor, luckless creature among many being brutally slaughtered in a bad system.

All animals suffer, not just cows. Think of those sad-looking chicken, being carried upside down, tied to bicycle handlebars, to the market for certain, inhumane, death.

More important is to examine, in these modern times, the manner in which an animal is allowed/not allowed to live his life and how he is slaughtered, whichever the species.

And to look at how livestock is being unhealthily (for humans), industrially reared purely for ingestion by the 'higher' species and as well as for providing us milk (the bhakts, too, please note), eggs and wool.

This pretence reverence for cows stems from no real honour or feelings for cows. Or they would first make sure that the cows tied up all over the place for people to worship and feed with a bundle of grass do not lead their day semi-strangulated on ropes one-foot long.

As an animal-wallah, and an average feeling human being, one finds it truly unbearable to read about violence, pain and any killing, of animals or people. We put them on the same scale, even if you may not understand.

Growing up vegetarian in an ignorant 1970s America, and then India, and having travelled to several countries across the world, I know how it feels to be -- mostly unconsciously and unknowingly -- discriminated against for being vegetarian.

You are just considered weird.

The minority that ought to be ignored.

The stupid unhealthy people who eat grass, ha, ha, hurt plants, should realise they need to eat chicken soup when they are sick or to have strength to play a sport, and are questioned over and over again -- till you feel like screaming -- on why they eat eggs, wear leather or what they would do on a deserted island with their dog/goat/ bleh--.

Asked when they are going to 'convert'. Or jokingly offered a ham sandwich. Childish stuff. Goddamit, it is my choice! Mind your own beeswax. I am sure you are peculiar in certain ways too, like I am.

Within my family and home I have taken on battles to establish that my way of life needs to be respected. I am not going to eat a curry or a biryani from which meat pieces are fished out. Or be expected to always provide for myself at a family gathering, because no one can be bothered to figure out what a vegetarian wants to eat.

Respecting another's way of life is a key principle here.

I would like you to respect my way of life.

In turn, I need to respect your way of life.

While I would like the cost to animals and the price these creatures have to pay, for being objects of consumption, across the planet to decrease, I know as a vegetarian I need to respect the meat-eater's way of life too, whether I like it or not.

That is why banning beef is wrong.

Simply, and quite obviously, neither can a majority nor a minority impose rules on either one. It is a matter of rights.

I do not agree with what you eat, but I'll defend to death, at the cost of the animal's death unfortunately, your right to eat it.

If I want my vegetarian rights guaranteed, in turn I must guarantee your non-veggie ones.

Just because I am vegetarian, it does not mean I weighed in on a decision by the President of a country of one billion plus and the chief minister of a state to come up with this kind of illogical ban that affects a considerable population of people.

It is very much like the fact that all Hindus today have to pay the price for their few co-religionists who have hijacked a temperate and mostly gentle philosophy, breathing fire, spreading hatred, trying to impose ditzy ideas, promoting cultural imperialism; some of it strongly visible in the social media space.

So I am not for a ban on beef, even if I am a staunch vegetarian.

Finally, a beef ban is about imposing fundamentalism in everyday life.

The same fundamentalism that is causing untold human bloodshed -- be it the ISIS executions or the killing of young women of the 'wrong' caste in Uttar Pradesh.

Don't waste your time on fundamentalism. And pettiness.

Image: Chicken being transported to their death in Kolkata. Photograph: Rupak De Chowdhuri/Reuters 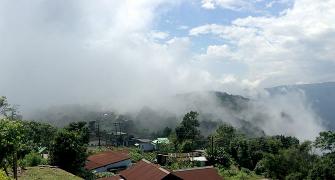