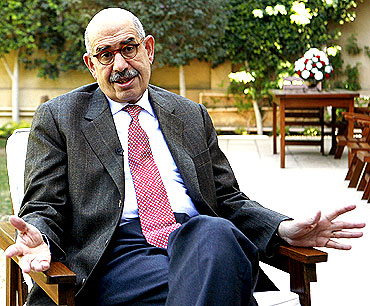 A few years ago, when Mohamed ElBaradei faced stiff opposition from the United States in his quest for a third term as the director general of the International Atomic Energy Agency, I noted the physical similarity between him and Mahatma Gandhi (bald head, thin framed glasses and sharp eyes) and expressed the hope that he would be as successful in dealing with the US as Mahatma Gandhi was in confronting the UK.

Today, ElBaradei is emerging as the Gandhi of Egypt, advocating a civil disobedience movement to bring about change after 30 years of "stillness and subservience". His return to Cairo after acquiring respect domestically and internationally was, in some respects, like the return of Gandhiji from South Africa to his motherland. He has kindled hope for change, even if the odds are heavy.

Hosni Mubarak introduced constitutional reforms in 2007 to move from referendums to elections to gain legitimacy for his regime, not to encourage challengers. He stipulated, therefore, that any candidate for the presidency should be a leader of a registered political party with experience or secure the approval of 250 parliamentary and local council members to contest as an independent candidate. The election, scheduled for 2011, it was believed, would bring back the National Democratic Party to power either with himself or his son at the helm.

Mubarak has sought to deal with the ElBaradei surprise by coolly remarking that ElBaradei had the right to take part in the election independently or as a leader of any of the political parties, "as long as he meets the constitutional requirements." In other words, he is certain that change is not around the corner and that he is not about to preside over the liquidation of his own empire.

I had expected that after his glorious innings at the IAEA, the Nobel Laureate would move to his chateau in Southern France, enter the celebrities' circuit, become the greatest champion of the use of nuclear energy for peaceful uses and a trouble-shooter for the United Nations and play his favourite game of golf in between. When I expressed surprise that he had plunged into politics in his own country, he replied, "Getting involved in Egyptian politics was not planned It came by default when people saw in me a symbol for change. I do not know how it is going to play out, but I think it is worth a try. Egypt and the Arab world need to wake up and smell the coffee and understand that without democracy, it is a dead end street."

Clearly, his agenda is vast and formidable as he is speaking of democracy in the entire Arab world. But he also has formidable credentials. As an international lawyer, he was a distinguished member of his country's foreign service before joining the IAEA as an international civil servant. He brought credit not only to himself but also for his country in the years he spent in Vienna. He was elected director general against stiff competition at first, but sailed through in two subsequent elections without even a sign of a credible opponent.

His administrative abilities, efficiency and impartiality are legendary. At a time when several UN institutions were accused of nepotism and corruption, the IAEA and its director general won the Nobel Prize for Peace, 50 years after it was established to develop atoms for peace. He weathered many storms, some of them involving the most powerful nations of the world. His biggest moment was when he made a strong bid to dissuade the United States from going to war with Iraq. He agonised over the words he chose to present his case at the Security Council, but spoke them with clarity and precision. His position was attributed to his nationality and his religion, but he stood for truth and justice in a manner many international civil servants would not have done.

Again, he acted with proverbial impartiality in the case of Iran. He grilled the Iranians to bring out the facts, reported noncompliance by Iran on specific aspects of their commitments, but stuck to his position that he had no evidence to show that Iran had embarked on a nuclear weapons path. It was only after he left the IAEA that the agency opened the way for confrontation by suggesting that Iran might be guilty of a nuclear weapons programme.

His steadfast position even sparked off a rumour that his wife, Aida, a full-blooded Egyptian, was an Iranian!

The weapons in his armoury to battle for democracy are his credibility and honesty that made him popular in Egypt itself. His new role as an apostle of democracy should give his people hope. "There would not be one saviour for Egypt", he says modestly. The Egyptian people themselves should save their country, he believes.

So far only the intellectuals and young people have been ignited by him. His Facebook page has only 55,133 fans at the last count. His language is diplomatic and his vocabulary is not confrontational. But there is no doubt that he is ready to take up the leadership, whatever be the consequences. He is not looking for a sinecure to rest on his laurels. He has already invited attention to the repressive nature of the regime in Egypt and the flame that he has lit may well become a fire. Even if he creates a system that gives a fair chance to those who follow him, his mission will be fulfilled.

Many nations have honoured those who have done well abroad, particularly at the United Nations, by making them presidents. I know at least three -- Kurt Waldheim in Austria, Marti Ahtisaari in Finland and Danilo Turk in Slovenia -- who were virtually invited to head their nations. Many others have become foreign ministers. In Egypt itself, Amre Moussa, who was my contemporary in New York, became the foreign minister and later the secretary general of the Arab League. Our own Shashi Tharoor was warmly welcomed back for his accomplishments at the United Nations.

But ElBaradei is unique as he has come back as a messiah of democracy, determined to change the system in his country and to bring freedom to his people. His 'New Front for Change' seeks to reform the constitution to create a level playing field. "ElBaradei constitutes a real challenge, not necessarily in his capacity to win an election, but in terms of his prestige," remarked a professor at the American University in Cairo. Whether he succeeds in his mission or not, Mohamed ElBaradei has created history. Freedom-loving people around the world should wish him well and pray for the Egyptian Gandhi.

One of my golf partners, Sitiveni Rabuka of Fiji, stifled democracy in Fiji and became the head of state. My other golf partner, Mohamed ElBaradei, may well usher in democracy in his own country and lead his people to freedom.

Image: Mohamed ElBaradei at his villa on February 27, 2010, during a media interaction. Photograph: Asmaa Waguih/Reuters 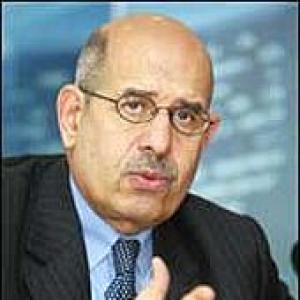 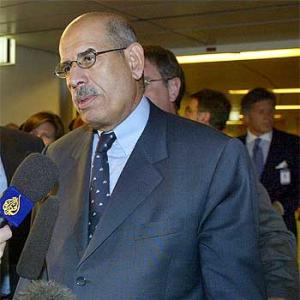