'Why don't you go and ask the BJP if it will authenticate what Sanjay Kakade said?'
'They would not say a word because they are enjoying themselves.' 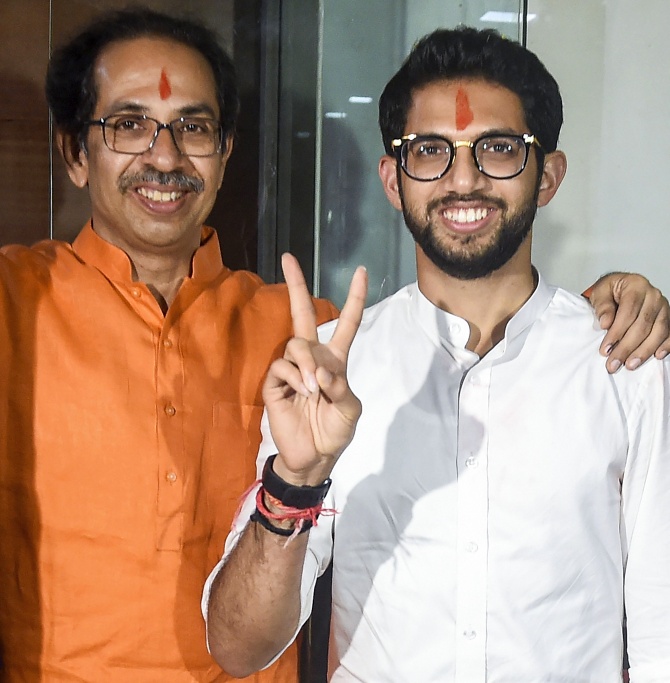 IMAGE: The Shiv Sena led by Uddhav Thackeray is adamant that its newly elected MLA Aaditya Thackeray is made Maharashtra chief minister as per a 50:50 formula. Photograph: Mitesh Bhuvad/PTI Photo

The already strained ties between allies -- the Bharatiya Janata Party and Shiv Sena -- has taken a turn for the worse with both parties squabbling over the Maharashtra chief minister's post, with the Sena claiming the existence of a '50:50' deal under which the CM's post would be shared by the two parties for two-and-a-half years each.

The tussle for the CM's chair reached a fevered pitch on Tuesday, October 29, when BJP-backed Independent Rajya Sabha MP Sanjay Kakade told a television news channel that at least 45 of the 56 Shiv Sena MLAs were keen to join a government led by Chief Minister Devendra Fadnavis.

"The Shiv Sena is no more a greenhorn. We have earned our place in the hearts of Maharashtra's people through our hard work," Sawant told Rediff.com's Prasanna D Zore.

Intriguingly, the BJP, which is locked in a furious tussle with the Sena over the Maharashtra chief minister's post, has not refuted Kakade's statements in unambiguous terms.

"Who is Kakade?" Sawant asked, adding, "I could have given credence to such statements if they had come from some senior BJP leader or from Sudhir Mungantiwar (finance minister in the previous BJP-Shiv Sena government) or Devendra Fadnavis. What standing does Kakade have in the BJP?"

"The chief minister has made it clear that Kakade must be speaking in his personal capacity and he has not met or communicated with Kakade," Madhav Bhandari, senior BJP leader from Maharashtra, when asked to clarify the BJP's stand vis-a-vis Kakade's comment, said.

Asked if Kakade's statement had the BJP's approval or support, Bhandari added, "I have said very plainly that the CM has hinted that whatever he (Kakade) is saying, he is speaking on his own. No one should derive any inference from this."

Asked if Union Home Minister Amit Anilchandra Shah would visit Mumbai to meet Shiv Sena chief Uddhav Thackeray on October 30 to discuss the contentious issues grappling the two allies who fought the 2019 assembly election together, Bhandari said "My party doesn't have any information (about Shah's meeting with Thackeray) at this moment."

"We are not bothered about who says what. All's well in the Shiv Sena. Our party chief is in total control and under his able leadership the Shiv Sena is standing on a solid footing," Desai said.

Desai too was ambiguous when asked about Shah's meeting with Thackeray. "We are not bothered about who is coming (to Mumbai) and going. Uddhavji will take care of everything," the Sena's Rajya Sabha MP said.

Reminding the BJP that the Shiv Sena has steeled itself for the battles ahead, Sawant said, "The Shiv Sena are no longer amateurs. We also understand realpolitik."