By Arthur J Pais in New York
Last updated on: April 07, 2008 17:03 IST
Why is God laughing?' muses Mike Meyers, the comedian whose Austin Powers movies have grossed over $1 billion worldwide.

Meyers knows the answer: He gets the joke.

But Meyers and Dr Deepak Chopra, whose book Why Is God Laughing is to be released in June around the same time as Meyers's film The Love Guru, are worried that some Hindus don't get the joke in the movie.

No matter what you write or do, the fundamentalists attack it," Dr Chopra tells rediff.com in an exclusive interview. This is the first time anyone has held a long discussion on the $80 million film. "It doesn't matter if you are a Hindu, a Muslim or a Christian: If you are a fundamentalist, you have a problem."

The group Universal Society of Hinduism led in America by Rajan Zed, who made history when he recited prayers in Sanskrit in the United States Senate last year, were worried when trailers of the film popped up a few weeks ago. They successfully demanded that they should be shown the film.

The Love Guru has for its tagline: His Karma is Huge.

It focuses on Pitka (Meyers), an American raised outside of his country by gurus but who returns to America to break into the self-help business. His first challenge: To solve the romantic troubles and subsequent professional skid of a star hockey player whose wife left him for a rival athlete. 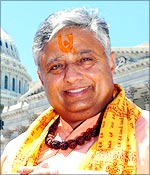 "From the information available about the movie, it appears to be lampooning Hinduism and Hindus and using Hindu terms frivolously," says Zed, right. "Guru is a highly revered spiritual teacher/master/preceptor in Hinduism who helps remove the ignorance of the seeker and who leads one from darkness to light. The guru-sishya (teacher-disciple) relationship lies at the heart of traditional Hinduism. Guru is often associated with the divine. Guru imparts spiritual knowledge completely free from selfish motives."

"Paramount (the distributor) has indicated that they wanted to work out the issue with us," he adds. "We hope that Paramount will be sensitive to the sentiments of the adherents of the third largest religion in the world."

But Dr Chopra, who is making waves with two bestsellers, The Buddha (a novel) and The Third Jesus in which he argues that Jesus Christ is not the monopoly of Christian churches, would not have wanted Paramount to show the film to Zed and like-minded protesters.

"Mike was being conciliatory," says Dr Chopra, speaking in his austere office at the Chopra Spa in New York. "He said he will meet them, show them the movie, etc. I called Mike and said to him 'If you think you are going to placate them, you are going to anger them even more.' I would not placate them." 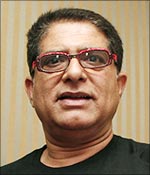 Dr Chopra, left, who is being called the anti-Christ and a devil by fundamentalist Christians for claiming that Christ never intended to start a religion, adds: "I would make fun of them (the Hindu groups). I would say your faith is so weak that a comedy can offend you. I would then tell them, Your faith is not faith; it's a cover up for insecurity. Just because you are vegetarian and you dress like Hindus it doesn't mean you have strong faith."

He is reminded of a line from Woody Allen about the end of the world: On Judgment Day the lions will lie down with the lambs, but the lambs will be very, very nervous.

Asks Dr Chopra: "In this case we have Hindu lions attacking Hollywood lambs, but why?"

"The Love Guru is a comedy, and comedies poke fun," he continues. "I make a cameo appearance in the film, and viewers will find out when they see the film that no one is more thoroughly skewered in it than I am -- you could even say that I am made to seem preposterous."

If he doesn't take offence and some Hindus do, that doesn't make him superior or even innately tolerant. "I know the difference between a belly laugh and a diatribe," he says.

"If you truly understood your faith, you would not be so easily offended," he continues, speaking gently but firmly. "Because what is offended is your ego. You are actually showing the weakness of your faith. I'm making fun of myself in the movie."

Meyers, who is the voice of Shrek in the phenomenally popular Shrek films, has said his movie pays tribute to three things he cherishes most: The Beatles, the James Bond films, and Deepak Chopra with whom he has shared the stage in New York and other cities doing stand-up comedy. He imitates Dr Chopra's accent in the film.

"I'm making fun of Mike in my book," Dr Chopra adds, and then goes at the protestors.

"What kind of Hindu are you? You are so easily offended," he adds. "I told Mike, 'Let's go on the offensive. We should thank them for making the noise. The more noise they make, the more successful the movie will be.'" 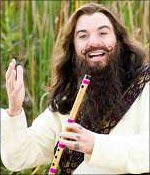 While Meyers and Paramount apparently do not want to sound hostile to any faith, they may have the last laugh if the film becomes a big hit when it unfolds in some 3,000 theatres in North America.

How did Meyers come to know Dr Chopra?

"A few years ago, he had a bit of an existential crisis," Dr Chopra reveals. "He started to read some of my books, listen to the tapes, and (in the last 3, 4 years) to entertain himself he started to do one-act theatre in Greenwich Village, New York, where he would imitate my accent. Then he started to write the screenplay and he came to me and said, 'Listen, I am a comedian and the only way I can pay tribute is through humour. I want to pay tribute to you because you have influenced my life and so this is a screenplay about someone who wants to be like Deepak Chopra. I want you to do a cameo appearance and just give me your blessings.'"

Meyers writes in the foreword to Dr Chopra's book Why Is God Laughing: 'I've had many heroes in my life. My father was the first; Deepak Chopra is the most recent.'

Why Is God Laughing is a curious mix of a novel and how-to manual, 'Deepak has managed to dramatise brilliantly in the form of Mickey Fellows, a comedian forced to face his darkest fears,' says Meyers.

'Deepak shows us that there is darkness in the world and that comedy is a candle; he encourages us to meditate on the candle and not the darkness.'

Dr Chopra has not seen the edited film but he has seen quite a bit of it, and he has confidence in Meyers, the star and producer, and first-time director Marco Schnabel, who worked as an assistant director on the Austin Powers movies.

Adds Dr Chopra: 'Of course, the movie makes a lot of fun about New Age spirituality. I thought this was a great opportunity to make our Indian philosophy even more popular because despite the popularity of the books, young kids do not know much about it; and humour is a good vehicle. So I told Mike 'You do the movie that is a spoof and I will do a book at the same time.' It is actually about Mike and how he is a depressive person who covers up his existential depression through comedy."

"You should write to him (Zed) saying that you met Dr Chopra," he tells this reporter. "Tell them that Dr Chopra is very thankful to you for creating so much publicity both for the movie as well as for his book."

"They (the religious critics) will create our publicity," he says with a chuckle. "They are going to help us. The more noise they make, the more popular the film will be and the more people will begin to relate to Indian philosophy."

In an e-mail note to this reporter Zed says he and other protestors "support freedom of expression and creativity."

"Cinema is a powerful medium," he notes. "We object when it aids in creating negative stereotypes of Hindu characters. The Universal Society of Hinduism aims at providing worldwide Hindu identity, enhancing understanding of Hinduism, and fostering inter-religious dialogue. We are expressing the overall sentiments of the Hindu community by taking a stand regarding this film. Various other groups and individuals have also come out on this issue."