Sign in  |  Create a Rediffmail account
Rediff.com  » Movies » You Know You're Watching A Subhash Ghai Film When... 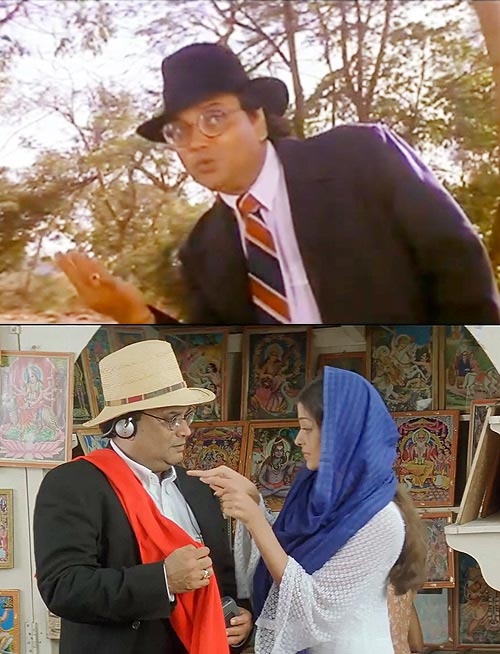 And then, there're these...

When a filmmaker is as prolific as Subhash Ghai, he develops quite a few signature traits over the years.

If Yash Chopra’s romances are synonymous with Swiss flower fields and white-clad heroine and Rakesh Roshan harbours a keen K fixation, Ghai’s penchant for flamboyance and theatrics is reflected in all his creations.

From Kalicharan to Kaanchi, the director of mega blockbusters and star-studded entertainers may not have rocked the box office in a very long time but his fondness for certain filmmaking elements, props and plot devices is recurring in nearly all his movies.

Here are 12 things we’ve come to expect from a Subhash Ghai creation:

Subhash Ghai began his career wanting to be a hero but found success making one.

Still, the deep-rooted acting bug urged him to pitch in cameo appearances in many of his films, like the legendary Alfred Hitchcock -- as a random fella on the road popping up from nowhere to sing Ding Dong in Hero or bumping into Aishwarya Rai at a vegetable market in Taal. 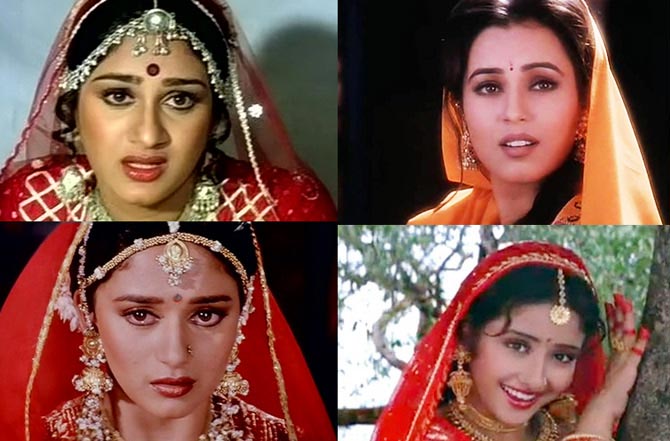 Their name begins with M and they all found success under Ghai’s Mukta Arts banner.

Ghai’s serious fixation with the letter is responsible for Mahima, originally Ritu, changing her name while Mishti, originally Indrani Chakraborty, uses her pet name for her big debut. 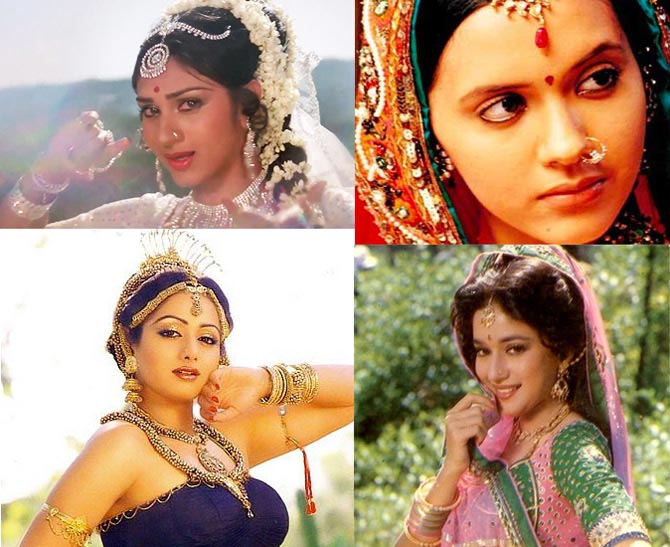 Speaking of Ghai’s heroines, they’re as shuddh desi as it comes.

She's got the look 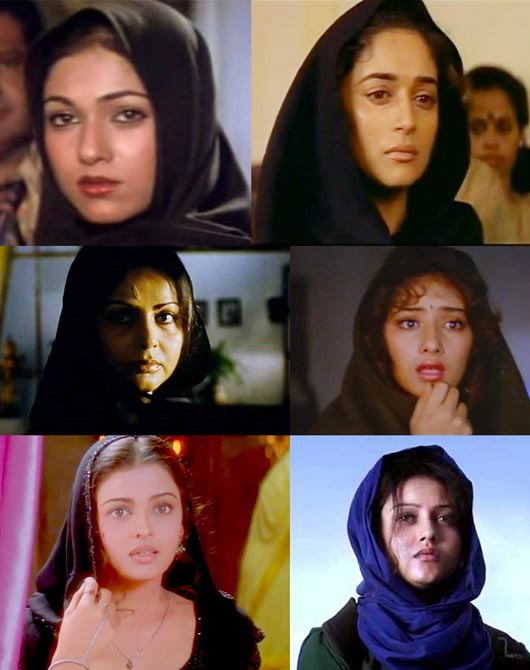 If Raj Kapoor and Yash Chopra loved to dress their heroine in dreamy white chiffon, Ghai seems to have a thing for this intense covered head look. 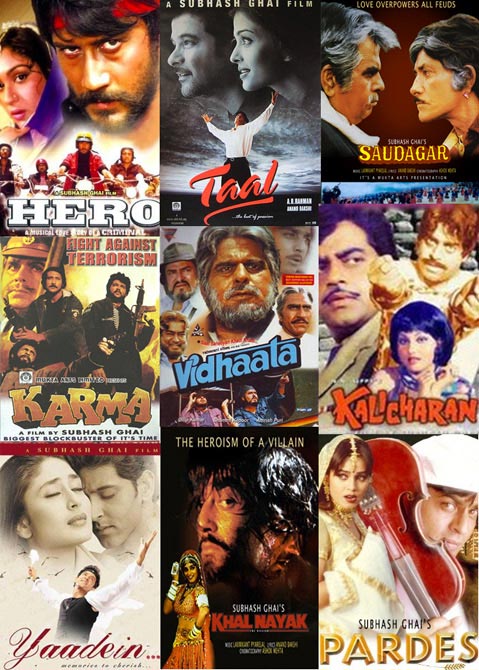 His films are relatively long, characters are verbose but when it comes to naming them, Ghai likes to keep it pithy and striking -- Saudagar, Hero, Kroadhi, Vidhaata, Vishwanath, Kalicharan, Yuvraaj, Taal, Saudagar, Khalnayak, Karma, Karz, Yaadein, Kisna, Pardes and Kaanchi. 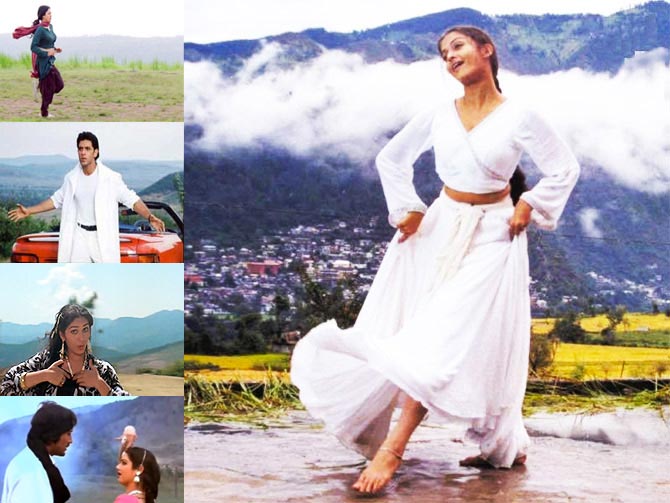 Whether it’s the serenity or lushness of mountainous landscapes that attracts him but it’s quite easily one of Ghai’s favourite backdrops.

Be it Saudagar, Taal or Kaanchi, the man somehow finds a way to squeeze in a song or character based in the hills for his pictures. 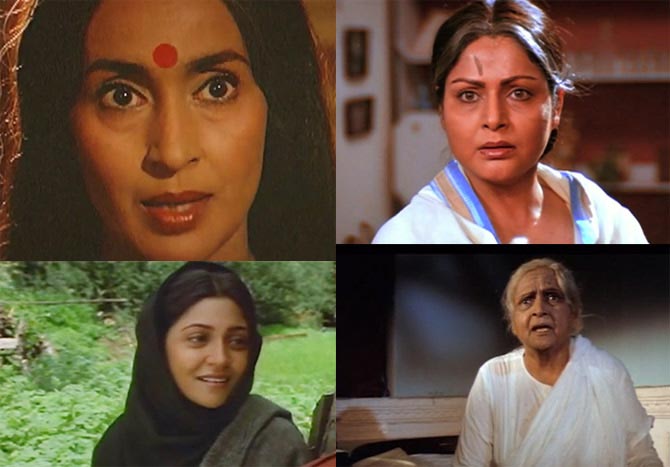 Wronged, traumatised and haunted by horrors of a past tragedy, the mother is regularly the emotional core of his grand spectacles. 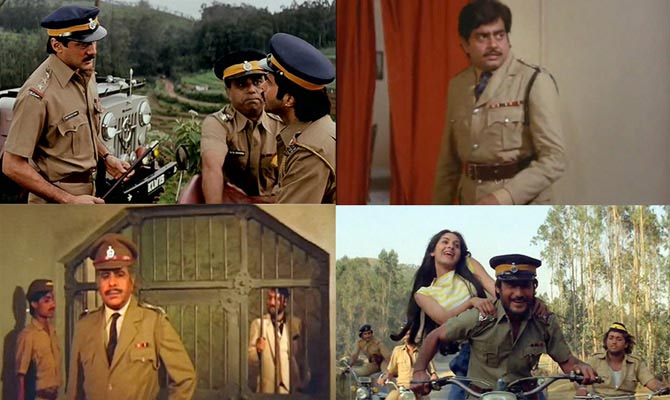 Men in khakhi sparring with men behind bars, is another favourite theme of Ghai’s.

Be it Dilip Kumar’s jailor giving Anupam Kher’s Dr Dang a resonant dose in prison in Karma, Sanjeev Kumar’s comical antics as cop around criminals in Hero, Jackie Shroff and Sanjay Dutt’s law versus outlaw face-off in Khalnayak, Anil Kapoor’s one two ka four approach as inspector in Ram Lakhan or Shatughan Sinha’s dual avatar as inspector and offender in Kalicharan, Ghai sure loves a game of chor police. 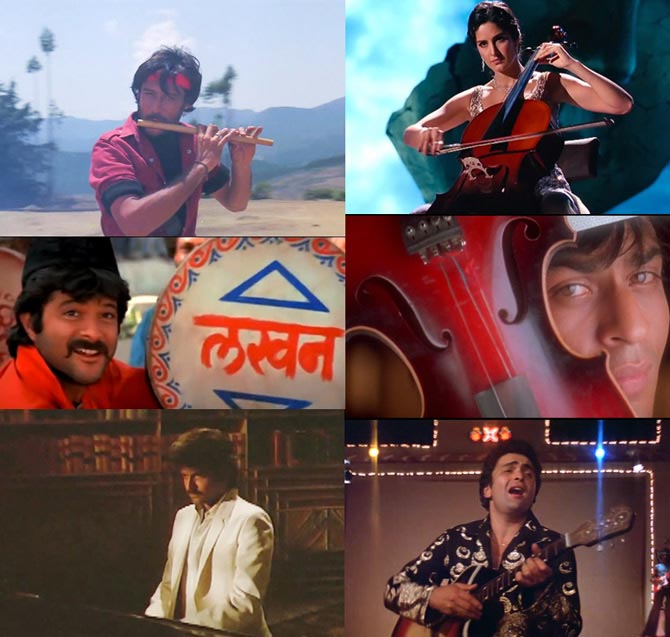 That Ghai has a fine ear for music is evident in most of his soundtracks. But have you noticed how he loves to create characters who can skilfully play an instrument or two.

And so Anil Kapoor tosses his lawyer’s suit to get behind a piano or beat the dafli like a PRO in Ram Lakhan, Rishi Kapoor juggles between the iconic guitar play and violin in Karz, Jackie Shroff plays the haunting Hero tune on his flute, Katrina Kaif turns cello expert in Yuvvraaj and Shah Rukh Khan strums the strings for Pardes. 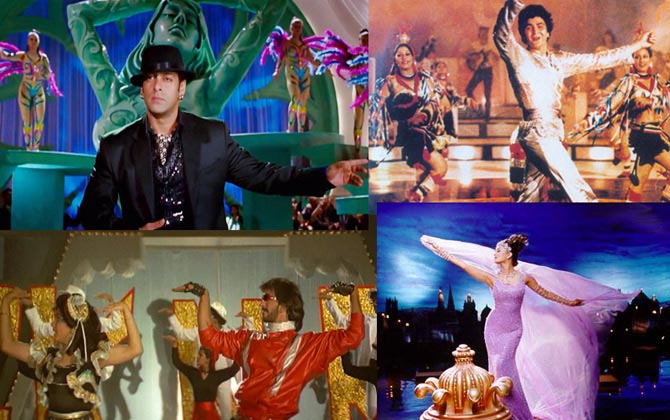 There’s a reason why Subhash Ghai held the title of showman for many years.

His opulent, larger-than-life picturisations of song and dance, frequently on the stage, unabashedly honour Bollywood’s enduring imagery of razzle-dazzle. 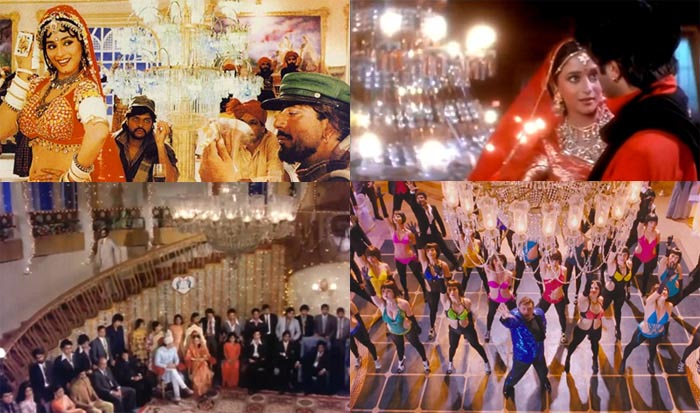 The first requirement of grandeur in Subhash Ghai’s book -- a sparkling chandelier looming large in the frame lending it obvious splendour and scale.

If you notice hard enough, you’ll see one in nearly all his movies.

We spotted one in his first -- Kalicharan.

We spotted one in his latest -- Kaanchi. 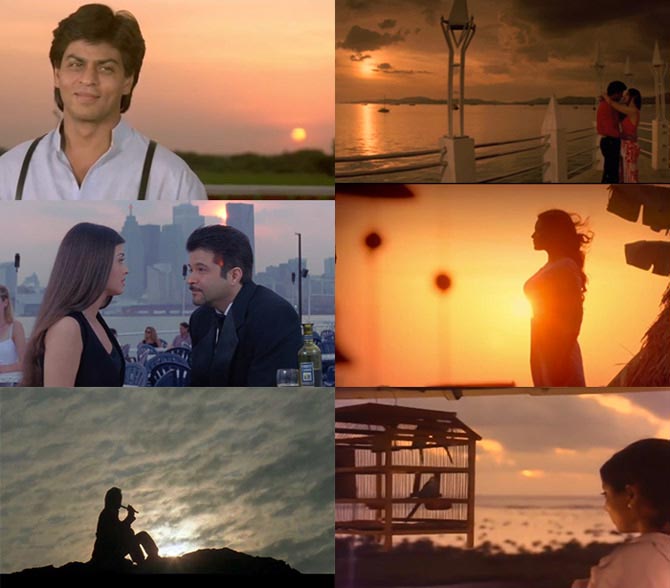 Having worked with cinematographers like Kamlakar Rao, Ashok Mehta and Kabir Lal in over four-decades long career, Ghai’s films are stunning to look at.

While his cameraman’s sensibilities may vary from project to project, they’ve all captured the director’s fondness for shots of glorious, golden sunsets or silhouettes against them in all his ventures, including Kaanchi.

You just can’t miss it.