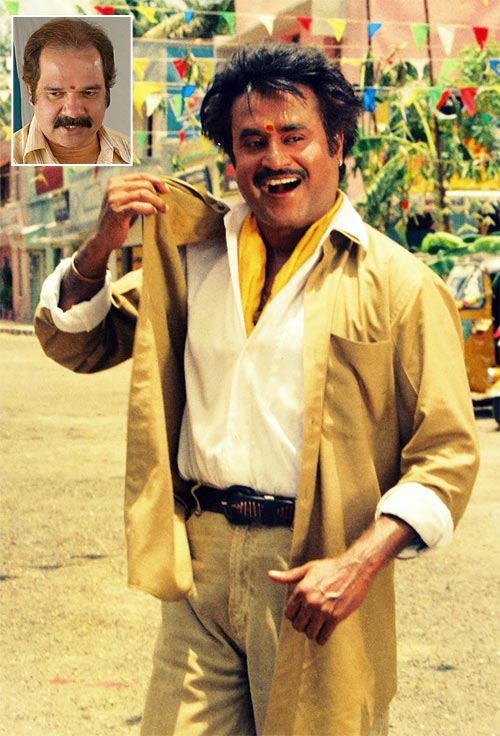 Working with Tamil superstar Rajinikanth has been a dream for many filmmakers.

Suresh Krrisna had the opportunity of directing him in such bloxkbusters like Baasha, Annamalai and Veera.

He shares his experience of working with the Superstar in his book called My Days with Baasha: The Rajnikanth Phenomenon, which has been launched today on Rajinikanth's 62rd birthday.

We present an excerpt from the book here.

We're at Albert Theatre, Chennai. The air is rife with excitement.

There are huge portraits of Rajnikanth at the entrance, as well as rows of colourful pennants swaying in the wind. Producer A.V.M. Saravanan, actor Sivaji Ganesan's family, including his sons Ramkumar and Prabhu, a lead actor in his own right, Tamil film directors S.P. Muthuraman, R.V. Udhayakumar and P. Vasu, and other eminent personalities from the industry have turned up for the special screening of the film.

So have fans of the actor. The full house seems to augur the stupendous success that is to come Baasha's way.

Rajnikanth's wife Latha, and daughters Aishwarya and Soundarya, have arrived. I knew Rajnikanth would not be found anywhere near the venue that evening. Even now, after so many films and innumerable years of experience, Rajnikanth can never sit through a premiere of his film calmly. With anxiety writ large on his face, he is like a newcomer on the eve of his maiden release.

Because, to him, every film is equally important. Such dedication can take an actor only one way -- upward.

And the Superstar continues to prove it time and again!

Excerpted from My Days with Baasha: The Rajnikanth Phenomenon by Suresh Krissna and Malathi Rangarajan. The book is being simultaneously published by Westland Books in English, Tamil and Telugu. The English one is priced at Rs 250.

'Rajnikanth is a very private person' 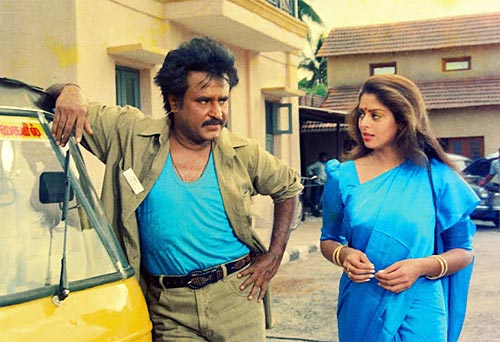 Image: Rajinikanth and Nagma in Baasha

Rajnikanth is a very private person.

Before the release of his film, he watches it with the main technicians once, and that's it. If there are a hundred invitees gathered for a show of a Rajni film, you will never find him there. It's been the same from the day I met him, and filmmakers are used to it.

'No point, Sir, no one can convince him to attend the show,' the crew would tell me whenever I suggested he should join us for the premiere.

But after the screening, he would call up each one of his close friends to find out their responses. 'What did you like about it? Did you find any obvious flaws? Tell me frankly,' he would ask.

Not once have I heard him sound overconfident about a project. The tension he goes through before every film of his rolls out is unbelievable. And for all that, he is one actor whose films have a guaranteed opening! 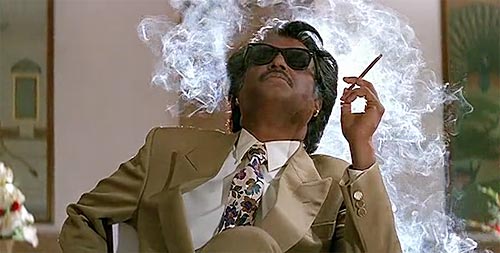 Baasha was our third film together. Our combination had worked wonders at the box office on the two previous occasions, viz., Annamalai and Veera, and so the hype surrounding the third had scaled feverish heights.

The bigwigs in the film world maintain that Annamalai, my first film with Rajnikanth, made in 1992, was a turning point in both our careers. I cannot but agree. Annamalai ran without let-up for twenty-five weeks!

Described as one of Rajnikanth's greatest hits, it established without doubt that he was the reigning Superstar.

'Veera was very different from Annamalai'

Veera, our second, made in 1994, was very different from Annamalai in content and treatment, and yet it turned out to be another money-spinner. The feel-good film -- with its ample dose of comedy and romance -- was lapped up by filmgoers with the same enthusiasm they had shown to the action-packed Annamalai.

The general verdict was that though Veera was enjoyable, the protagonist wasn't as heroic as in Annamalai.

Rajni and I were prepared for the comparison. After Annamalai, we knew filmgoers were enthusiastically looking forward to another bout of unbridled action from the duo of Rajnikanth–Suresh Krissna. Their expectation was natural, and initially it did worry me.

Rajnikanth thought otherwise and I soon found his contention convincing. In fact, even while we were busy with Annamalai, the idea for Baasha had germinated.

But Rajni told me, 'Let's play our cards carefully. When a director and hero come together for a second time, it is bound to be compared with the first. Let's shelve Baasha for now. Annamalai is emerging as a power-packed treat for my fans. If we follow it up with a similar film, the impact may not be as great as we intend it to be. Instead, let's go in for a slightly different genre, tone down the heroism in it and then return with an action-packed thriller. It will work better that way.'

He was absolutely right. Just as he predicted, Baasha turned out to be a smash hit.

Despite Veera being a softer film, his fans had a hunch that Rajnikanth would go back to the dynamism of Annamalai in our third endeavour.

'I'm not the excitable kind. Nothing ruffles me easily' 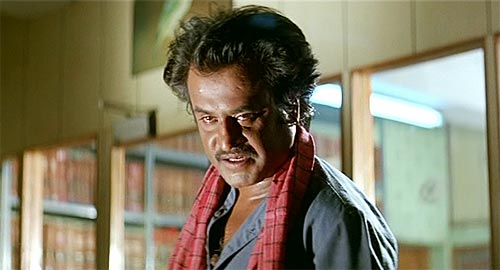 The air was fraught with frenzy and eagerness, and when the screen exploded with the logo, 'SUPERSTAR' -- incidentally, the prefix was used for the first time in the credits of Annamalai; more on that later -- the fans present went delirious with joy.

They flung heaps of used lottery tickets in the air to show their excitement and their deafening whistles ripped through the hall.

The crowd was going crazy, but I stood calm. I'm not the excitable kind. Nothing ruffles me easily.

Or so I thought at that moment.

'Right from the day I began working on Baasha, I had unswerving faith in the film' 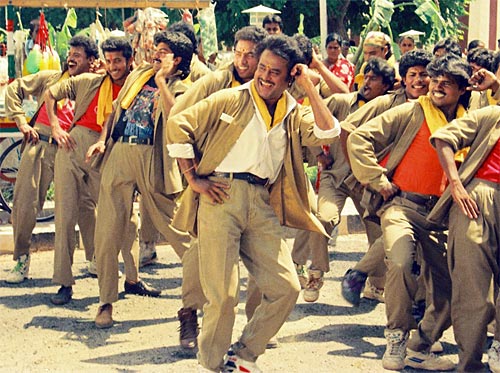 Right from the day I began working on Baasha, I had unswerving faith in the film. I was sure it would work in a big way. But then, as it began to unfold on screen, calmness gave way to anxiety.

Rajnikanth's entry with the song Naan Autokaaran ('I am an auto-rickshaw driver') was met with thunderous applause.

I didn't know it then, but the din of whistles that refused to subside when the song was going on, exemplified the response the rest of the film was going to evoke.