Sign in  |  Create a Rediffmail account
Rediff.com  » Movies » Taapsee: Mogudu will be a landmark in my career

Taapsee: Mogudu will be a landmark in my career 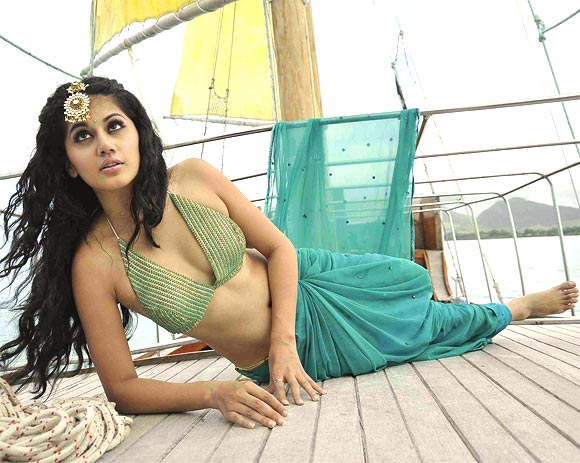 The going has been great for Taapsee Pannu this year. She's had five releases in Telugu, two in Tamil (her first film Adukalam bagged several National Awards) and one in Malayalam.

She made her Telugu debut in K Raghavendra Rao's film Jhummandi Naadam and went on to sign other projects like Vasthaadu Naa Raju, Mr Perfect and Veera.

In this interview with Radhika Rajamani, Taapsee discusses Mogudu for which she has dubbed herself.

What was your first reaction when you got a call from Krishnavamsi to star in his film?

Well, actually, before Krishnavamsi Sir spoke to me, I got a message from my producer Mr Bujji. The message was: would you like to work in a Krishnavamsi's movie? That was one of the best good mornings I have ever got because Krishnavamsi is one of my target directors. As artistes, we always have a list of directors we really want to work with and he is one of those on the top of my list.

So, even before I heard the script, I accepted the project. It was the first time I had done that. I blindly went with the name and discussed everything with the producer. The first meeting I had with Krishnavamsi Sir was after I had already signed up for the project and he told me the story.

Krishnavamsi's films usually have substantial and meaningful roles for women. What about your role in Mogudu?

I have only seen his Telugu film Murari and Shakti in Hindi. If people feel Sonali Bendre's role in Murari was good, they are in for a big surprise after seeing Mogudu. My character in Mogudu is very strong. I am not the sympathetic, empathetic character, poor, giving, and sacrificing. 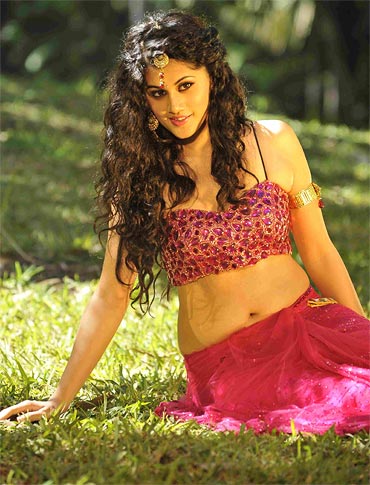 How exciting was it to play this role of a wife? Was it something you could relate to?

It was very new and difficult to portray a wife's character. If you see the movie, you'll actually know it is about how a girl transforms into a wife. It's not just about the girl and the guy; it's about both their emotions towards their in-laws and their own families. So it was very difficult for me. I don't have a clue about how a married woman feels. I would surrender myself to the director and would ask him to tell me how to do it. I had to learn from scratch and that's how I built it up.

How challenging was Krishnavamsi as a director?

He's very challenging. He will make you go through the toughest of things and situations very smoothly. On the very first day of the shoot, my inaugural shot, I was wearing my Kuchipudi get-up that you see in the trailer as well. I was trying out my ghunghroo, standing barefoot in the hot burning sun. With six key lights on my face and all that jewellery and make-up, it was tough. So from the very first day, I was prepared for a tough, grilling schedule ahead.

What have been the learning lessons from this film?

Lots of things. Particularly from KV Sir. On how very small things in your body language make a lot of difference on the screen. He taught me all that. I realised that he had immense observation skills. 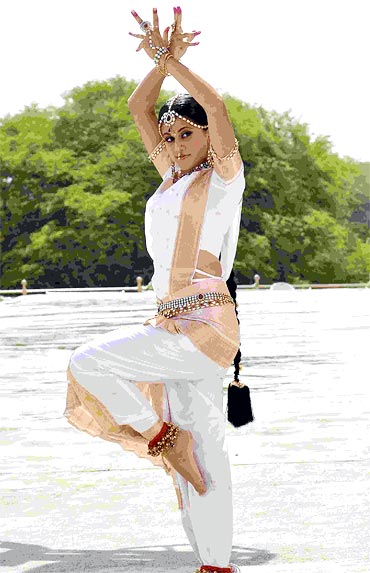 This is your first film with Gopichand. How was it shooting with him?

He is very shy, soft-spoken and introverted, and alwyas keeps a smiling face. Whenever he was there in the shot, he would tell me, "If you have trouble learning a long dialogue in Telugu, say it in Hindi to get the right expression, and then say it in Telugu so that you don't lose out on that expression." He encouraged me a lot.

Shraddha Das is the other heroine in the film. Did you have any opportunity to shoot with her?

Yes, all our major scenes were together. She has a good role to play in the second half of the movie, but our roles are poles apart in the movie.

She is a a professional and I think she will get a lot of notice and appreciation after this movie. She deserves it.

Everyone has been talking about your glam quotient in the posters and the film. What's your take on this?

I'm only in pattu (silk) saris, salwar kameez or churidars in the film. There is only one sensuous song (Kavaali) which is from a wife's heart about how she wants her husband to be. So in that song I wear those netted sarees. The way it's been shot is aesthetic and it's not that I'm forcibly showing off any skin.

The posters are from that song. It's in the hands of the producers and not in my hands to decide which pictures comes out. In this movie I am not a glamorous person at all.

'It was a hair-pulling experience to dub for the film' 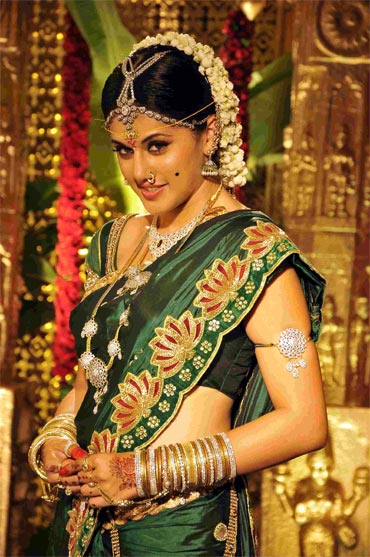 Have you enjoyed doing the film?

Yes, I have enjoyed it. I have learnt a lot. Regardless of the result, this movie will be a landmark in my career.

You also dubbed for Mogudu. How was that experience?

In Mogudu, I am a proper Hyderabadi Telugu girl, so I have to speak a lot of Telugu and use proper Telugu slang. It took me a lot more time and a lot more effort. Sometimes it was a hair-pulling experience! I would scratch my head and wonder why did I take up this challenge? I took it intentionally and wanted to prove certain things so I went the extra mile for that.

What are your future projects in Telugu?

I'm doing a movie with Ravi Teja under Siva (of Sowryam and Shankam fame). I will begin my Hindi film (the remake of Chashme Baddoor directed by David Dhawan) and both these films will run parallel from November to March.

I am getting more offers. It's just that we have only 24 hours in a day, 30-31 days in a month. So I am trying to balance things somehow to choose the best out of the options I have.