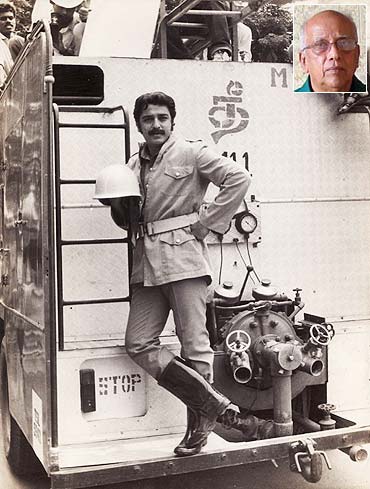 There's no stopping the drive and ambition of the veteran film-maker Singeetham Srinivasa Rao (inset) who has made film after successful film in Telugu, Tamil, Kannada, Malayalam and Hindi in as many genres as he could, from mythology to laugh-aloud comedies.

Right now, he's engaged in making a movie on the early years of Jesus Christ, with Pawan Kalyan as part of the cast and the project has garnered the interest of the international media.

Starting off with Neethi Nijayathi (1972) in Telugu, Singeetham went on to direct Dikkatra Parvathi (1973), America Ammayi (1976), Panthulamma (1977), re-defining the state of Telugu cinema.

He also made Niraparayum Nilavilakkum, a film in Malayalam, an experience which he found liberating. A chance meeting with Kamal Haasan, led them both to do Sommokadidhi Sokokadidhi (1978), a runaway hit.

Then began a new era, possibly one of the most successful movie-collaborations in South Indian movie history. Kamal Haasan and Singeetham went on to bring rollicking movies, filled with laughter and tears that would eventually go on to become cult classics like Raja Parvai (1981, also dubbed into Telugu as Amavasya Chadrudu), Pushpaka Vimana (1988), a film without dialogues that broke even more records, Apoorva Sagodharargal (1990), Michael Madhana Kama Rajan (1991), Magalir Mattum (1994), Kaathala Kaathala (1998) and Mumbai Express (2005).

Throughout, Singeetham always tried to push the envelope, to get to do something new. In 2002, he made Little John, with a mythological background while in 2008 came his multi media venture meant exclusively for children.

And lest you think he was concerned only with the making of a film, the man was an accomplished music composer as well. He composed the music for his Kannada films, Bhagyadha Lakshmi Baramma and Samyuktha.

With more than 50 years of glorious film-making, and many successful movies in his kitty, we celebrate Singeetham Srinivasa Rao by looking at some of his groundbreaking works. 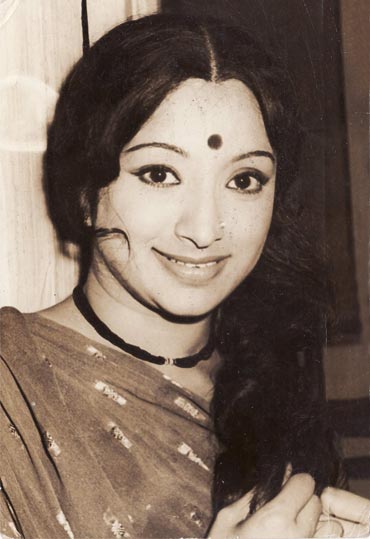 Image: A scene from Dikkatra Parvati

An adaptation of Chakravarthi Rajagopalachari's (Rajaji) short story, this film dealt with the benefits of temperance.

Singeetham, armed with Rajaji's prejudices about disliking films, asked for permission to film the story and mentioned the bias as well. Swiftly, Rajaji replied that it wasn't films as a whole that he disliked, just bad films.

The movie was made with Rajaji's blessing, even if he didn't live to see it. Starring Srikanth and Lakshmi, it went to achieve success, and won a National Award for its maker. 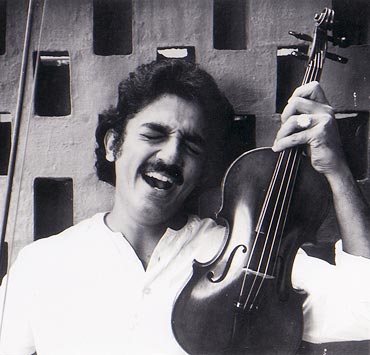 Image: A scene from Raja Paarvai

Raja Paarvai may have achieved little in the way of commercial success but this first production of Kamal Haasan and his 100th film received a good deal of critical appreciation.

The tale of a blind violinist who depends on no one to live his life and a young woman who is fascinated by him, the movie was a loose adaptation of Leonard Gershe's Butterflies are Free.

Still, Singeetham made it his own, with his distinctive touches.

The movie's musical score, by maestro Ilaiyaraja, delighted the hearts of hardcore music-lovers with beautiful numbers like Azhagu Azhagu and Andhi Mazhai Pozhigirathu.

This, together with Kamal Haasan's inspired performance and Madhavi's light-hearted work made it a classic. It was later dubbed into Telugu as Amavasya Chandrudu. 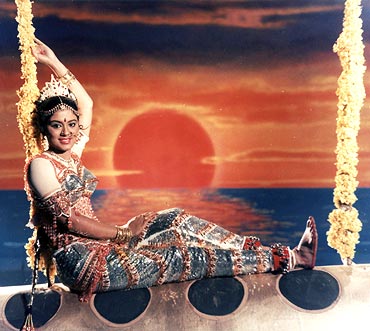 Image: A scene from Mayuri

Yet another of Singeetham's inspired works, Mayuri chronicled the real life incidents of Sudha Chandran, a danseuse who lost her leg in an accident, yet fought a mighty battle to dance again, using an artificial limb.

Dubbed in both Malayalam and Hindi, the film received rave reviews for portraying the heart-wrenching struggles of a young woman intent on living life the way she wanted to. 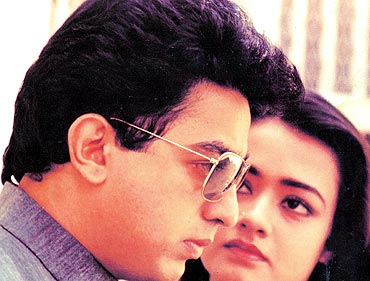 Image: A scene from Pushpaka Vimana

Not many had any idea about how successful a movie like this would become.

Pushpaka Vimana, made in Kannada, was a first in many ways. Though mistakenly referred to as a silent movie, it was, as Singeetham clarified, more a movie without dialogues, as there were enough sound effects in the movie itself.

Cleverly crafted with intelligent camera angles, a quirky story that combined tears and laughter, Pushpaka Vimana told the story of a penniless young man who plays rich to get the girl of his dreams but life has a way of interfering, and upsetting everything.

In the midst of the romantic mayhem is a sub-plot involving murder and betrayal, as well. Kamal was heaped with commendations for his superb portrayal; the film won the National Award for Best Popular Film, even wowing the Cannes jury. It was dubbed into Hindi as Pushpak. 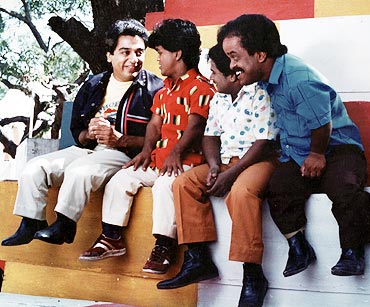 Image: A scene from Apoorva Sagodharargal

Identical twins: one short, one of medium height; one grows up in a circus, the other is a happy-go-lucky mechanic who falls in love quickly.

And then, they understand the truth about their past, their father's murder and the existence of each other. What follows is an endearing story of murder, mayhem, comedy and heart-tugging moments, all inimitably played by Kamal Haasan who, as is usual for him, did extraordinary homework to project the midget part of his roles.

Under Singeetham's very able direction, the movie blended mainstream cinema and emotion very well, broke many previous records of Kamal films, and marked the beginning of what was to be a long career, for Kamal Haasan, in getting more into the skin of his character, and setting higher standards for himself with the aid of superior make-up and body language.

The film was dubbed into Hindi as Appu Raja. 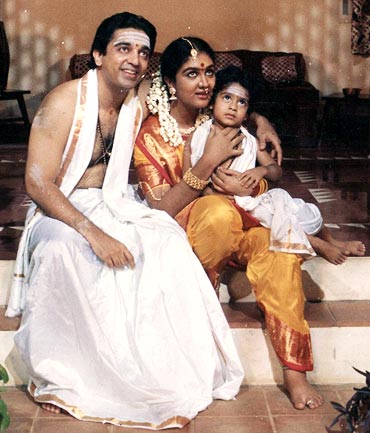 The next comic caper from the Singeetham-Kamal Haasan duo was almost identical to the plot of Apoorva Sagodharargal; only this time, there were four Kamals to contend with, and therefore, much more room for the actor to flex his acting chops.

This time around, the four brothers still lose their father, and each lived in ignorance of the other but all were as different from each other as chalk and cheese. One was an industrialist, another a Palghat Brahmin cook, the third is a firefighter and the fourth a conman.

This was yet another Singeetham trademark, with clever camera angles, imaginative manipulation of characters and sufficient emotional material and as expected, it brought the roof down. 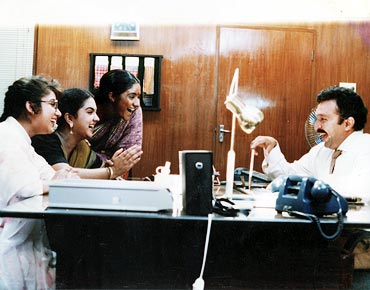 Image: A scene from Magalir Mattum

Inspired from the Hollywood hit Nine to Five, this movie had little of Kamal Haasan, but plenty of Singeetham's little touches.

Three women who are colleagues in a garment company, find their own ways to deal with their lecherous boss. One is a well-educated fashion designer, the other a clerk, and the last is a maid who cleans the office.

Each dresses, talks and acts according to their lifestyles but they unite unexpectedly, in dealing with a complication that's unique to themselves. In the process, they form a bond that eventually is the means of their salvation.

With seasoned actresses like Revathy, Urvashi and Rohini pitching into re-create perfect characters on-screen, Singeetham illustrated the genuinely frustrating problems of sexual harassment at work-places, dosing it liberally with contemporary life in Chennai, and women who manage work and home in their own, capable way. 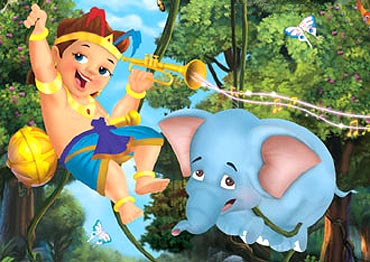 Image: A scene from Ghatotkach

Singeetham Srinivasa Rao was always known for trying to attempt something new  and this time, he went all out to direct an animation film with one of his favourite Mahabharatha characters as the lead: Ghatotkach.

He'd been enamoured with the character ever since he worked in Maya Bazaar with his mentor K V Reddy, and decided to direct his 2008 film in animation, meant especially for children. He scored the music as well. The movie premiered in the Cannes Film Festival, and garnered critical appreciation.

His latest is a film on the early years of Jesus Christ, to be made in the four southern languages, and perhaps dubbed in foreign languages as well.

To be filmed in foreign locales such as Jerusalem, Bethlehem, Jericho and Galilee, the film will have a whole host of Indian actors, and a contingent of devotional songs as well.

Telugu's power star Pawan Kalayan is a part of the movie, which is being produced under the aegis of Aditya Arts; the budget is USD 30 million.

Already, the movie has attracted the attention of the international media, considering that this is the first of its kind in Indian movie history, with filming happening on such historically significant locales.