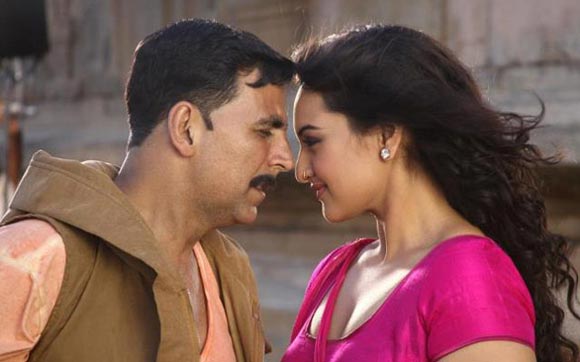 They say age is in the mind and you're as old as you feel.

As shallow as it sounds, general perception is while heroines do get old to romance a hero after a certain point, the hero never ages. And so the younger his leading lady, the better for it makes him cool and desirable in public eyes.

Shatrughan Sinha's pretty daughter is a few days shy from turning 25. But most of her heroes are almost double her age.

Be it the 40-something Salman Khan in Dabangg or the hero of her Friday release, Rowdy Rathore. The 1967 born Akshay Kumar is 20 years senior to the curvaceous Sinha scion but thanks to his fitness freak ways maintains a smashing appearance. 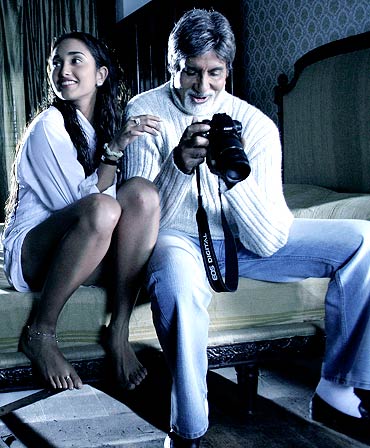 In the past too, the Big B romanced young heroines like Manisha Koirala, Shilipa Shetty and Tabu in films like Lal Badshah and Cheeni Kum but nothing quite beats the 46 years age difference between him and newcomer Jiah Khan in Ram Gopal Varma's Nishabd.

But, unlike many other films, the mismatch was deliberate and crucial to the unconventional romance. Again, Aditya Chopra's Rab Ne Bana Di Jodi is about a slightly mature, seemingly everyday guy who in wake of extraordinary circumstances gets married to a much younger woman.

Only in Bollywood 'slightly' translates to a whopping 23 years.

But the camaraderie between Shah Rukh Khan and Anushka Sharma was warm enough to make it click. They're working together again on Yash Chopra's untitled venture co-starring Katrina Kaif. 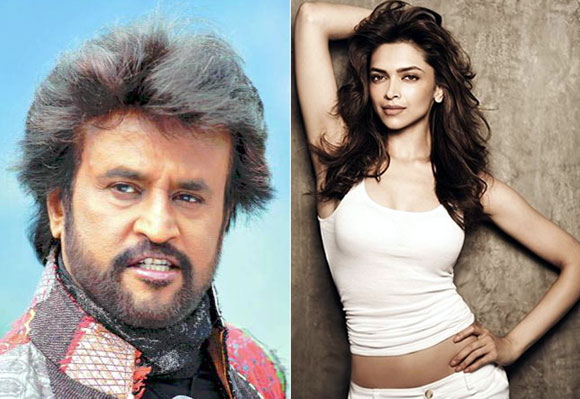 The model-turned-actress was barely in her 20s when she made her debut opposite Shah Rukh Khan in Om Shanti Om.

But her leggy poise lends her enough wisdom, insist industrywallahs, to next romance superstar Rajnikanth in Tamil period fantasy, Kochadaiyaan.

What makes this casting bizarre is that the Endhiran hero is not just seriously senior to Deepika, he's five-years-older than her sportsman dad, Prakash Padukone as well. 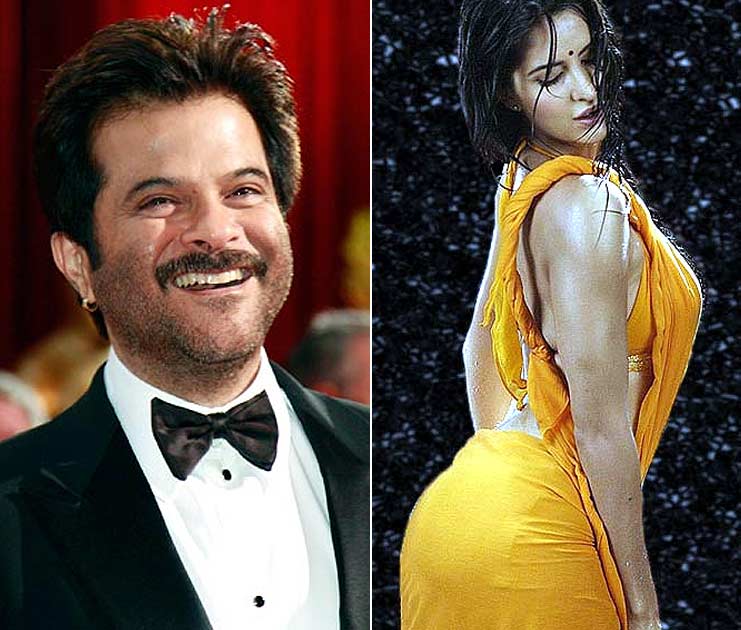 While fashion forward daughter Sonam is busy carving a niche for herself in tinsel town, dapper daddy Anil Kapoor, 52, is busy romancing hotties half his age ranging from Bipasha Basu, Lara Dutta (No Entry), Mallika Sherawat (Welcome), Kareena Kapoor (Bewafaa) including a 20-something Katrina Kaif, whom he weds briefly, in the Akshay Kumar starrer Humko Deewana Kar Gaye. 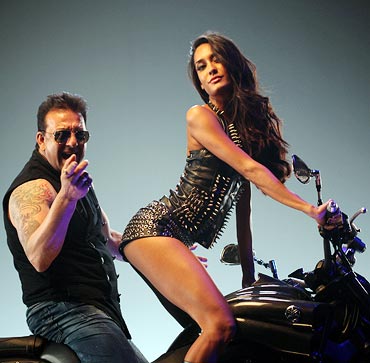 Sanjay Dutt, now in his early 50s, received a lot of flak for working in the daft comedy Rascals, which is high on innuendoes and skimpy 24 year-olds Kangna Ranaut and Lisa Haydon.

Dutt, let's face it, has lost a major chunk of his 'deadly' edge and needs to get in shape. No wonder he's decided he's better off playing father/elder brother to Sonakshi in the upcoming Son of Sardar. 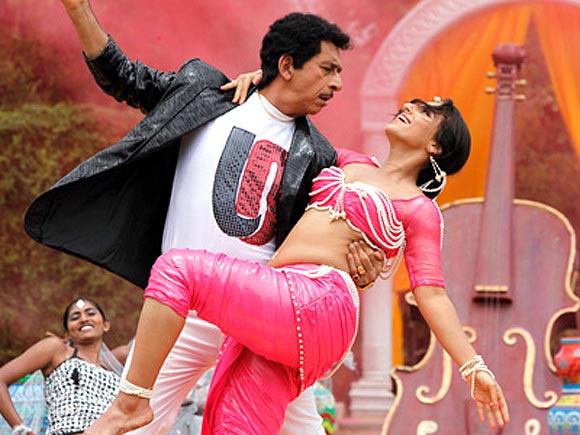 Image: Naseeruddin Shah and Vidya Balan in The Dirty Picture

After tying the knot with Priyanka Chopra in a traditional Bangla wedding in 7 Khoon Maaf, Naseer engaged in some hardcore raunchy moves alongside Vidya Balan in The Dirty Picture to depict the kitschy era of 1980s Bollywood.

The 28-year gap between him and his Ishqiya co-star was never this glaring. 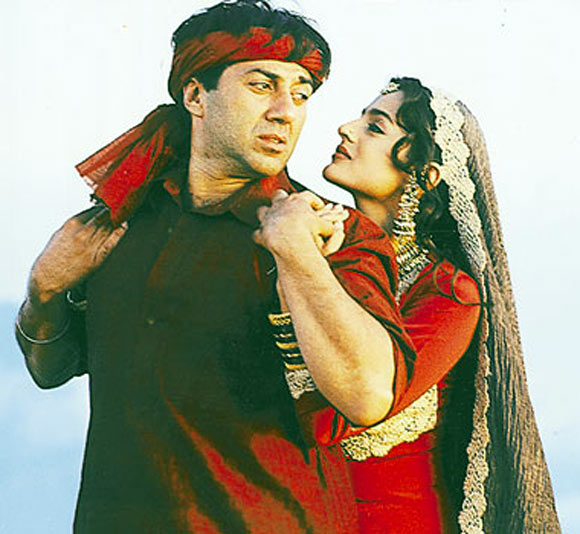 When 1956 born Sunny Deol falls for the 1979 born Amisha Patel in Gadar: Ek Prem Katha, people are too busy admiring the muscleman's forceful punches and kicks to note the disproportion. 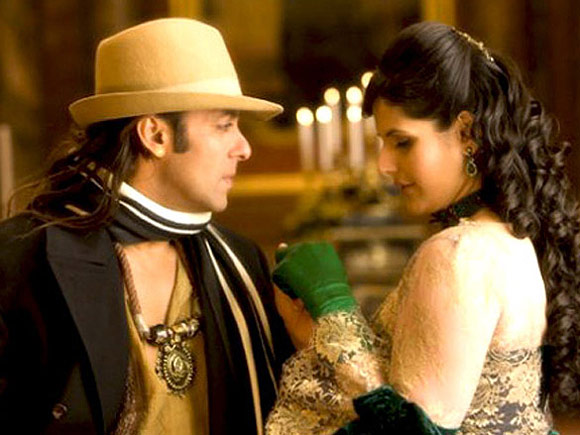 He may be controversy's favourite child.

Although currently the mantle is safe with friend-turned-foe, Shah Rukh Khan, but Salman Khan's maintained an enviable youthful disposition.

No wonder whether the 46-year-old's dating a 20-something in real life (former girlfriend Katrina Kaif) or reel (her alleged lookalike Zarine Khan), no one seems to mind so much. 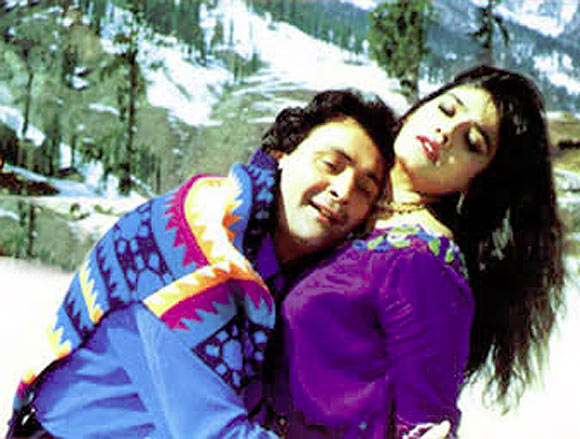 While son Ranbir Kapoor has no qualms about working with women a tad older than him like Konkona Sen Sharma (Wake Up Sid) and Nargis Fakhri (Rockstar), daddy Rishi extended his run as the eternal loverboy vying for the romantic attention of his niece Karisma Kapoor's peers like Raveena Tandon, Pooja Bhatt and Divya Bharti.

Incidentally, Tandon who watched Chintu on the sets of her director dad Ravi Tandon's Khel Khel Mein harboured a huge childhood crush on the star.