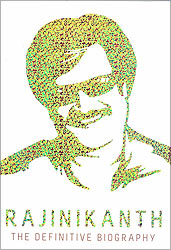 Prev     More
One of the guest lecturers at the institute was the esteemed director Kailasam Balachander, a man who with one snap decision would change young Shivaji's life forever.