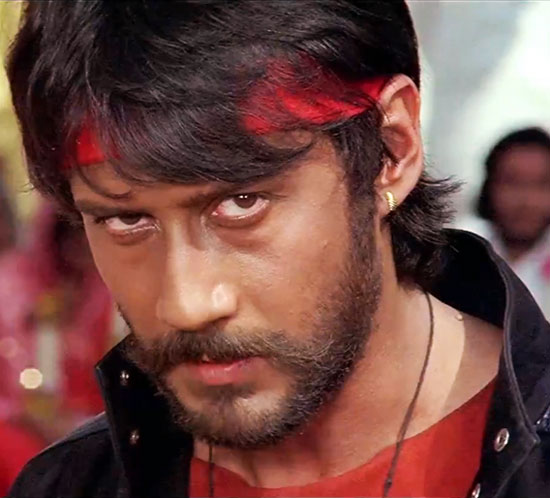 In this special series, we re-visit great Hindi film classics.

No barrier of society, clans, class or creed can stop two people from falling in love.

Ah, if it isn't the quintessential Bollywood fantasy!

Judge it for all you want, but this chaotic expression of creative free will has proved its worth in gold for the best (and worst) of filmmakers.

And so this week I decode the merits (and gaffes) of the classic theme retold through Subhash Ghai’s flamboyant filmmaking in 1983’s box office smash, Hero, which made stars out of Jackie Shroff and Meenakshi Seshadri after lacklustre beginnings (in Swami Dada and Painter Babu respectively) and conferred the rhyme Ding Dong O Baby Sing-a-Song (featuring the director in a blink and miss cameo) an epic stature.

Interestingly, the love story owes part of its existence to Kamal Haasan.

Sick and tired of chasing the Southern Superstar for dates, Ghai decided to scrap the project and came up with idea of Hero. 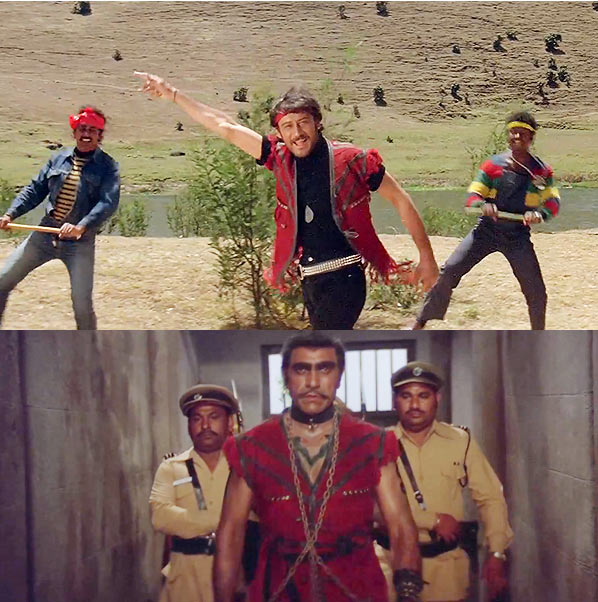 With a title like that, one expects certain degree of swagger. And Ghai doesn’t disappoint.

Jackie Shroff makes his entry by showing his back to the screen.

Only to pop before it with a sleek close-up, sharp long shot, bashing up a grotesque baddie named Billa to validate the film’s title to the hilt.

I didn't watch it in a cinema hall but I can certainly imagine the pulsating applause permeating single screens in its glory days.

But, before that, a chained, handcuffed Amrish Puri walks down the narrow prison corridors sporting a menacing scowl, bushy brows and blingy choker (the kind Zeenat Aman wore in Yaadon Ki Baarat?) in a scene that finds an echo in Sanjay Dutt post-arrest stride during the opening credits of Ghai’s Khalnayak.

As the go-to filmmaker for all things Dhina-dhin-dha during the fecund Eighties, his Hero is unabashedly bombastic, kitschy and melodramatic in its sensibilities.

Hero's charm lies in its rawness and nostalgia 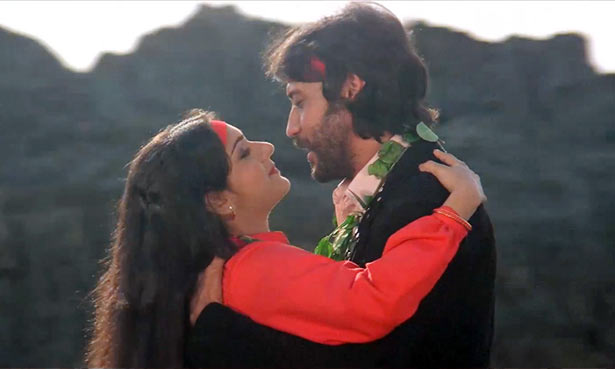 Despite the excesses and errors, Hero’s charm lies in its rawness and nostalgia.

In the age of touch phones with gazillion apps, it’s tickling to see goondas lug around a bulky tape recorder to document evidence, a sinister looking Shakti Kapoor unleashes a VHS tape with pre-recorded footage of a wounded Jackie in the hospital to torment Meenakshi and even the baritone proud Amrish Puri has to holler out his devious schemes to be heard over a long distance phone call.

Amusement on witnessing outmoded technology aside, Hero is, at heart, full-on fun, unpretentious and disarming.

There’s nothing prepped up about Jackie and Meenakshi’s presence or personality -- what you see is what you get. It’s this unfeigned freshness that makes their flaws excusable.

Though a modestly budgeted romance when compared to Ghai’s lavishly mounted multi-starrers, Hero makes up for the absence of fancy production values with its striking, nature-embracing outdoors. (With Karz not doing too well, Ghai wasn't able to gather huge finance and turned producer with this film.)

During one such wild racing competition, Ghai's product placement proficiency flourishes to accommodate the virtues of Rajdoot 350.

Clearly, the man always has a flair for such things. Remember Taal’s Coca Cola and Paas Paas in Yaadein? 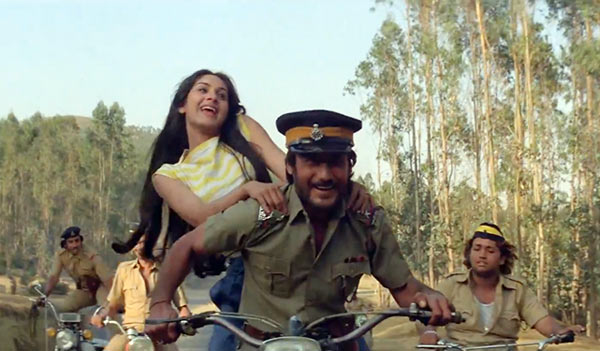 Hero is a ‘poor guy falls in love with rich girl’ story but with its share of intriguing twists.

Jackie aka Jaikishen (Shroff) is the proverbial orphan taken under criminal Pasha’s (Puri playing along like only he can) wing who grows up to become a local dada.

Regardless of his scruffy beard, hostile manners, badass red headband and daredevil bike riding, Jackie is basically Shrek before Fiona.

Along with his motorcyclist gang, he’s assigned by an imprisoned Pasha to intimidate an honest albeit arrogant retired cop (Shammi Kapoor essaying the obstinate obstacle both here and 1983’s other release -- Betaab) and kidnap his daughter Radha (Meenakshi Seshadri) in retaliation to his sentence.

Only Radha, the perennially gullible 1980s heroine, is easily duped into believing her captors are covert police officers.

So instead of the mandatory ‘bachao,’ she breaks into a gorgeous Laxmikant-Pyarelal melody, Nindiya Se Jaagi Bahaar in Lata Mangeshkar’s faultless rendition.

It’s not hard to see why Ghai picked Meenakshi for the part.

He was won over by the former Miss India’s traditional face and classical dancing prowess, which is amply displayed (in Saroj Khan’s intricate steps) at every opportunity (even atop a giant tabla). 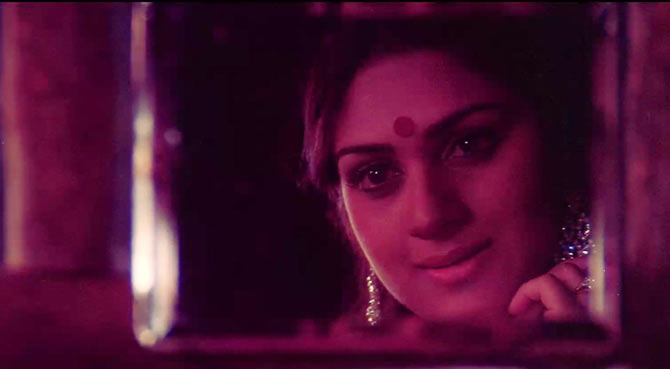 The camera (through Kamalakar Rao’s brilliant handiwork) responds to her favourably, whether capturing her expressive eyes and big bindis in close-ups or romping around vast landscapes in tacky 80s styling.

When she discovers the truth about his identity, her shock lasts for not more than ten seconds. What matters to Radha is Jaikishen>Jackie and he display this golden side to everybody (basically Shammi Kapoor).

The actor, who worked with Ghai previously on Vidhaata, is priceless in the scene where Meenakshi delivers an emotionally charged dialogue, "Warna mein kunwari hi vidhwa ho jaaongi" and a stunned Sanjeev Kumar spontaneously falls off the chair. 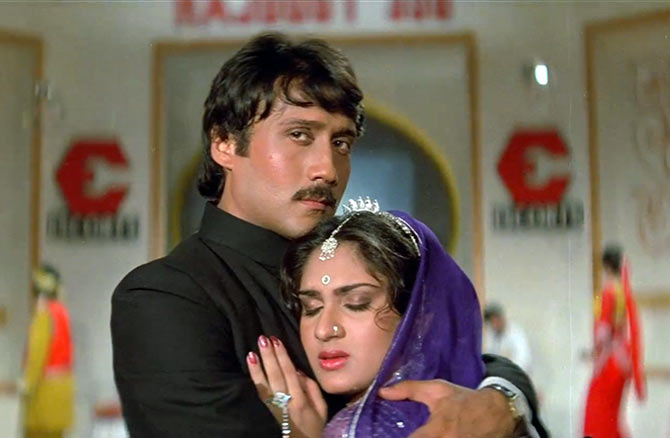 While Jackie/Jaikishen is locked up in prison for two years, enters Prince Charmless (Shakti Kapoor is reliably vile, especially in one disturbingly violent stabbing scene) as Radha’s fill-in fiancé till he is released.

The erstwhile showman heard the Pakistan folk singer perform at Raj Kapoor’s private party and was mesmerised by her rendition.

His keen ear for music helps him extract lilting tunes like Tu Mera Jaanu Hai, Pyaar Karnewale Kabhi Darte Nahi and Mohabbat Yeh Mohabbat (besides the one I mentioned earlier) from his then regulars Laxmikant-Pyarelal against Anand Bakshi’s snappy lyrics.

The soundtrack of Hero -- apart from making some sturdy use of Manhar Udhas -- lends Jackie and Radha’s romance heft and intensity. 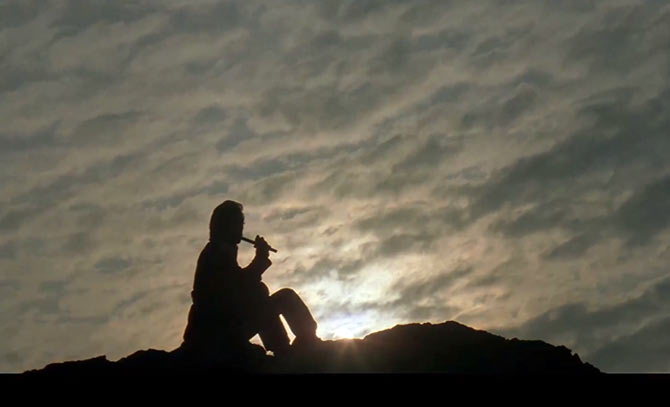 Image: A scene from Hero

Once Jaikishen comes out of jail, he "shines up like a new penny" what with the beard, bands and punk jackets making way for "good boy" shirts and jeans.

Even his histrionics are laced in restraint, an attribute he’s developed rather deftly through the course of his erratic career.

A lot has changed in the last 30 years.

Jackie’s son Tiger is gearing up to make his acting debut.

Salman Khan wants to remake Ghai’s film with new faces. Meenakshi is a happily married, mom of two, running a dance school in the US.