On March 25, Charu Khandal had a near fatal accident when an alleged drunk driver rammed his car into the autorickshaw she and her friends were in.

Charu, who was in the visual effects team of Ra.One, had been celebrating her National award win, when disaster struck. Nishi Tiwari visited Charu's family in Kokilaben Ambani hospital to see how they were coping.

Charu Khandal is having trouble sleeping at night.

After meeting with a near-fatal accident that left her immobile neck down on the night of March 25, the 28-year-old animator has been bed-ridden with a severe spinal chord injury in the Intensive Care Unit of Kokilaben hospital in Andheri, a western suburb of Mumbai.

The floor she is in is off limits -- only hospital staff and a relative is allowed to be up there at a time -- and hence is eerily peaceful. Charu has told doctors that she gets scared at night and can't sleep. Her younger sister Ritu was talking about Charu's discomfort to their mother when they came over to the visitor's lobby to meet me.

Ritu's dressed in a bright green top, sports a casual bouffant-like hairstyle and is wearing oversized sunglasses even though we are indoors. It's only when some of her friends -- waiting to see Charu and their friend Vikrant Goyal (who was also in the accident) -- walk up to us and inquire about her well being that I see the reason behind the shades.

'We are trying to keep our emotions in check' 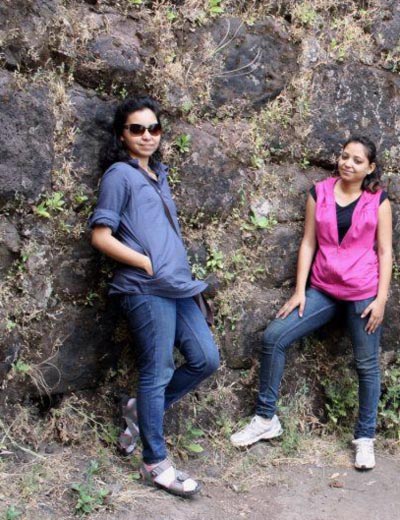 Ritu gingerly removes her shades to reveal her eyes. They are severely blood-shot and the skin around them has turned black and blue due to blood-clotting from the accident.

Despite her own discomfort and having been in a serious accident, Ritu is as sprightly as any regular 25-year-old. She talks animatedly about her older sister and tells her mother she'll arrange for some music for Charu since she gets bored, lying in the bed all day.

Her mother, who instinctively reaches out to stroke her second daughter's head as she talks to me, appears calm but Ritu says it's a facade.

"All of us are trying to keep our emotions and facial expressions in check. If she so much as gets a hint of distress on our faces, she'll get worked up," Ritu tells me while making sure from the corner of her eyes that her mother's not looking.

'Our father doesn't tell people how grave her condition is' 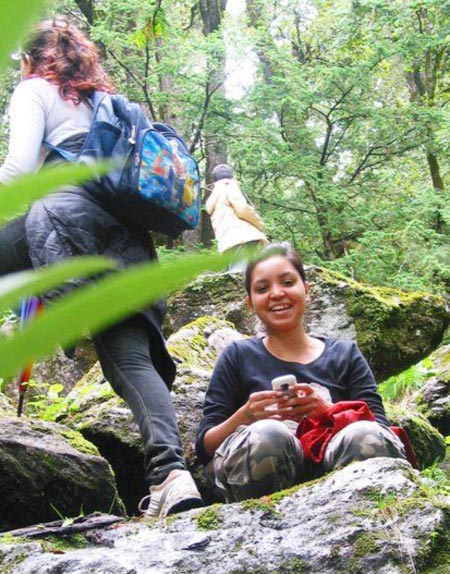 28-year-old Charu Khandal, who's been working as an animator with Shah Rukh Khan's Red Chillies Entertainment and was part of the National award-winning Ra.One team, is the eldest of Ashok Khandal's four kids.

58-year-old Khandal is a chemistry professor who teaches at Careerpoint -- a coaching institute -- in Jaipur.

Ritu, 25, who lives with Charu in their Malad flat (in suburban Mumbai), works for Holiday Inn as a sales manager.

His third child, Neha is currently doing her Masters in French in Pondicherry.

The youngest -- 18-year-old Ashish -- has just got admission in his first year of engineering at BITS Pilani.

Ritu describes her older sister as a 'typical Sagittarian'. "Di is very artistic and loves to spend time alone," she says.

"She absolutely loves her job and is a workaholic. She didn't take any breaks while working on Ra.One. She worked even on weekends. Even in this state, she can't stop fretting about what will become of her job. We have to often remind her that her top priority should be to fully recover. She's strong and optimistic like our father (who's gone back to Jaipur for some urgent work), he doesn't tell people how grave her condition is when they ask. According to him, just a 'she's fine' suffices." 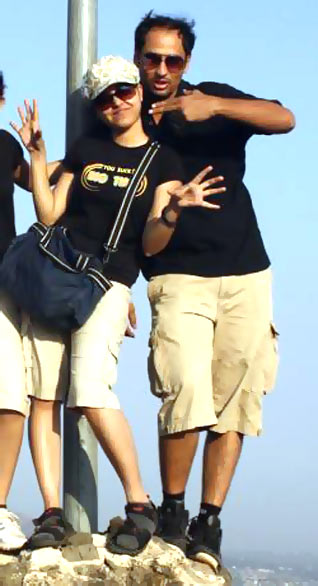 Described by friends as adventurous and full of life, Charu always wanted a career that would let her showcase her artistic side. After completing her Bachelor of Business Administration (BBA) from a Jaipur college, she enrolled for an animation course and got her first job when Ketan Mehta's production house Maya Entertainment Limited hired her as an animator.

The job first took her to New Delhi and then brought her to Mumbai.

Sagar Thackar, Charu's fiance, says, "Everybody is looking for the next level of opportunity to move up in life and Mumbai is that next level. So that was a natural progression for her as well. She loves living in Mumbai and wanted to get the most out of it."

Sagar, who's an animator himself, talks in measured words. He hails from Surat and has lived in Mumbai for the past eight years. He met Charu through common friends and they instantly hit it off.

"We had a lot in common. We love taking off for weekend getaways. We used to go sailing, trekking a lot," he remembers fondly, with only the slightest hint of smile on his face.

'We wait everyday expectantly for updates from the doctors' 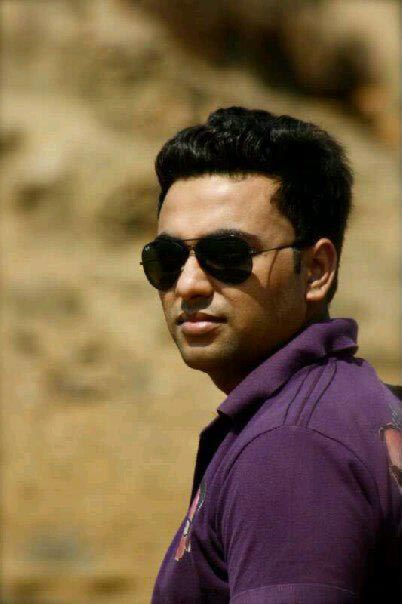 Thackar was among the first people who rushed to the accident site and took Charu to the hospital. He's been on his feet ever since -- meeting doctors, keeping tabs on every minor improvement or requirement, managing the unforeseen expenses along with Charu's father and receiving friends, visitors who come in to check on Charu and Vikrant.

Although Charu and Vikrant have suffered similar injuries, Vikrant's condition is not as grave as Charu's. He is already responding to physiotherapy and will recover fully in due course of time. It is Charu everybody is holding their breath for.

"Everyday, we stand near the doctors' doors, expecting to hear an encouraging word, hoping the doctors will say that she's making considerable progress. They've said they can't give daily updates but will still manage and keep us posted about every little development," Sagar says wistfully.

The surgery that Charu underwent on Friday was carried out without any glitches. Neurosurgeon Dr Anandh Balasubramanium and leading spine surgeon Dr Mihir Bapat performed the operation to insert metal plates in Charu's broken neck bones. 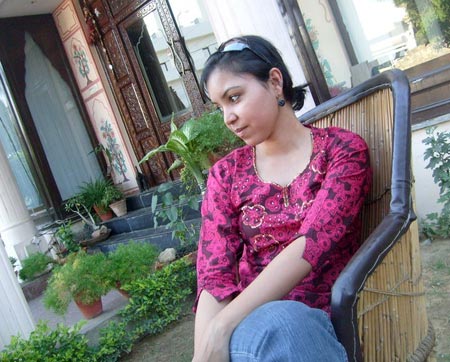 Dr Bapat uses a spinal chord replica on his desk to explain what happened to Charu's bones in the accident. "The third, fourth and fifth cervical bones in her neck got fractured in the accident and, in turn, severely injured the spinal chord," he says.

It's because of the injured spine that she's having difficulty breathing and is paralysed indefinitely. Dr Bapat apprises us of the current situation, "We have fixed the bones through surgery but the spinal chord has to recover by itself. All we can do is wait. It could take from six weeks to three months but the chances of full recovery are miniscule," he says.

But there's still hope. A complex physiotherapy regime has been put in place for her to maintain lower and upper limb movement and to avoid bed sores; she's being made to sit up with support and has even been transferred to a wheelchair as party of the exercise. She's able to breathe on her own and has been on and off of the ventilator.

"But she has to be taken care of like a baby until her spinal chord recovers," Dr Bapat reiterates. 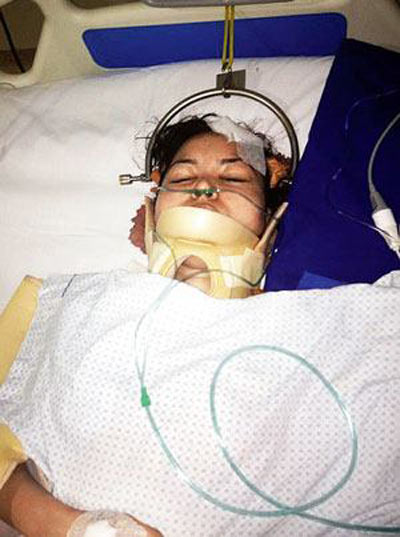 Today is the tenth day since the accident and no one knows how long she will be in the hospital. That means mounting bills and other expenses.

But Sagar is unperturbed.

He says, "We are managing as of now with the two families coming together. When it goes beyond our means, we'll look for other ways to fund the treatment."

Over Rs 6 lakh have already been spent in the last 10 days, with Rs 3-4 lakh going in the last week's neck surgery. It's just the beginning of a long ordeal for Charu and her family.

Sagar, who visited his family doctor in South Bombay earlier in the day for a second opinion in both Charu and Vikrant's cases, is sure Charu will get back on her feet.

He says, "Our top priority right now is to get her back on her feet. The wedding will now be on a smaller scale. We'd initially planned a big, lavish ceremony. That's not happening now."

Meanwhile, no one has any idea where accused Manoj Netrapal is or what he is doing.

Ritu says, 'We are all pre occupied with di and the last we heard of him was when he was granted bail. Vikrant was taken to the Cooper hospital in his Honda City after the accident. Why his breath analyser test wasn't done right away in the same hospital beats us."