Few can dazzle the screen with a smile as bewitching, a movement as lithe and a charisma as incontestable as Madhuri Dixit.

From the naive newly married in Abodh to the furious feminist of Gulaab Gang, the actress steadily graduated from a promising newcomer to an iconic figure in her three-decades long career. The spell her stunning face, poised dance and persuasive histrionics cast on Bollywood and its followers is far from broken.

The star of Ek Do Teen, Dhak Dhak and Maar Daala turns 47 today, May 15. And what better way to celebrate her special day with 47 memories of her countless looks in the movies?

As the luxury-accustomed Begum, Dixit represents the decadent facet of high society in all its superficiality and splendor in an avatar that evokes nostalgia and poetry. Madhuri drapes herself in a strictly pink wardrobe teamed with striking handloom print blouses to convey girl power and take on Juhi Chawla in the author-backed role of Rajjo. 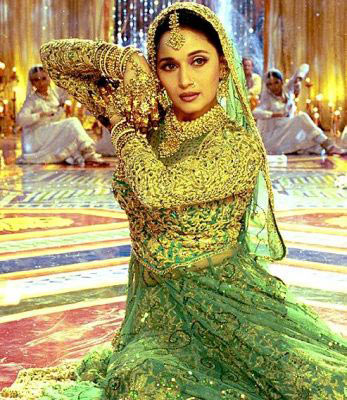 Costumes are the heart of Sanjay Leela Bhansali’s cosmetic interpretation of Devdas and Madhuri lends the intricately embellished designs of her wardrobe a real touch of grandeur and sparkle. Mads brings the house down in her teasing ghagra alongside a gleeful Ranbir Kapoor to deliver the talked-about item song in Ayan Mukerji’s second film, Yeh Jawaani Hai Deewani. 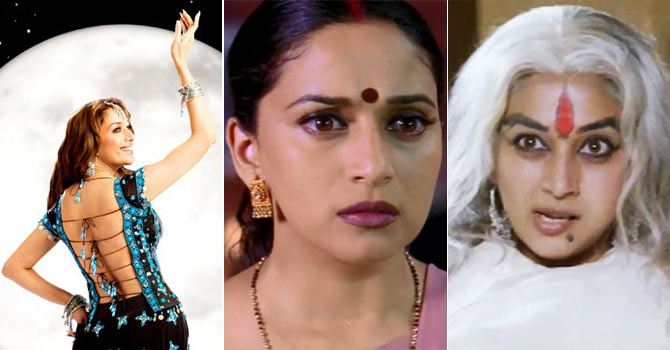 After a long hiatus, Madhuri returned to the big screen with a bang and a befitting invitation, Aaja Nachle in a role designed to showcase her greatest strength -- dance.

As the incorrigible prankster and main draw of Raja (starring Sanjay Kapoor in the titular role), Dixit engages in all kinds of inanity.

And one of them involves her turning into an inflated, witchy, white-haired creature. 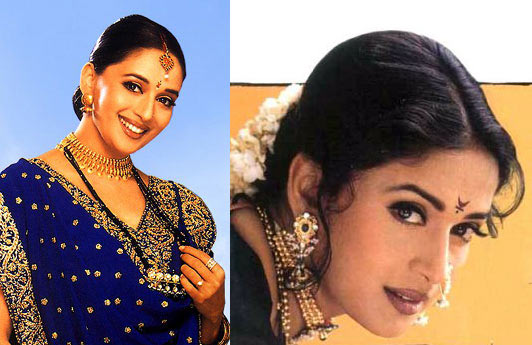 Madhuri demonstrates a typical case of Bollywood-styled amnesia in a melodrama best remembered for her lovely saris designed by Ritu Beri.

Ever the enchantress, Madhuri breathes life into M F Husain’s paintings in the indulgent, experimental and cryptic ode to her classic Indian beauty.

Image: Madhuri Dixit and Manisha Koirala in Lajja, Madhuri in Pukar and Mohabbat

Rajkumar Santoshi’s Lajja explores various issues of crimes against women in his thought-provoking drama where Madhuri’s village nautanki star steals the scene with her power-packed intensity.

From fun loving to dark to remorseful, Madhuri’s character experiences a sea of emotions in Pukar and her changing appearance in the film reflects the difference suitably.

Even Madhuri’s delightful screen presence isn’t enough to lure the audiences for this Mohabbat-free fare.

Playing the traumatised village belle in Rajiv Kapoor’s Prem Granth didn’t enthuse the box office but Madhuri appeared ravishing as ever in her creative costumes and accessories.

Despite Madhuri’s best efforts to look trendy in a cropped denim shirt and ghagra and her chemistry with Shah Rykh Khan, Rajesh Roshan’s Koyla failed to set the box office on fire.

Rajkumar is a perfect showcase for Madhuri Dixit’s underrated attribute as a stylist’s dream. The star rocks all sorts of adventurous make-up essaying a princess in this Robin Hood-reminiscent fantasy.

In yet another remake of Sleeping With The Enemy, Madhuri sports a funny blonde wig to stay inconspicuous. Looks like that plan backfired.

Not many actresses represent the cause of women like Madhuri Dixit.

In the critically acclaimed Mrityudand, she single-handedly takes on the chauvinistic elements of Bihar’s rural region with impressive grit and dynamism.

Madhuri Dixit in a crystal studded purple sari is quite easily the first image that pops in mind at any mention of the biggest hit of her career.

From air hostess to avenging angel, Madhuri goes through bizarre extremities in abundance in the gory revenge drama, Anjaam.

Technically, she plays a no-nonsense cop in the Subhash Ghai flick but an enduring image of MD is, obviously, wiggling to Choli Ke Peeche.

Madhuri plays a sweet pahadi girl in the tradition of Hema Malini in Kudrat and Mandakini in Ram Teri Ganga Maili who catches the fancy of a vile Thakur in this old-fashioned triangle. 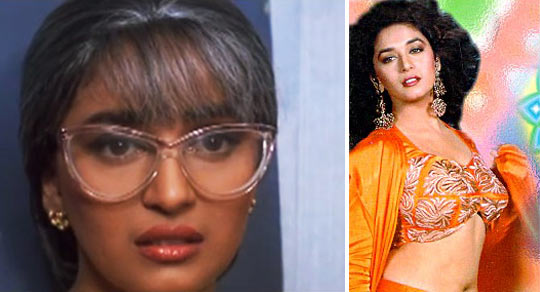 Though the rom-com didn’t work, Madhuri is cute as a button in her silver haired bun and vintage glasses juggling between Salman Khan and Anupam Kher’s affections.

Playing the gutsy new bride who responds to her nasty mother-in-law’s atrocities in kind, Madhuri slips effortlessly into her character. And even finds time to share her raunchy Dhak Dhak moves.

Playing Om Puri’s fantasy (and a million others), Madhuri Dixit, dressed in all red, embodies the ultimate dream come true with her trademark laugh and attractive flirting.

Madhuri Dixit takes the role of a serious cop quite seriously in an otherwise not so serious movie called Prem Deewane, which despite its amusing content flopped.

Before she slips into the habit of drugs, Madhuri oozes oomph like only she can to entice her frequent co-star, Anil Kapoor in this desi Scarface.

And a big shout out for the hottest thing about the movie -- Ms Idlidoo!

Madhuri plays a double role of mother and daughter in the poignant Sangeet. It’s her restraint in the senior avatar in what made viewers first realise the extent of her calibre.

The whodunit relies on Madhuri’s star power and vulnerability to keep us on tenterhooks and no prizes for guessing how well she delivers.

Hema Malini’s over-the-top, controlling mother is the focus of Jamai Raja’s developments but lending it glamour is Madhuri, who plays her equally defiant daughter.

The actress sports a no make-up look to play a bereaved army man’s Catholic fiancée in Nana Patekar’s hard-hitting Prahaar.

Aamir Khan is part photographer, part stalker whereas Madhuri Dixit his model and muse in this crazy romance best remembered for its breezy title track featuring our lady in a burgundy brocade blouse and yellow chiffon sari.

A non-dancer like Sanjay Dutt too turns dancer in Madhuri’s magical company for the hit dance track, Tamma Tamma Loge in Thanedaar.

Madhuri Dixit dons the garb of a sexy koli dancer in one of her most copied avatars of all time for the Sailaab chartbuster, Humko Aaj Kal Hai Intezar.

The actress pulls off a two pony-tailed look without a fuss to play a college goer constantly sparring with Aamir Khan in Dil.

Subhash Ghai’s heroines are as ‘shuddh desi’ as they get. And Madhuri fits perfectly in his vision as the demure, desi Radha of Ram Lakhan.

A sari-clad Madhuri won favourable reviews and a Filmfare nomination for her strong performance in Prem Pratigya.

She may be of pure ornamental value in the multistarrer but it’s quite a treat for Tridev buffs to watch her sashay to the beats of Oye Oye.

When Madhuri Dixit danced to the iconic Ek Do Teen, little did she realise the countdown to her phenomenal success has just begun. The rest, as they say, is history.

A pretty Madhuri teamed up with Jackie Shroff and Rajinikanth in the South versus North face off, Uttar Dakshin.

A teenage Madhuri made her debut as a petulant young bride coming to terms with the concept of marriage and intimacy in Rajshri’s Abodh. Lousy make up and traditional saris couldn’t conceal the star she was destined to be.