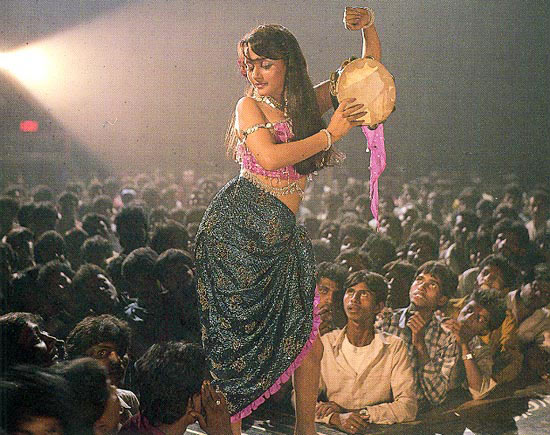 What's the first visual that pops up in your head when you think of one of Bollywood's most adored heroines?

The famous 'million-dollar' smile? Her shimmering brown eyes? Or that slender, graceful frame careening to the sound of glitzy Bollywood music?

All of the above?

She's worked in more than 50 films for nearly three decades, ruled the roost, called the shots, left the industry to be a NRI wife and mom, made a comeback into the industry and India and embraced television but the charisma of Madhuri Dixit is relentless and synonymous with her dancing prowess. Her trained skill set (as a proficient Kathak dancer) and inherent ability to marry technique with impulses and allure has created a formidable oeuvre of dances to support and study.

The actress turns 45 today. Join us in celebrating the star and her magic with this compilation of her 25 hottest dance numbers.

It's been more than two decades since Mohini enlightened us with the Ek do teen of romance but neither the chartbuster nor its spirited dance has lost an ounce of its original charm. Tezaab turned her into an overnight dancing sensation and it's been quite a romp since. 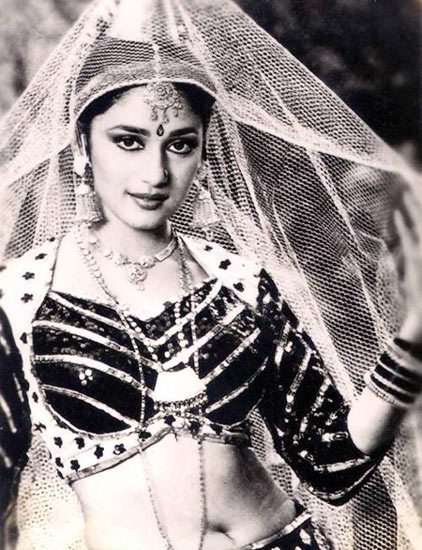 Although her Radha was not a major character in Subhash Ghai's melodrama about two brothers and their wronged mother, Madhuri contributed immensely in the glamour department with her two solo dances.

While some applauded her subtle nuances in the classical O Ramji, others went gaga over her blend of intricate moves and effective aggression in Bekhabar Bewafa. 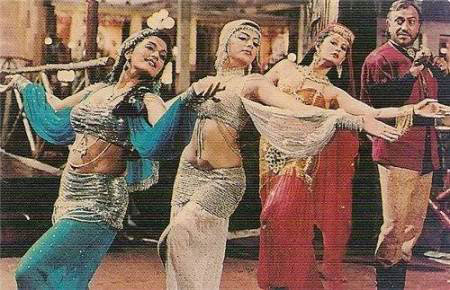 We haven't seen her act in too many multi-starrers but Rajiv Rai's Tridev was a fun exception.

Two bit role aside, Madhuri sparkled in transparent harem pants along with leggy starlets Sonam and Sangeeta Bijlani only to steal the show with her obviously polished dancing skills in this hugely popular pre-climax song. 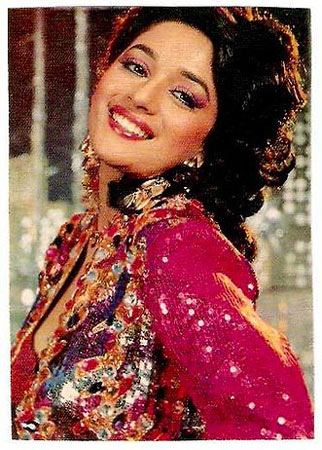 The duo pays a tribute to their favourite matinee idols in this entertaining mix of erroneous break dance, desi jhatkas and snazzy expressions. 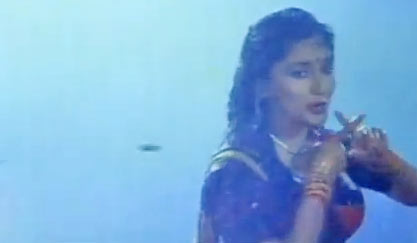 Trust the actress to bring life into the most done to death on-screen situations. 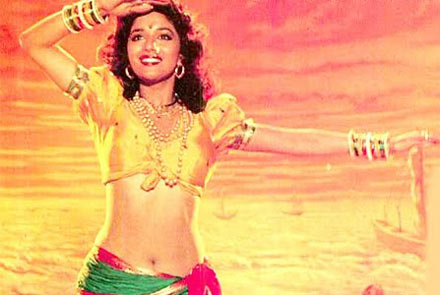 The koli girl has *never* looked this hot.

From Antara Mali in Main Madhuri Dixit Banna Chahti Hoon, Katrina Kaif's Chikni Chameli in Agneepath to Chitrangada Singh's upcoming item song in Shirish Kunder's Joker, many others have tried to find success doing the same but no one comes close to the real deal. 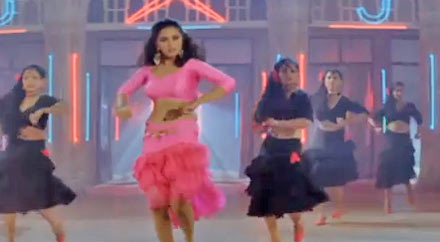 A typical boy-meets-girl romance, which starts out on a wrong foot and culminates into an intense, unbreakable bond, Dil was a roaring success with the young crowd.

In a bid to sell even more tickets, the producers then added a new song, Dum Dumma Dum and re-released prints.

And that's when you see a plucky Madhuri take on a smug Aamir Khan in the war of moves. 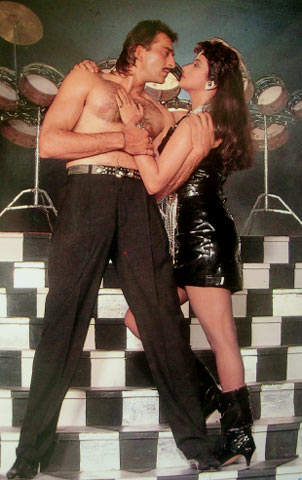 Bappi Lahiri's Tamma Tamma Loge is a blatant rip-off of Mory Kante's Tama Tama but that's a technicality you're willing to overlook for a few minutes while watching the contrast between Madhuri's high-energy albeit effortless shimmy as opposed to hero Sanjay Dutt's labored ones in its glittery visual.

Most commendable is their co-ordination in the steps involving a chair towards the end. 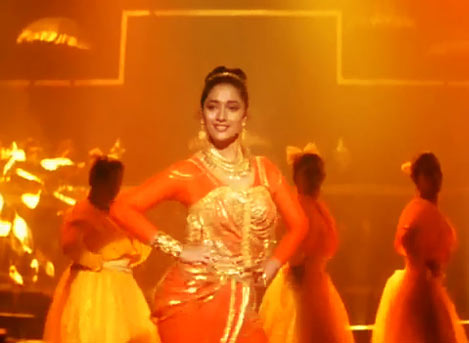 Perhaps all that power dancing proved to be too much for Dutt and he relegated himself to clicking pictures while Mads took the stage on fire in Saajan's lilting melody, Tu Shayar Hai.

The gorgeous star slips into an array of glitzy costumes and moods to convey the exultant, smitten state of her Pooja. 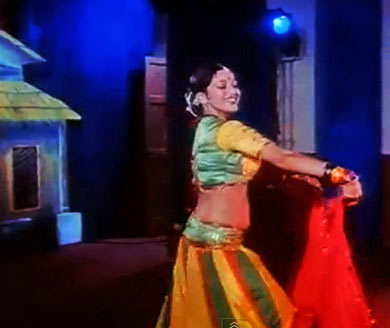 If you can get past her excessive show of midriff in the deliberately suggestive nautanki number, Main Tumhari Hoon, Sangeet is one of the most underrated films of Madhuri's career.

The actress plays a double -- a suffering, melancholic mother and her blind, trusting daughter in K Vishwanath's Sangeet. 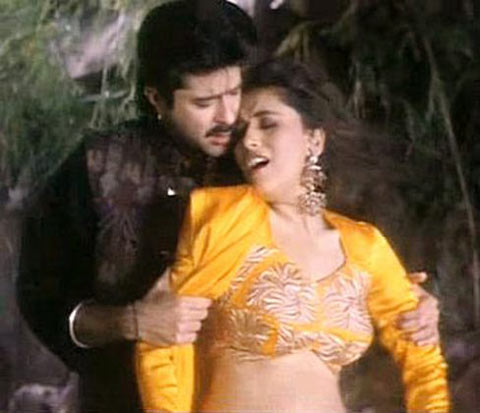 The one where she turned into Dhak Dhak Dixit.

In Beta, the actress played a self-assured character not just when required to stand up against the tyrant mom-in-law.

She was assertive about her sexuality as well. Notice the conviction in the smooth gyrations of her willowy figure and come-hither expressions? 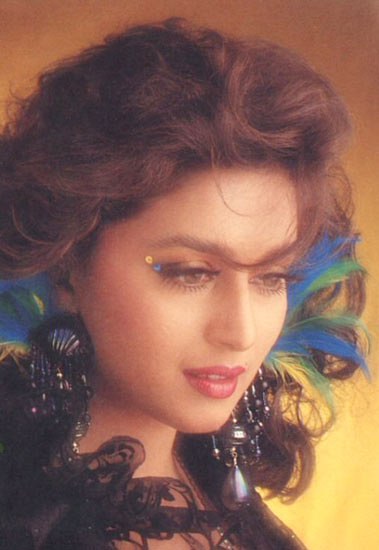 How to dance like a dream in a super tight costume?

As a con artist using her inviting good looks to dupe gullible males, Madhuri turns the heat on with her slinky dress and saucy pose demanding the moon and milky way in this catchy ditty from the box-office blooper, Khel. 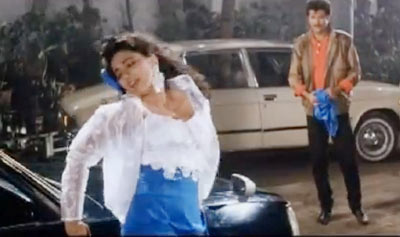 Our lady goes all out to serenade the awestruck hero with her sensual shimmy and XL earrings in Asha Bhosle's enticing tone amidst a bunch of bored cars and indifferent fountain.

Silly inanimate creatures, what do they know? 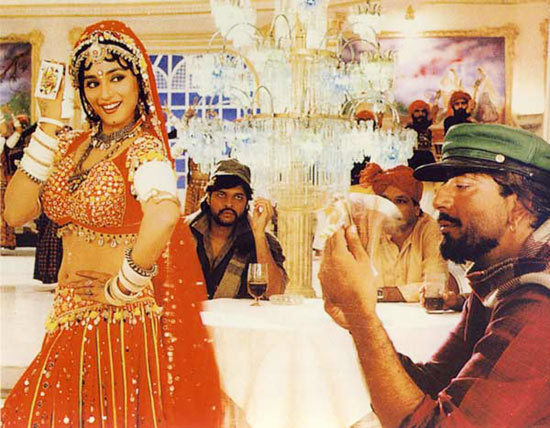 Nonetheless, the song from Subhash Ghai's film went on to become a huge rage.

Lending the proceedings a perfect dose of chutzpah and mischief, Madhuri's lissome elegance shines through the evocative temperament of its contents. 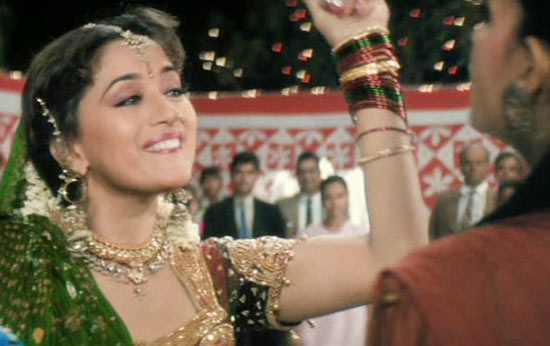 The agile beauty shows off her efficient footwork yet again while communicating the playful innuendoes of Channe Ke Khet in the exceedingly gory, Anjaam.

While the movie, pairing her with Shah Rukh Khan, was nothing short of a blood fest, it featured a couple of songs worthy of note. 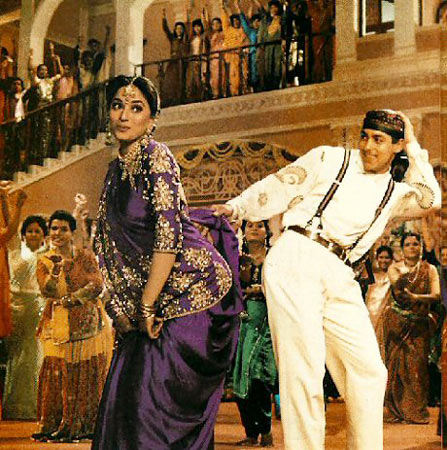 Weddings and celebrations mark the A to Z of Sooraj Barjatya's family-oriented musical.

Even so, among the many festive notes it hits Didi tera devar ranks as most popular.

Madhuri's expressive range and comic timing comes forth in her playful depiction of a pregnant woman followed by a flirtatious banter with Salman Khan in its ever-so spunky picturisation. 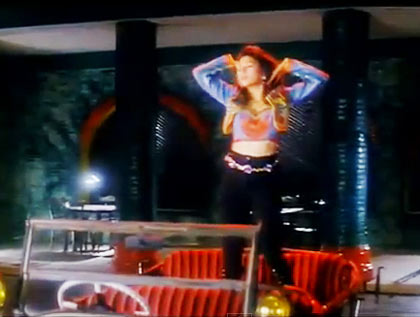 The longest reigning queen shakes a leg and butt with much gusto, taking away our attention from the dreadful dancing skills of her partner Sanjay Kapoor in Indra Kumar's surprisingly successful, Raja.

Then again, Madhuri is in so much sync with the rhythm, it's hard to notice anything else. 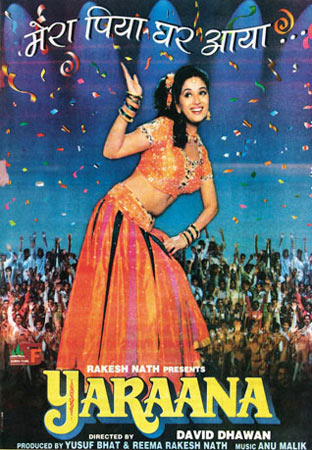 You're forgive for not remembering Madhuri Dixit ever worked in a lousy remake of Hollywood's Sleeping With The Enemy called Yaarana, which was directed by David Dhawan, no less.

But it's a shame if you cannot recollect her live wire act and unmistakable zest while pounding her feet to the beats of Mera Piya Ghar Aaya O Ramji. 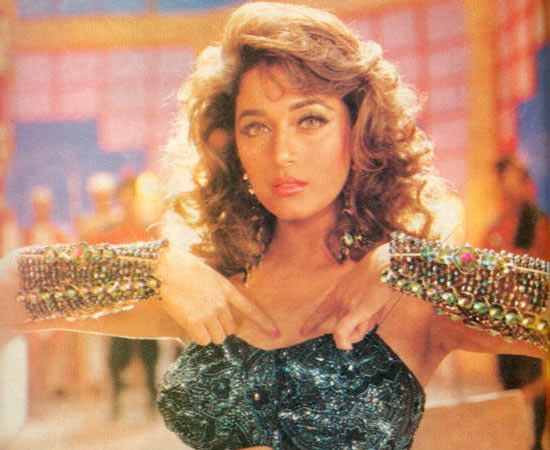 Bollywood's attempt at a Robin Hood brand of fantasy turned into a box-office disaster but Madhuri's dance remains of the best-remembered aspects of Rajkumar.

Not to forget, THOSE moves. 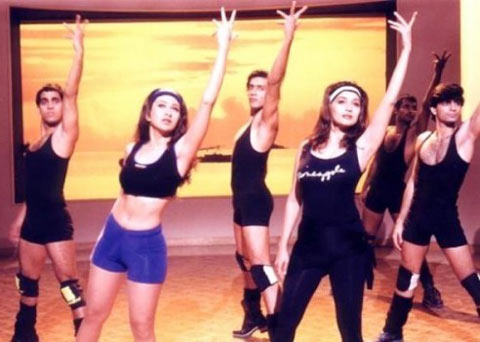 It's always exciting to see two great dancers in a face off.

It's not just the synchronisation but the energy and complex vibe between their characters that makes it all the more alluring. 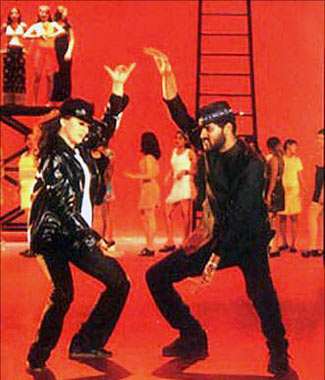 Speaking of terrific dancers with distinct style, nothing like a Madhuri-Prabhudeva combination, is there?

The duo matches steps and attitude to sizzle in the spectacularly choreographed Que Sera Sera from Pukar.

How about Madhuri and Hrithik Roshan next? 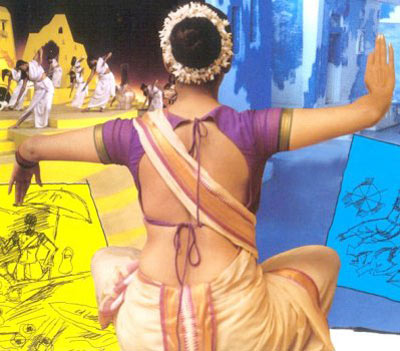 The heavily symbolic film by painter M F Hussain may not have found many takers but that doesn't make it any less intriguing.

In Gaja Gamini, he paints his muse Madhuri Dixit in the shades of abstract and poetry.

The title song doesn't show her face with the entire focus lying on her curvaceous behind while she performs classical dance draped in a traditional nauvari and backless choli. 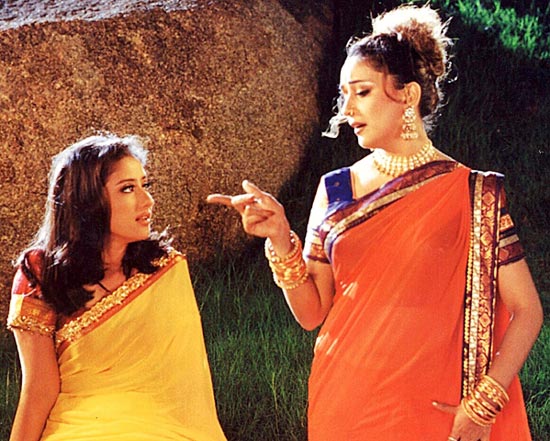 Madhuri plays Janki, a theatre actress and during one of her interactions with Manisha Koirala breaks into an impromptu jig that reiterates her stature as a dancer par excellence and our capacity to be enamored each and every time. 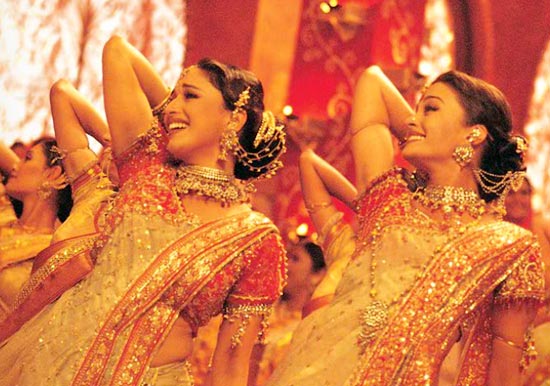 Paro and Chandramukhi dancing together is a preposterous idea.

Not so much. With Dola re, the splendid duo pitches in their best show, without any attempt to outdo another, demonstrating a genuine commitment for the art form. 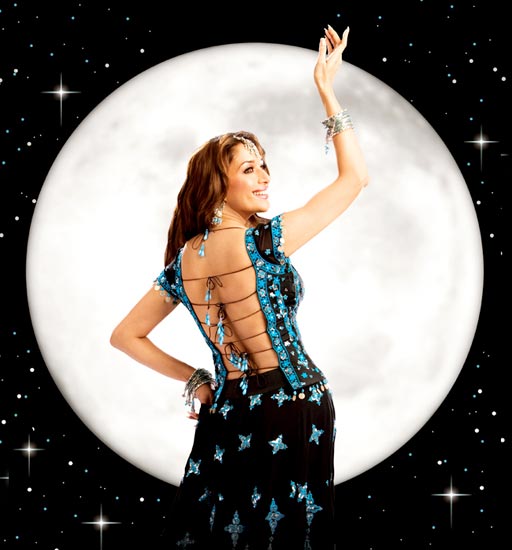 After a five-year long absence, Madhuri returned in a subject befitting of her skills.

The mostly dance-oriented theme of Yashraj Films's Aaja Nachle felt like an ideal comeback for the star.

And though the movie bombed, everyone had nice things to say about the actress and her marvelous show, packed with oomph, pizzazz and elan, in its catchy title track.